Labor has pledged to set up an independent national environmental watchdog if elected, holding back its most significant green commitment until the eve of the federal election.

While climate change has been a prominent election issue, environmental protection initiatives from both major parties have been largely missing from this campaign. 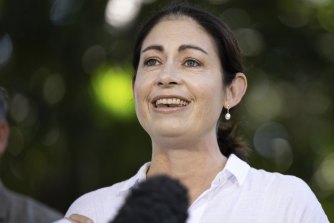 Labor’s environment spokesperson, Terri Butler, says the party will establish an independent environment protection agency if it is elected.Credit:Alex Ellinghausen

Labor’s commitment to establish a federal environment protection agency opens up a major point of difference with the Coalition less than 24 hours before polls open.

Green groups welcomed the promise, with the influential Labor Environment Action Network (LEAN) saying it would be “deeply significant in turning around the collapse in Australia’s environment”.

A “tough cop” watchdog to ensure major projects complied with development restrictions was one of the recommendations of Graeme Samuel’s 10-yearly review of federal environment protection laws last year.

Environment Minister Sussan Ley has ruled out a “tough cop” regulator and pledged instead a federal “assurance commissioner”, which would not have powers to investigate approvals for individual projects like mines and property development, but would instead review the federal government.

Opposition environment spokesperson Terri Butler said she would consult with green groups and stakeholders on the design of the agency, which would “restore trust and confidence in environmental decision-making”.

“Australia’s environment is in crisis, our national laws are not working, and the Morrison-Joyce government have failed to deliver any legislative reform,” she said.

Since colonisation, about 100 of Australia’s unique flora and fauna species have been wiped out. In February, koalas were added to the endangered list in NSW and Queensland.

Environment regulations are among the last sets of federal laws that depend on ministerial discretion to direct the department to check if major projects are complying with laws to protect critical habitats and threatened species. Most other regulations have an independent compliance agency such as the Australian Competition and Consumer Commission and the Australian Prudential Regulation Authority.

“An independent environment watchdog is vital to enforce Australia’s environment laws and ensure communities have the information they need to participate in decisions about the environment,” Milthorpe said.

Humane Society International’s Nicola Beynon said under the current “weak laws”, the federal government had “allowed an environmental catastrophe to unfold over many years to the point where even our beloved koala is at risk”.

“LEAN will be part of the chorus supporting a brave and innovative approach that gives business certainty, unblocks delay and revolutionises our approach to protecting our heritage,” she said.

Labor last week promised $195 million for the Great Barrier Reef and $225 million for threatened species in a mix of new and previously announced funding. It would be in addition to the Coalition’s $1 billion funding package for the reef over 10 years announced in January.

The Coalition in March promised $128 million for controversial reforms to make state governments responsible for assessing the environmental impacts of major project developments.

Cut through the noise of the federal election campaign with news, views and expert analysis from Jacqueline Maley. Sign up to our Australia Votes 2022 newsletter here.