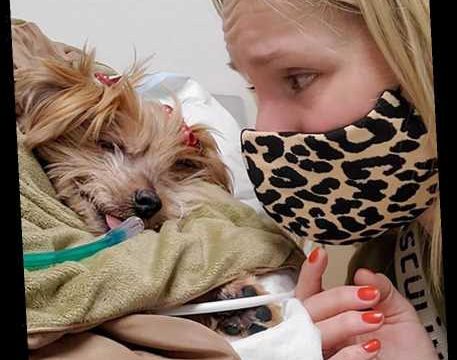 Kristen Bell is mourning the death of her dog, Barbara.

The Good Place star, 40, revealed on Friday that she and her family were saying goodbye to their beloved pooch after Barbara fell ill with an intestinal infection.

"Our beautiful @barbarabiscuits got sick this weekend. Vet diagnosed Giardia, and it looked like for a while like Barb was gonna pull through," she began in a series of posts on her Instagram Stories. "Even though Barb is a (gorgeous) fighter, shes gone septic and her lil body doesn't look like it's gonna pull through."

"On our way now to say goodbye," Bell wrote alongside an emotional selfie. "Trying to stay super grateful for the 2 years we got to spoil her like the Queen that she is." The actress also thanked The Dog Cafe in Los Angeles for "bringing her into our lives" before sharing some photos from the veterinary clinic.

In one shot, Bell's daughter can be seen petting Barbara as the pup is connected to tubes. Another picture showed the mother of two — who shares Lincoln, 7½, and Delta, 5½, with husband Dax Shepard — face-to-face with her canine companion.

"We love you Barbara," Bell captioned.

Giardia is a microscopic parasite that causes a diarrheal disease known as giardiasis, according to the Centers for Disease Control and Prevention. Both humans and animals can contract giardiasis. Bell has adopted several dogs in the past few years.

In 2017, the Veronica Mars alum opened up about her numerous furry friends, telling PEOPLE, "I’ve certainly been a lazy Mom to my pets, but never a bad Mom."

"I have treated all my dogs like my kids," she quipped. "To me, they’re just kids I didn’t birth."

An animal rescue advocate, Bell also said that she firmly believes in "adopting not buying" when it comes welcoming more pets into her home.

"There are so many wonderful pets in shelters around the country ready and waiting to find a home," she explained. "If they don’t get adopted, they get euthanized. So breeding more animals just doesn’t make sense to me."