Since then they’ve covered off Psy’s iconic Gangnam Style for Triple J, released another smash single, Smashmouth, and been well and truly catapulted into the mainstream. They have a deeply loyal fan base, and their phone hotline is backed up with hundreds of voicemails from supporters (“That shit was the bulgogi!”).

After gigs supporting ARIA Award-winner Genesis Owusu at Sydney’s Enmore Theatre and performances at the experimental arts space Phoenix Central Park, 1300 are now set to play their biggest shows yet at the Sydney Opera House, as part of Vivid Live. After that, it’s onto the Australian festival circuit, playing the likes of Dark Mofo, Splendour in the Grass and Falls Festival.

For a band that has only been releasing music for a bit over a year these achievements are an extraordinary feat. But the five boys who make up 1300 seem rather unfazed by it all. “We just want to make music,” they tell The Sydney Morning Herald and The Age.

Their success is noteworthy, not just because of the quality of their music but because of how long it’s taken for a Korean-Australian act to break through in this country, especially as Korean culture – in music and on screen – has dominated globally in recent years. When asked about other Korean-Australian artists working here, 1300 say they know of only two – Yura and GDC – both still emerging.

A week out from their debut performance at the Opera House, 1300’s studio in Haymarket is humming with the best kind of chaotic energy. The group is made up of members Nerdie (Angus Jingoyo), Pokari.sweat (Jason Vuong), Dali Hart (Andy Lim), Goyo (Tae Kim) and Rako (Jihun Kong). They crowd around a laptop, tinkering with beats and throwing around different lines. A rogue flute lies to the side. Melbourne-based multi-instrumentalist and producer Nikodimos is visiting, and the six are collaborating on new music. 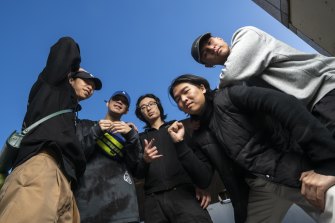 1300 mostly rap in Korean so to unacquainted ears lyrical comprehension is impossible. Instead, what resonates is the sonic quality of their voices. Staccato at times, low and disaffected at others, their voices merge seamlessly with the instrumentals for musical effect.

They shrug when asked about their choice of language in their music. “We don’t really think about it, Korean is just a language we were born with,” Rako says. What he seems to be saying is, Why wouldn’t we rap in Korean? Duh. “Korean is a good language to rap with” he adds. “It just flows well.”

It’s clear that the members of 1300 are friends as much as they are bandmates. Rako, Goyo and Dali Hart knew each other as members of the Korean-Australian music collective Aisleland, alongside artist Yura (they describe the vibe as “wholesome” and “supportive”). Nerdie, Pokari.sweat and Goyo had also gone to the same school (“Shoutout to Homebush Boys!“) but all graduated at different times and didn’t know one another.

They all finally became friends after meeting at a listening party for Yura, and started making music together in late 2020. “We clicked, and made three songs in a row,” says Goyo.

Their music evades simple definition – it’s a mix of hip-hop, punk, pop and more. Above all, though, it’s highly danceable – perhaps the reason why their songs resonate with audiences. “That’s the only kind of music I make,” says Nerdie, who brings influences like house, dubstep, grime, garage and jungle house to production.

The videos that accompany their music are just as experimental, exhibiting the signature playfulness and charisma that’s made them so adored. The video for their single Oldboy is an homage to the 2003 Park Chan-wook film of the same name, featuring recreations of scenes from the original.

“I [only] learnt about Australian music while doing 1300,” says Rako. “We’ve realised how many great talents there are in Australia. We were late.”

Late, too, is the Australian mainstream to Korean-Australian artists. “It’s been surprising to see the reaction to our music here, simply because we’ve never seen that [Korean music being celebrated] before,” says Nerdie. “It seems to correlate with the amount of popularity Korean culture in general has been having recently, which has probably opened up some gates for people to accept what we’re doing.” 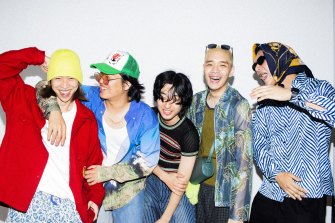 “It’s been surprising to see the reaction to our music here, simply because we’ve never seen that [Korean music being celebrated] before.”

Certainly, their growing stardom is in step with the rise in popularity of Korean culture, including the success of Netflix’s Squid Game and Parasite’s 2020 Oscar win, and subsequent marathon run in the Australian box office.

“It’s the right place, right time. It’s in the zeitgeist,” says Nerdie. Appearing on Triple J’s Like a Version to cover Gangnam Style, Nerdie says they chose the song because “there was nothing else – it’s hard to pick a Korean song because most people don’t know any of them.” When it comes to Gangnam Style, “whether they hate or love it, they know it”.

Still, they say the majority of their fans are Anglo, or at least non-Korean, Australians. “We’re grateful – they’re a good audience. They listen, they’re interested. But where are the Korean-Australians at?” asks Nerdie.

They’re now turning their attention to Korea, where they’re slowly developing an audience. It’s “harder to crack into,” Goyo says. “We’re not there, we can’t do any live shows.” The plan is to change this soon – they’ve already booked tickets to return there this year.

It’s not just in their audience where they’re seeing a lack of Korean-Australians, but across the music industry itself. “They’re all hiding!” or “They all get exported straight away,” they say. Historically, the Australian music industry has been hostile to non-white artists, who, facing little interest from record labels or festival line-ups, are forced to venture overseas.

“There’s no future for them here,” Nerdie says, referring to artists like Rose from the K-pop group Blackpink, who was born in New Zealand and raised in Australia. “So we’re the leftovers,” Pokari.sweat jokes.

These “leftovers”, it seems, are trying to change the rulebook, carving out a future for themselves and others like them.

1300 will perform for Vivid Live at the Sydney Opera House Friday 27 May.