Most Memorable ‘Saturday Night Live’ Hosts Over the Years

During her “The People’s Kourt” sketch on Saturday, October 9, the 40-year-old beauty entrepreneur impersonated older sister Kourtney Kardashian for a fictionalized version of the popular court series. She had some help as her sister Khloé Kardashian, 37, and their mother Kris Jenner, 65, made brief cameos as themselves. 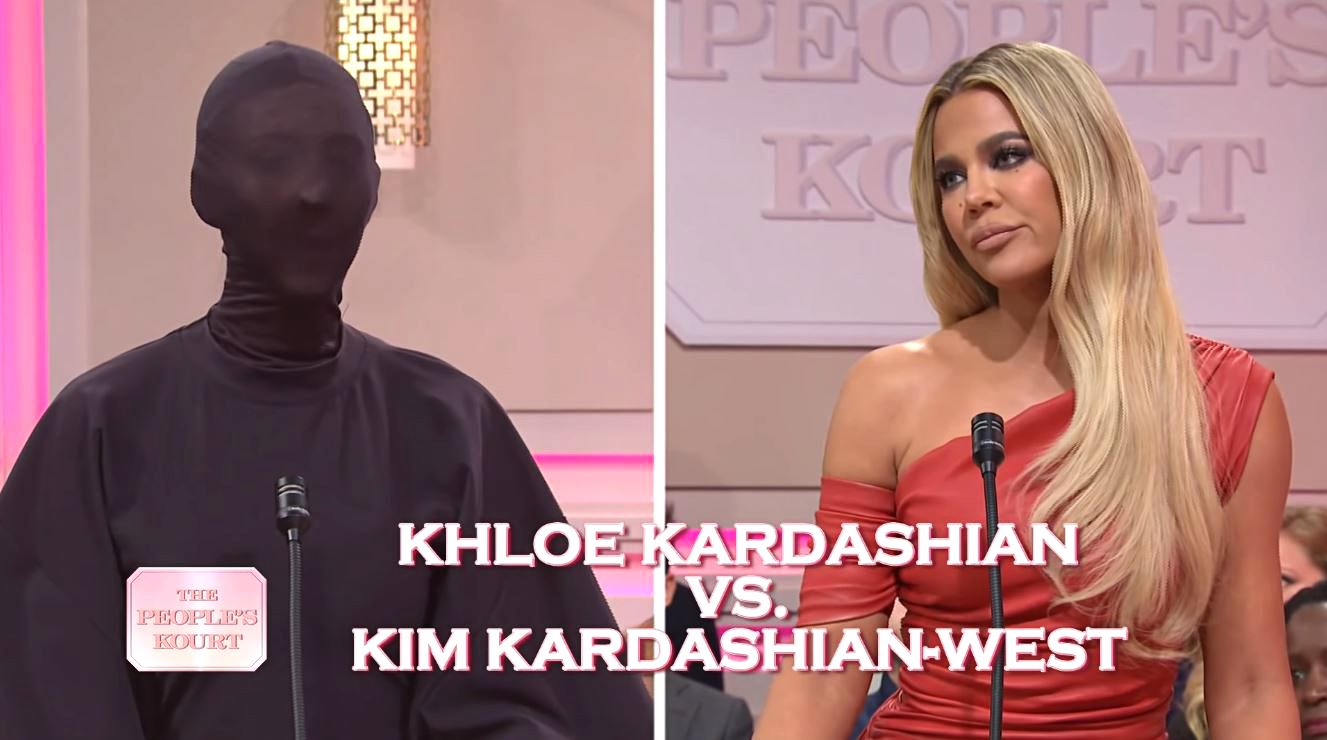 “Watch as she puts her judginess to good use to solve family problems,” an announcer said at the beginning of the skit as Kim made a variety of grumpy-looking faces, acting like her older sister. Kim added, “Order, order in the Kourtney! I’m good at this.”

As Kim-as-Kourtney presided over the proceedings, the Good American founder “battled” Heidi Gardner‘s Kim over makeup. Then, the talent manager claimed to “sue” her youngest daughters, Kylie Jenner (Melissa Villaseñor) and Kendall Jenner (Halsey). Kris jokingly battled Kylie — who is currently expecting her second child — for not giving birth soon enough, claiming, “I had Khloé in four months, do your kegel exercises and use your vagine.” 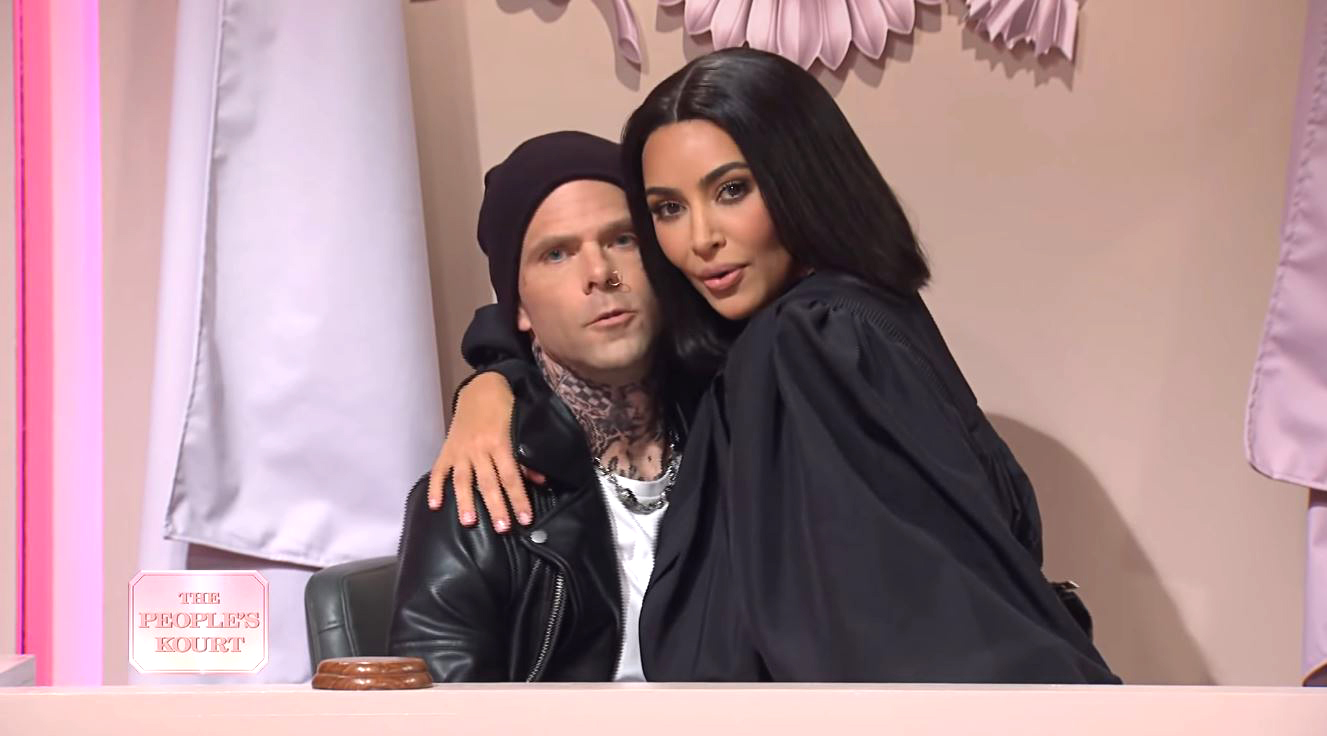 “Travis, Travis baby, ugh I have to do my show,” Kim said, sitting on the 41-year-old SNL star’s lap. “Oh my god, did you just call me your honor? Baby, you are so epic. Will you drum ‘All the Small Things’ on my ass when we get home?”

Following the Kravis spoof, Chris Redd impersonated the beauty mogul’s estranged husband, Kanye West, who said he was “suing Kim because people are always coming after me over what I tweet, but she hacked me” and claimed the Selfish author posted tweets about a Persian rug and the musical Wicked on his behalf.

The SNL skit ended shortly after Kim asked her “bailiffs and BFFs,” Machine Gun Kelly (Pete Davidson) and Megan Fox (Chloe Fineman), to escort the guilty parties away, but not before the 27-year-old King of Staten Island star — who is best friends with the “Bad Things” musician, 31, in real life — and Fineman, 33, could mimic the couple’s tongue-heavy PDA.

The Revenge Body alum and Kris also taped a sketch with Aidy Bryant and Kim. After having a fictionalized lunch with the Shrill star, 34, Kim wished the pair could “switch places.” With the help of a magic clock and a rhyming chant, the pair pull a Freaky Friday as Bryant lived her best influencer life as the Skims mogul and Kim became the comedian. 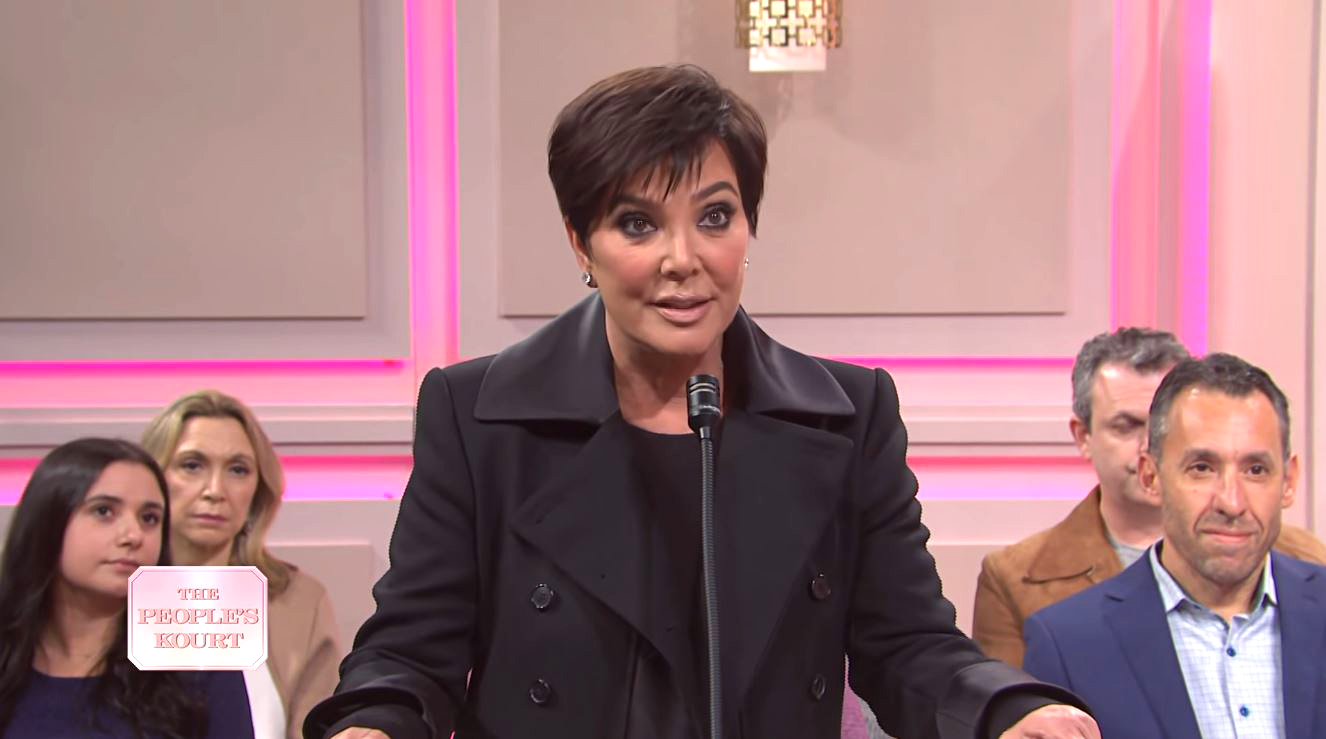 Throughout the night, Kim didn’t hold back with her jokes. During her monologue, she notably roasted her sisters, the 44-year-old Yeezy designer, O.J. Simpson, Caitlyn Jenner and Corey Gamble.

“I’m Kim Kardashian West and it’s so great to be here tonight,” the KUWTK star said. “I know, I’m surprised to see me here too. I’m excited to be here tonight to show you guys that I’m so much more than just a pretty face and good hair and great makeup and amazing boobs and a perfect butt. Basically, I’m just so much more than that reference photo my sisters show their plastic surgeons.”

Earlier in the day, Kim was spotted with the “Gold Digger” rapper as they left their New York City hotel together.

The Selfish has been parodied by multiple cast members over the years on SNL. West has also performed on the show several times. In 2018, he sparked controversy when he wore a “Make America Great Again” cap and ranted. (The exes share North, 8, Saint, 5, Chicago, 3, and Psalm, 2.)

“I don’t know if they’ll invite us back ever,” Kim told her sisters during an April 2019 episode of KUWTK. “I know that Kanye is always going to be Kanye and I’m never trying to change that. I mean, that’s who I fell in love with and I’m not trying to change who he is.”

For more, watch the video above!