Kechi Okwuchi is a survivor. As one of two survivors in the Sosoliso Airlines Flight 1145 crash on December 10, 2005, the now 31-year-old is a proud advocate for burn survivors and face/body equality. With third-degree burns covering nearly 65% of her body, her recovery process includes an outpouring of self-love and resilience while doing her own inner work.

“The accident happened when I was in the middle of my senior year of high school,” Okwuchi told ESSENCE. “I was surrounded by a lot of kids who were just interested in trying to take the SATs and pass so no one really focused on me or really cared about me. If they did, they didn’t say anything to my face so I couldn’t even have any kind of negative feeling about it,” she said of her transition into school following her recovery treatment. 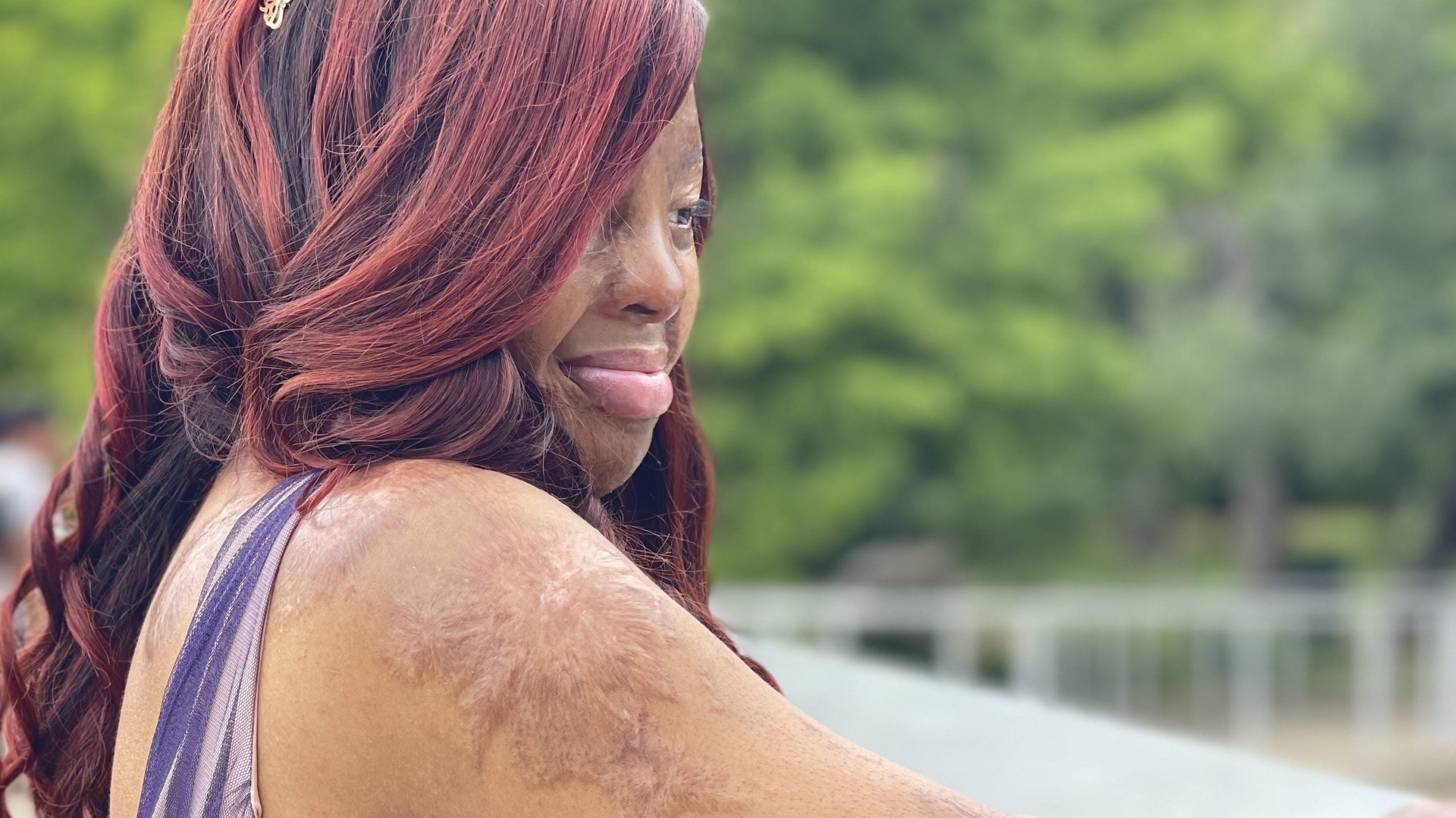 Okwuchi described her return to everyday life as “very miraculously smooth” and said she rarely experienced any maltreatment from her peers or the rest of the world. Unfortunately for some burn survivors, this isn’t always the case.

Aligned with her passion for facial diversity and inclusion, Okwuchi has partnered with the Phoenix Society for Burn Survivors to raise awareness for Face Equality Month. The movement originally started in the United Kingdom, but later spread its international wings to Arizona and to a headquarters in Michigan as a means to bring attention to the discrimination those with facial differences experience.

“The whole point is to increase solidarity among different groups of people and organizations that are essentially trying to eliminate this issue,” Okwuchi said. “We want people to realize that this is an issue, and then to start facing how to address this issue because people that look different oftentimes get treated differently, even though they are no different from people who don’t look different.”

As not only a survivor and advocate but a public figure as a singer, Okwuchi fully recognizes the power of her platform. Since her viral America’s Got Talent audition in 2017, Okwuchi’s fanbase has grown exponentially and the show’s supporters showered her with love and admiration from the beginning. With all eyes on her, she wants to be an example of authentic, free living through any circumstances.

“I don’t hide behind anything. I don’t hide how I am, how I look from the world. I want people to feel like they can be their genuine selves in any given situation because that’s the way that they’re supposed to be. That’s the way to be really happy in this world,” Okwuchi said vibrantly.

When it comes to her voice, she’s still in shock about how much music has served as a healing tool during her recovery. “I didn’t see it coming, even before the accident,” she said about the impact of music on her life. “It was there before I even opened my eyes from the coma that I was in after the accident happened. In my comatose state, I would hear my mom singing to me. I would hear music playing beside my bed. That really became an anchor to reality for me.”

After the accident, Okwuchi noticed that her voice changed significantly, and to this day, experts don’t know how or why this is the case. Though she loved singing before, the difference in her voice allowed her singing to take new heights. Okwuchi said it’s “the one positive thing that came out of this really tragic situation.”

Singing became Okwichi’s escape in the midst of her difficult new reality. “It was the one thing I could do in the middle of all those surgeries and everything that didn’t hurt. It was something I could do lying down, sitting up. Whatever I was doing I could sing,” she said. “Surgeries hurt, but music never hurt.”

When she was moved from Nigeria to America for reconstructive surgery, the doctors noticed her love for singing and decided to include music therapy in her treatment. She’s grateful to Shriners Hospital in Galveston for being a safe place to begin her journey as a burn survivor. As she reentered society and started going back to school in full compression garments, face mask and splints, she kept singing as a hobby but never considered pursuing it professionally.

“I didn’t feel like there was a place for someone like me in the industry,” Okwuchi admitted. “Even if I wanted to pursue music, I looked too different no matter how good my voice was. I didn’t even think my voice was that good to compete in anything.”

It was a friend who signed Okwuchi up for the AGT audition without notice. Today she considers that a blessing. “It healed parts of me that no amount of surgery could.”

Following her audition and noting the overwhelmingly positive response to her voice and her story, Okwuchi took the moment as a sign from God to be the voice for other people that she needed during her recovery. Her mission was amplified once she saw the response she got from the burn community, particularly children who hadn’t seen themselves represented on television prior to Okwuchi’s audition.

“Knowing that that’s the impact that someone like me could have on them, and if it gave them any kind of positive feeling or encouragement to pursue their dreams to go even as far as wanting to sing on a music show, then I had to take advantage of that,” she said. “I would say it’s definitely a positive thing, and I’m more than happy to represent the burn community because we need that.”