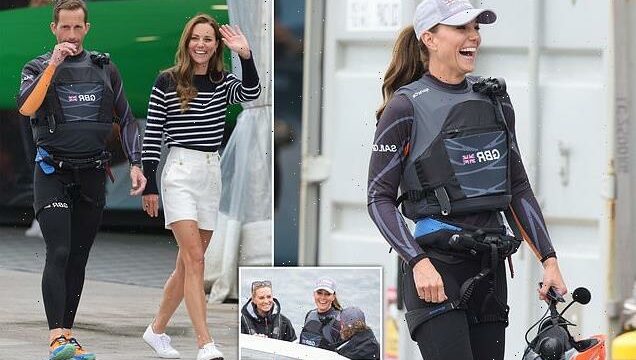 All aboard! Kate Middleton opts for nautical stripes and £199 white linen shorts as she joins Sir Ben Ainslie and Great Britain crew for ‘friendly Commonwealth’ race against New Zealand at the Sail Grand Prix competition in Plymouth

Kate Middleton looked ready to embrace her competitive side as she stepped out in Plymouth to take part in a catamaran race.

The Duchess of Cambridge, 40, donned a wetsuit as she prepared to join Sir Ben Ainslie at the Sail Grand Prix (SailGP) competition in Plymouth.

She paired the jumper with white linen shorts with gold buttons, from Holland Cooper and costing £199.

The Duchess of Cambridge paired her look with a pair of brilliant white Superga plimsolls costing £59 and simple huggie gold earrings. 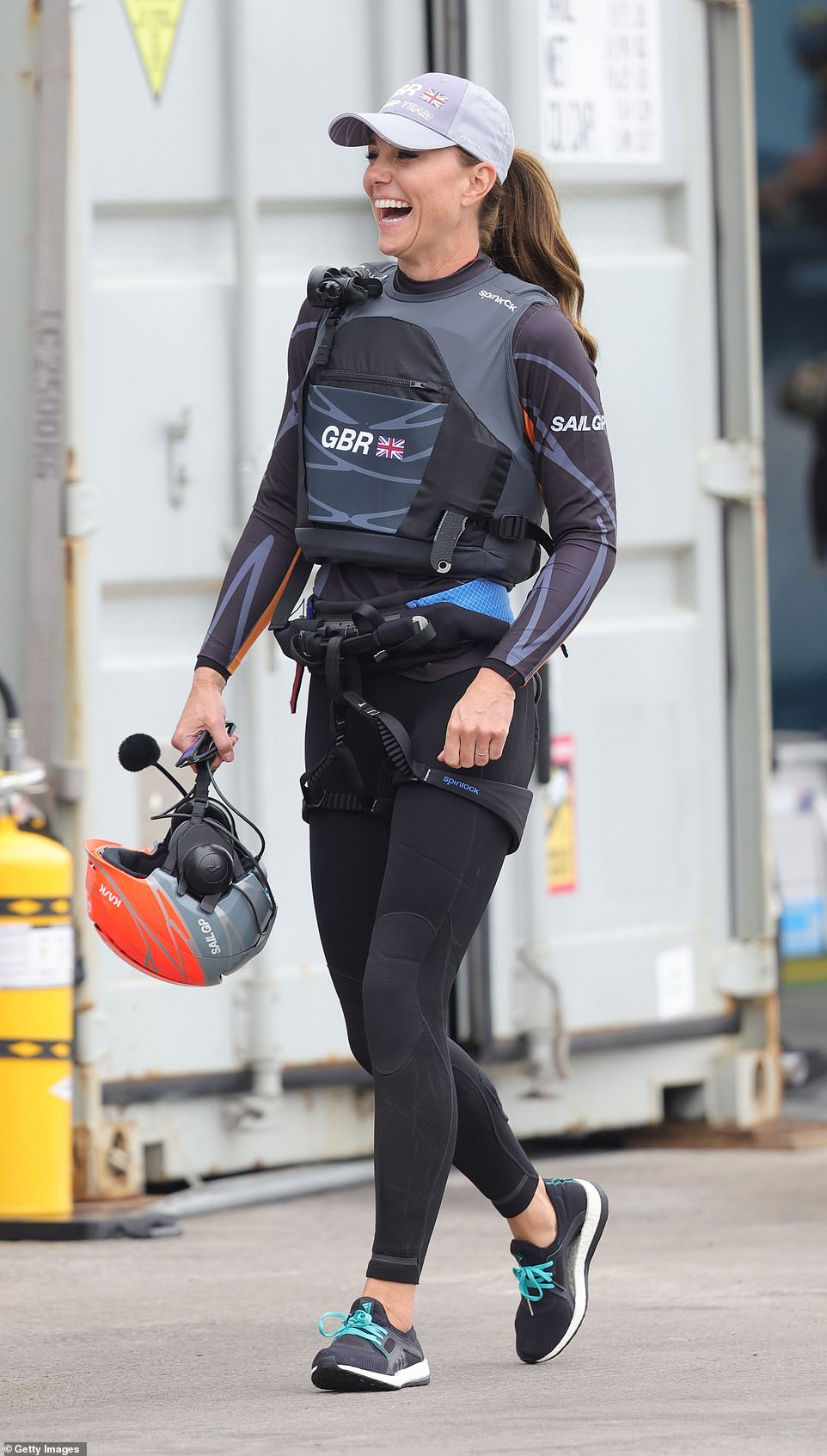 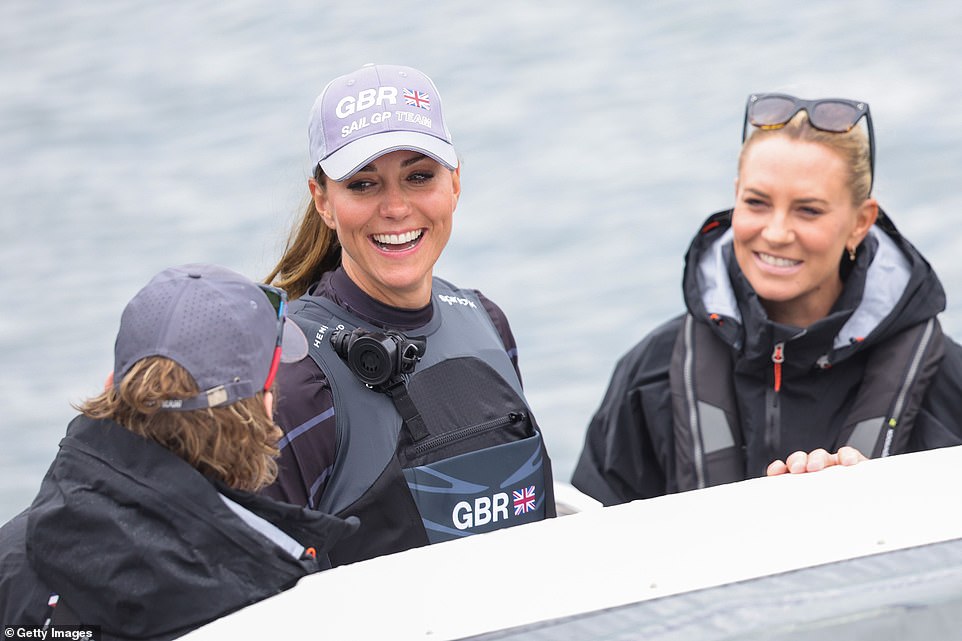 The Duchess was all smiles as she got ready for the race, despite fairly dreary weather in the background 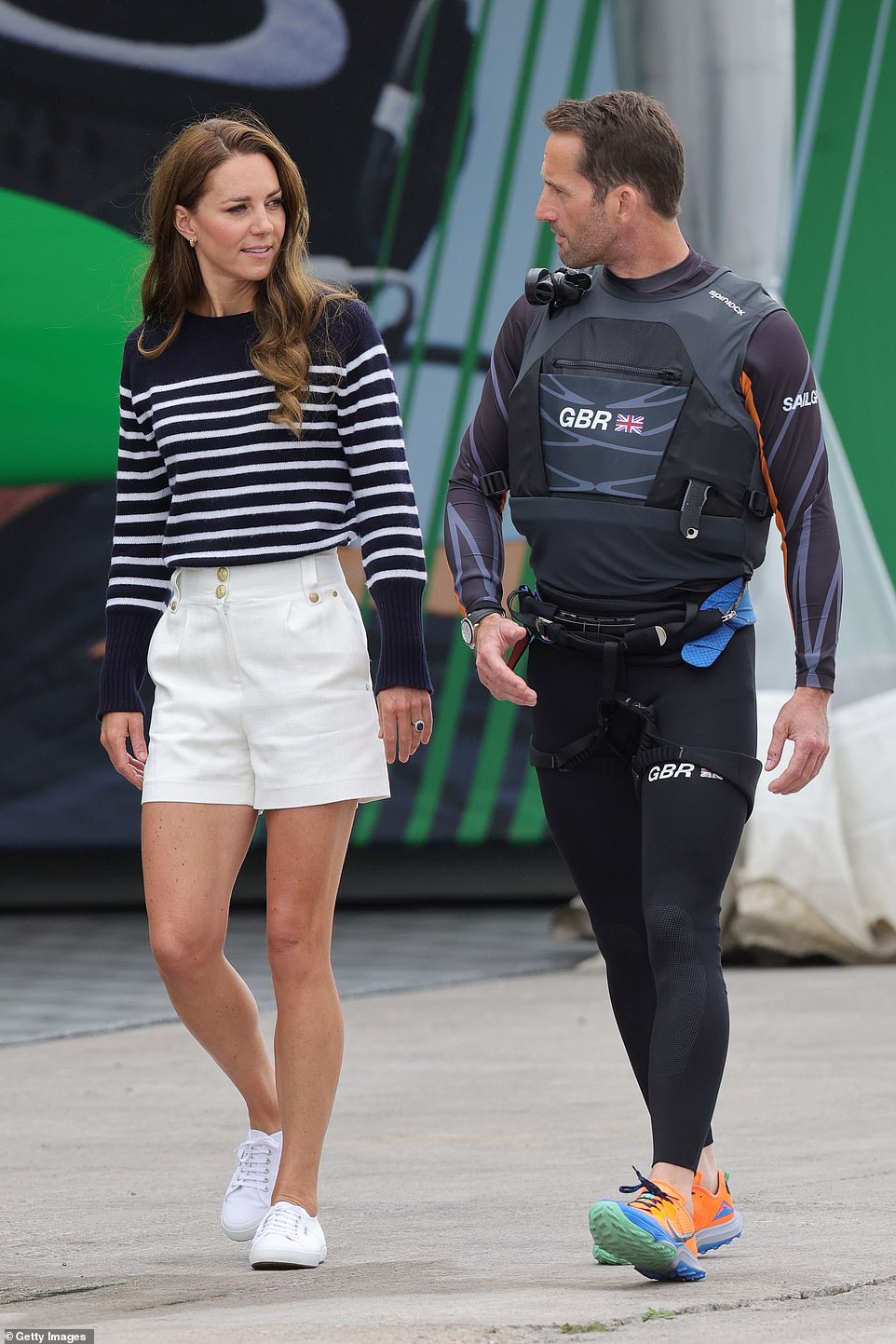 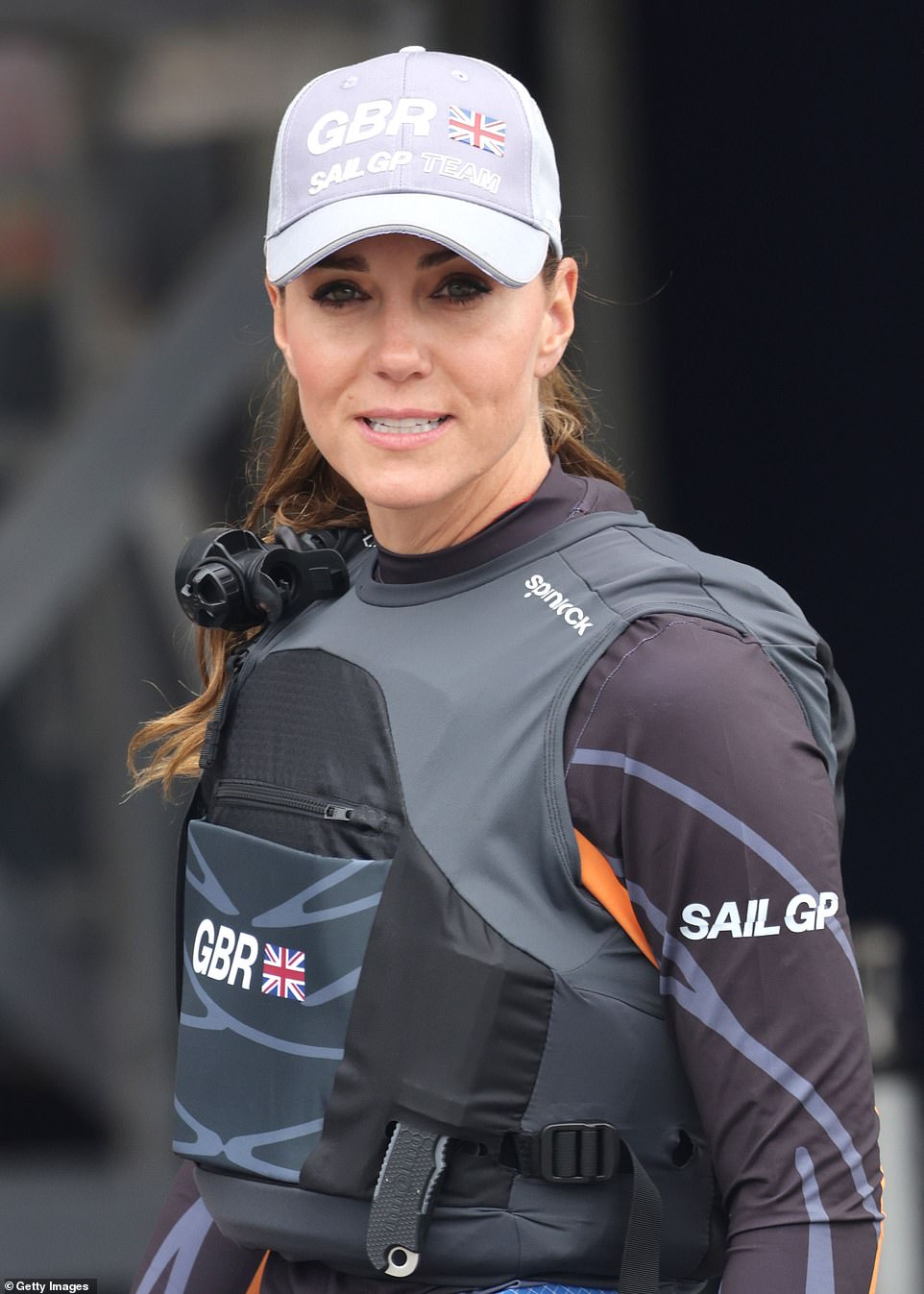 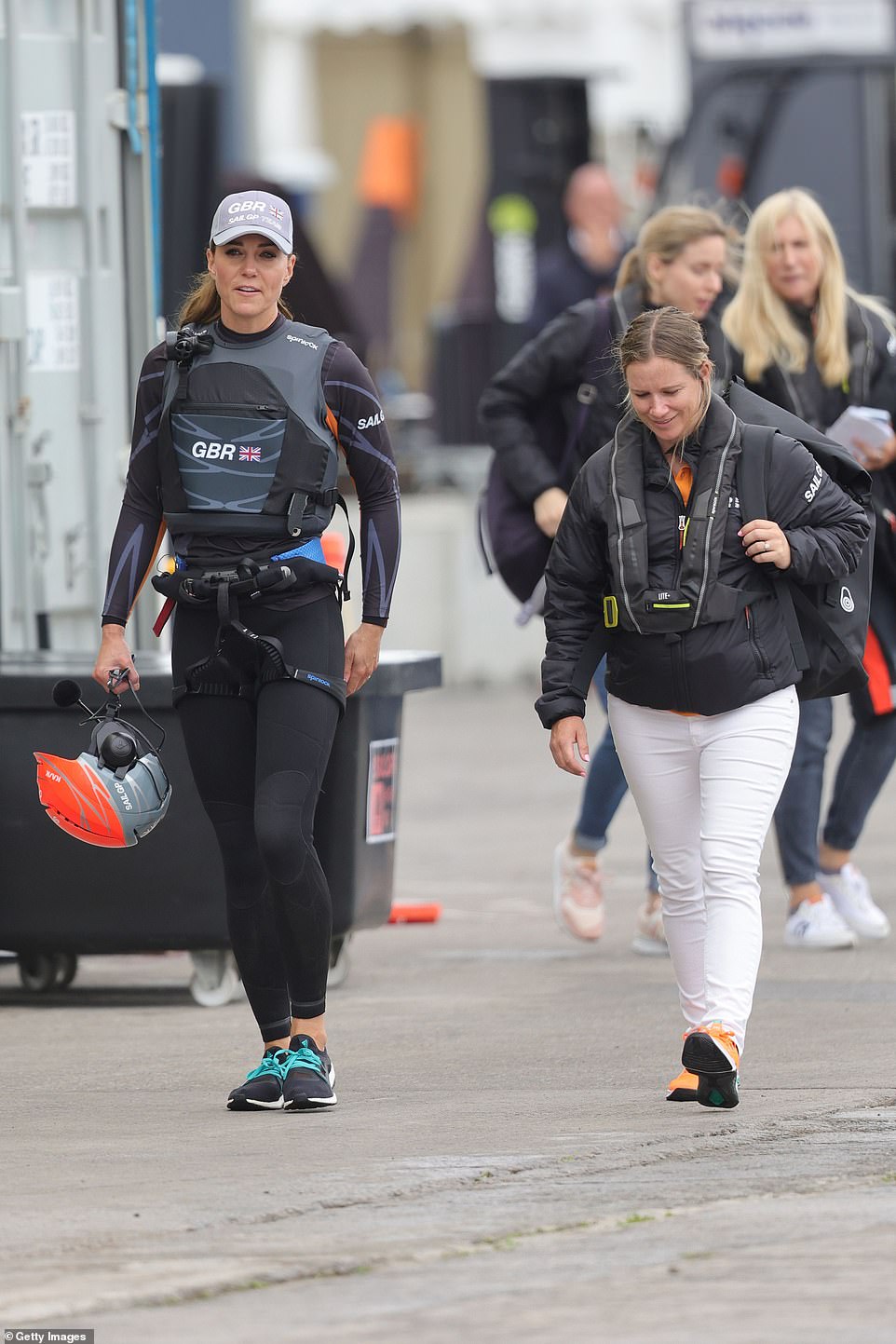 Kate chatted to Hannah Mills OBE, a competitive British sailor and two-time world champion of the Women’s 470 class, ahead of her race 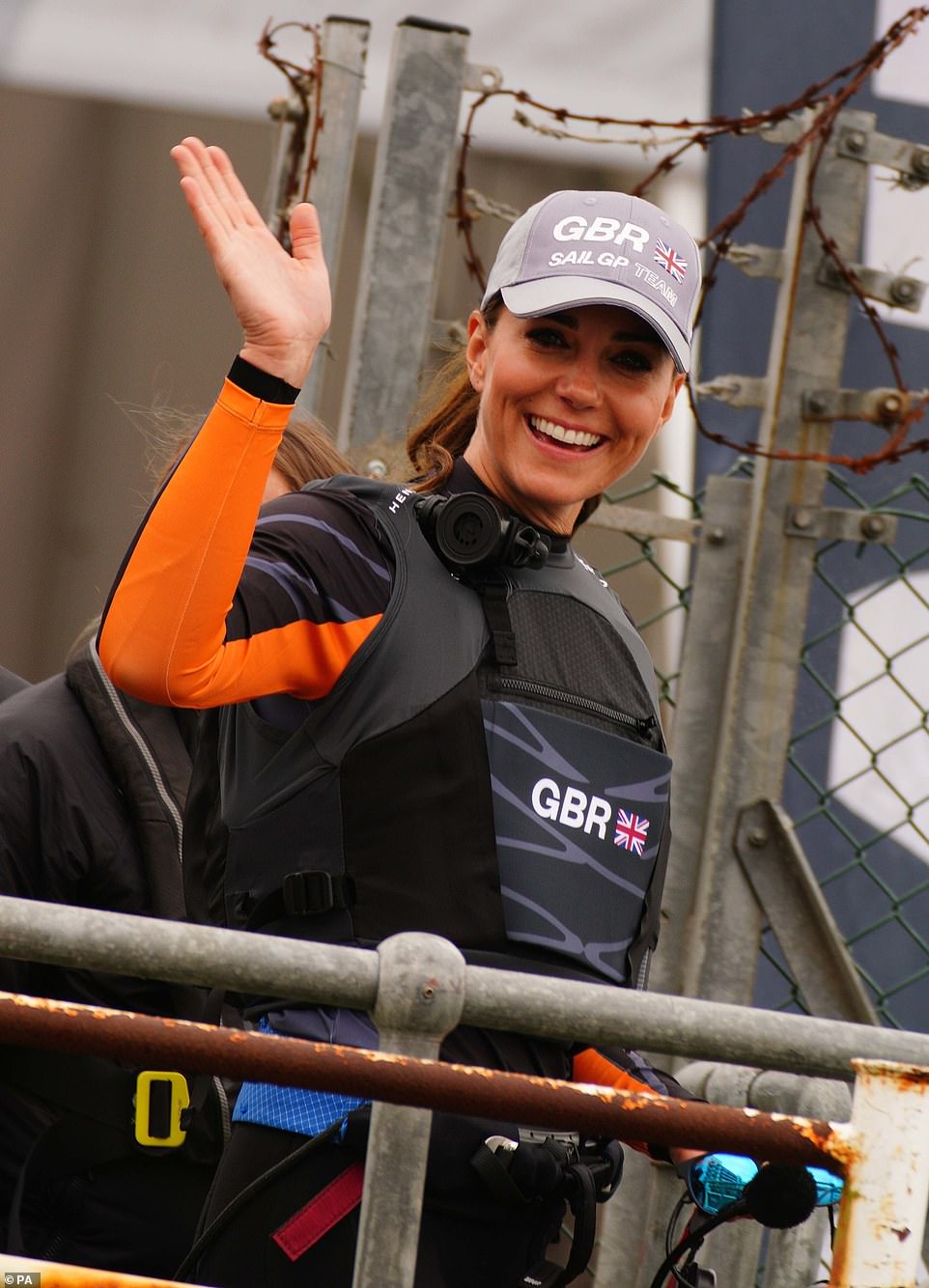 She might be in it to win it, but Kate still beamed for royal fans as she prepared to set sail 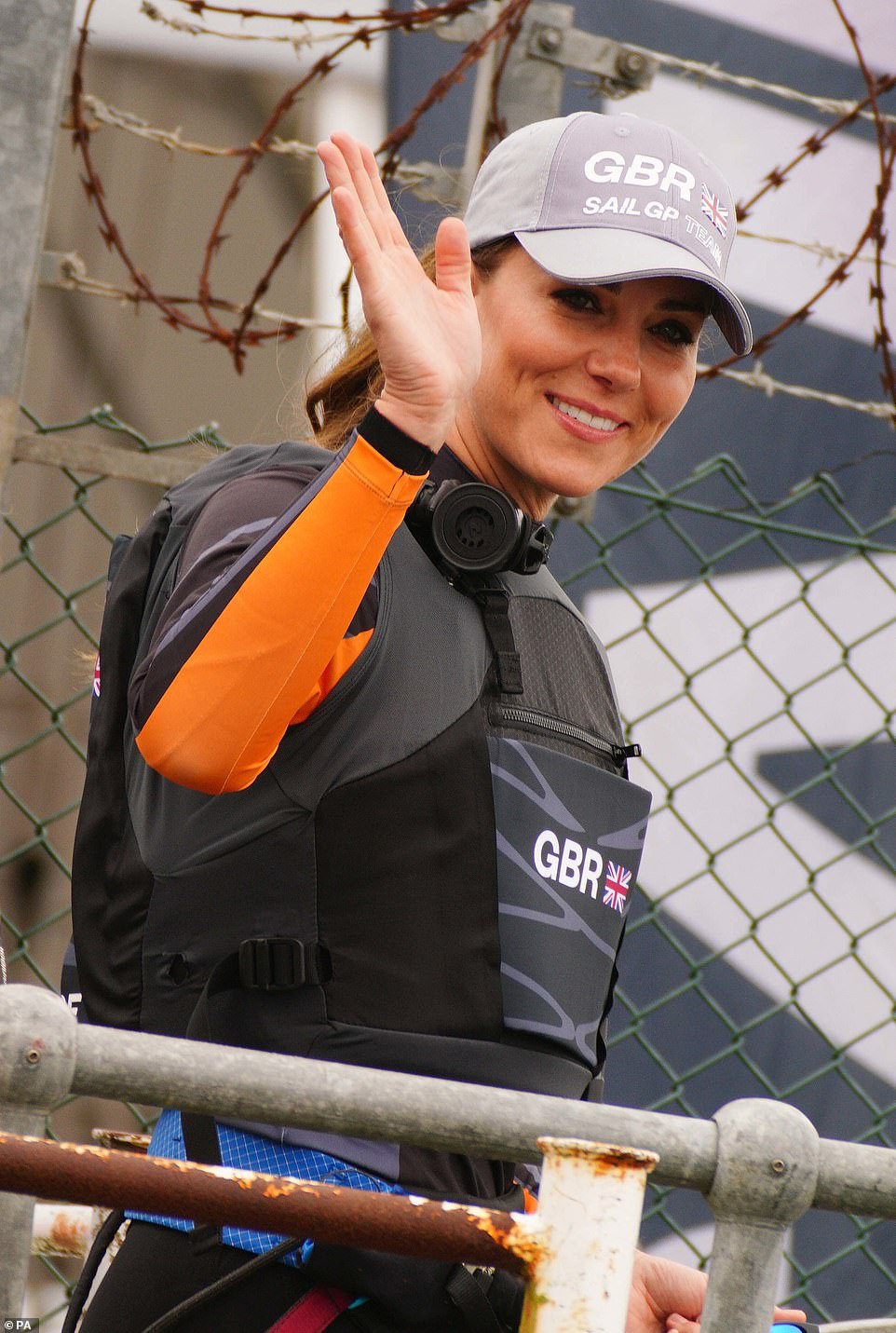 The mother-of-three, who has previously raced against her husband on catamarans, got ready to get in the wate 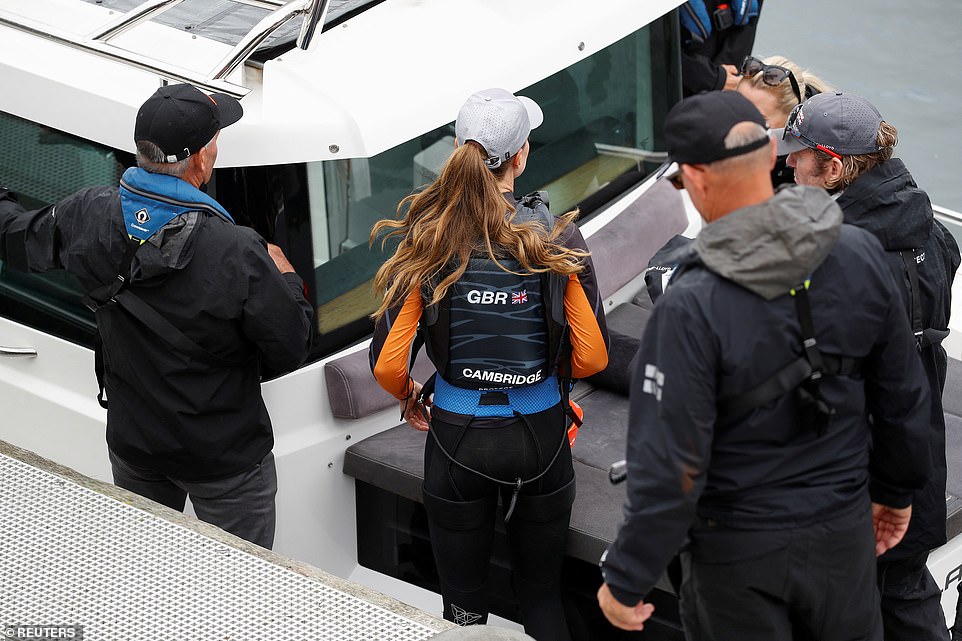 Proving she was a true team member, Kate’s GBR wetsuit had her name ‘Cambridge’ written on the back 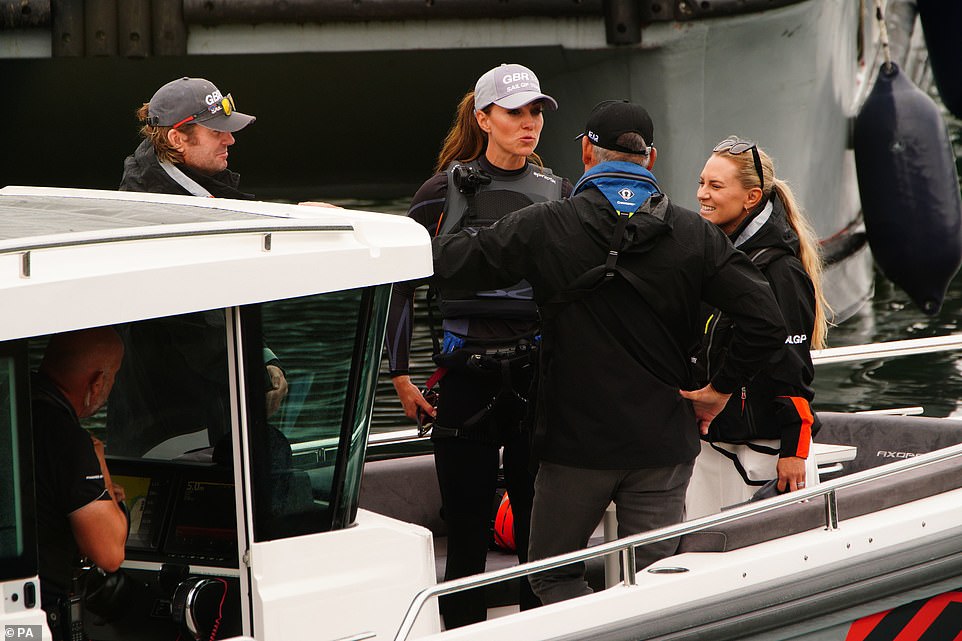 Kate, who proudly donned the GBR cap, chatted with other crew members as she prepared to set sail on a catamaran 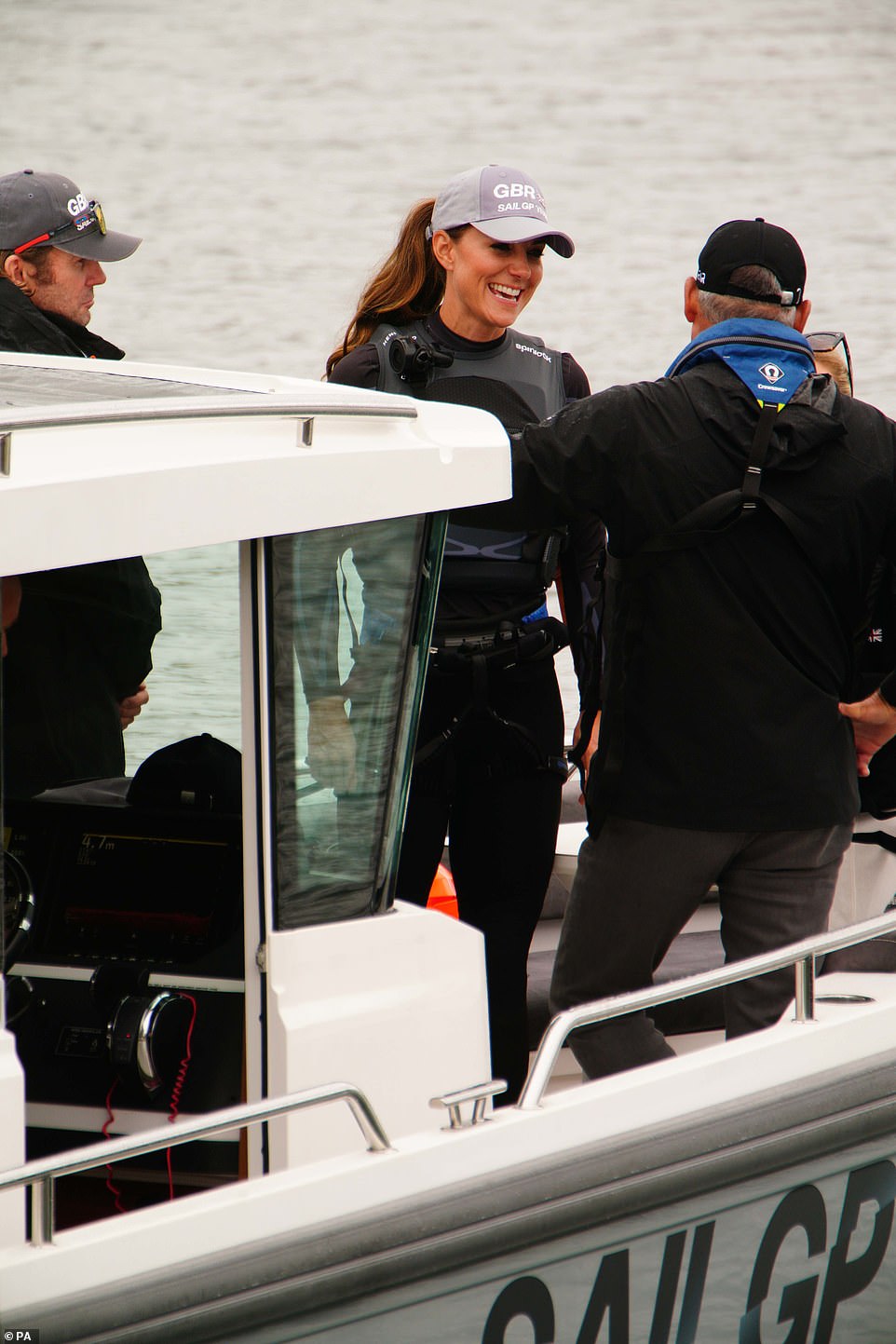 But her brunette locks weren’t down for long as she pulled them back into a ponytail to get ready to race against New Zealand.

Emerging after a quick outfit change, the Duchess was pictured in a grey cap and a GBR wetsuit, ready to join Sir Ben Ainslie and the rest of the Great Britain crew.

She was all smiles as she prepared for her race and beamed despite the cloudy weather – which could bring about choppy waters.

The SailGP competition, which is being held in Plymouth for the second year running, will see nine international teams take part in short races on high-speed Catamarans. 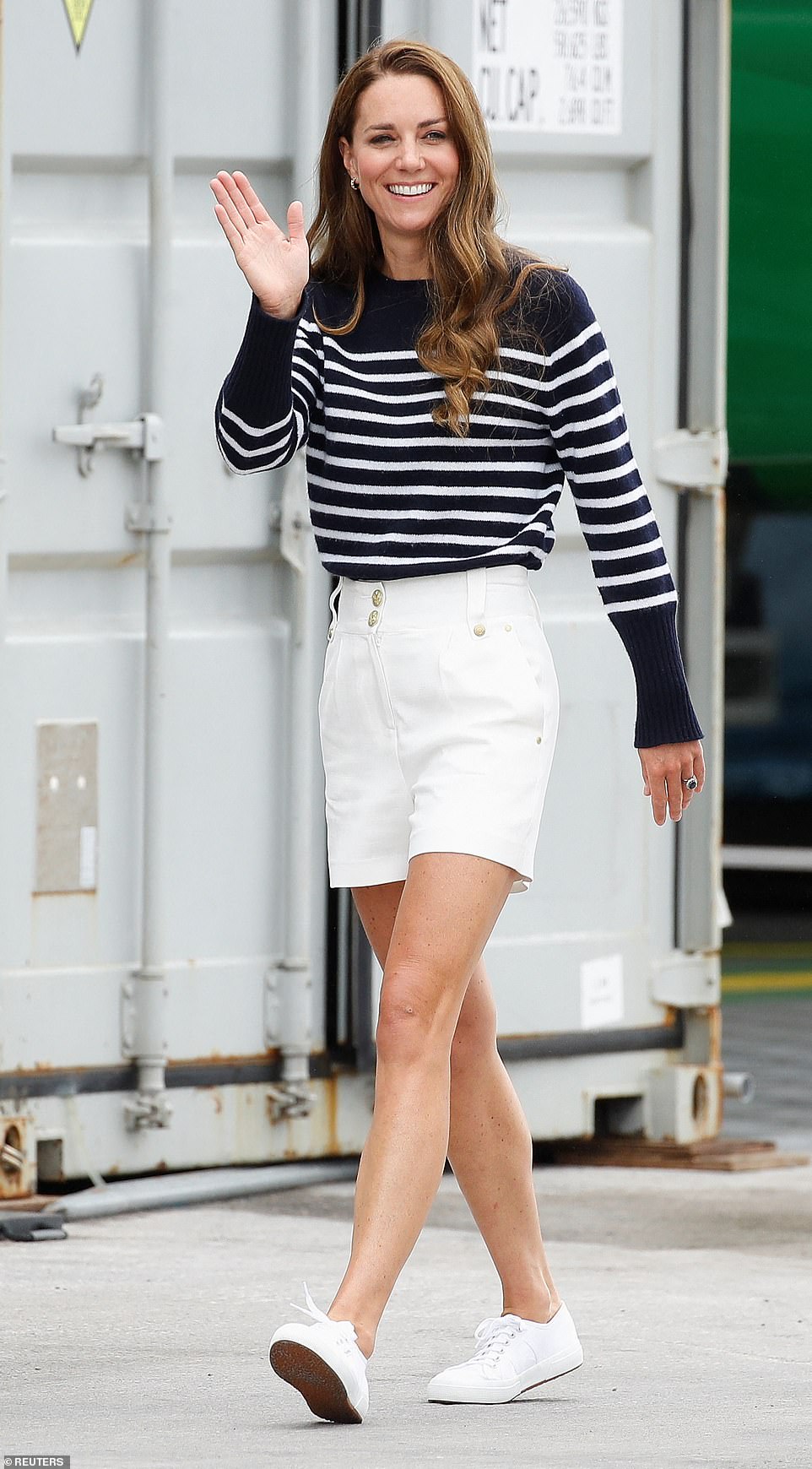 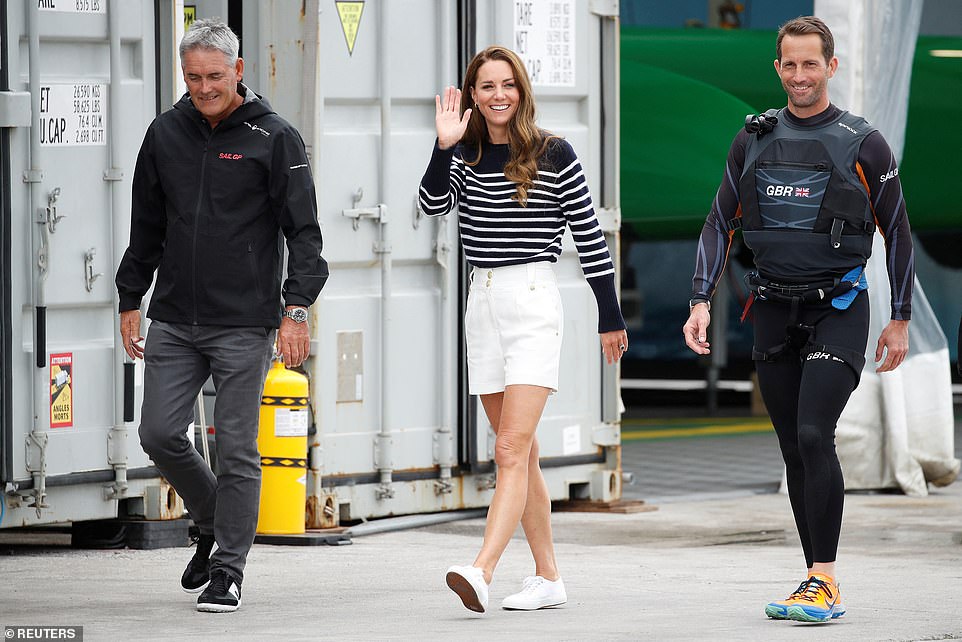 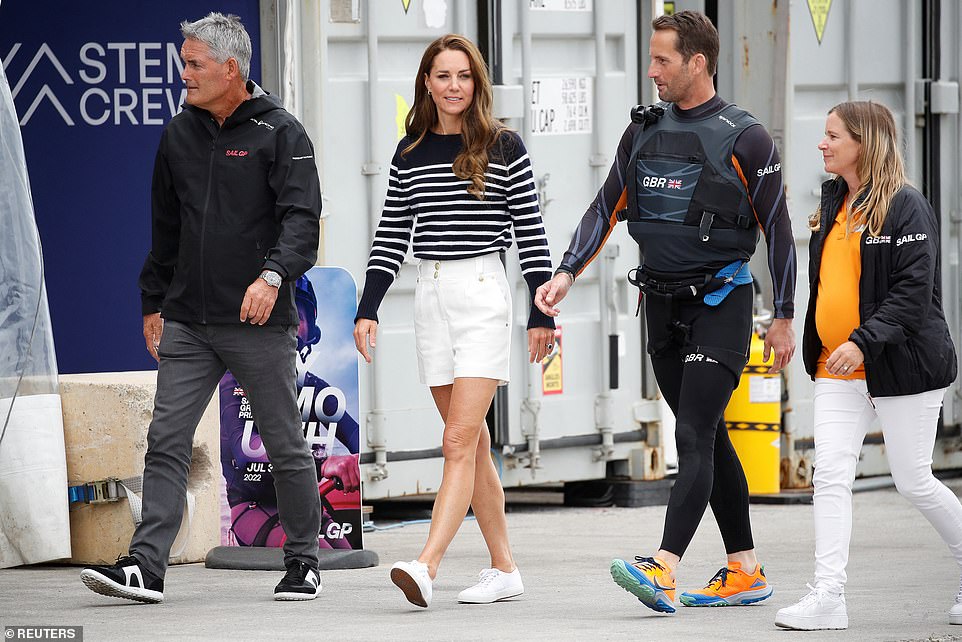 Game face on! The Duchess looked ready to give the race her all as she walked alongside her captain, Sir Ben Ainslie 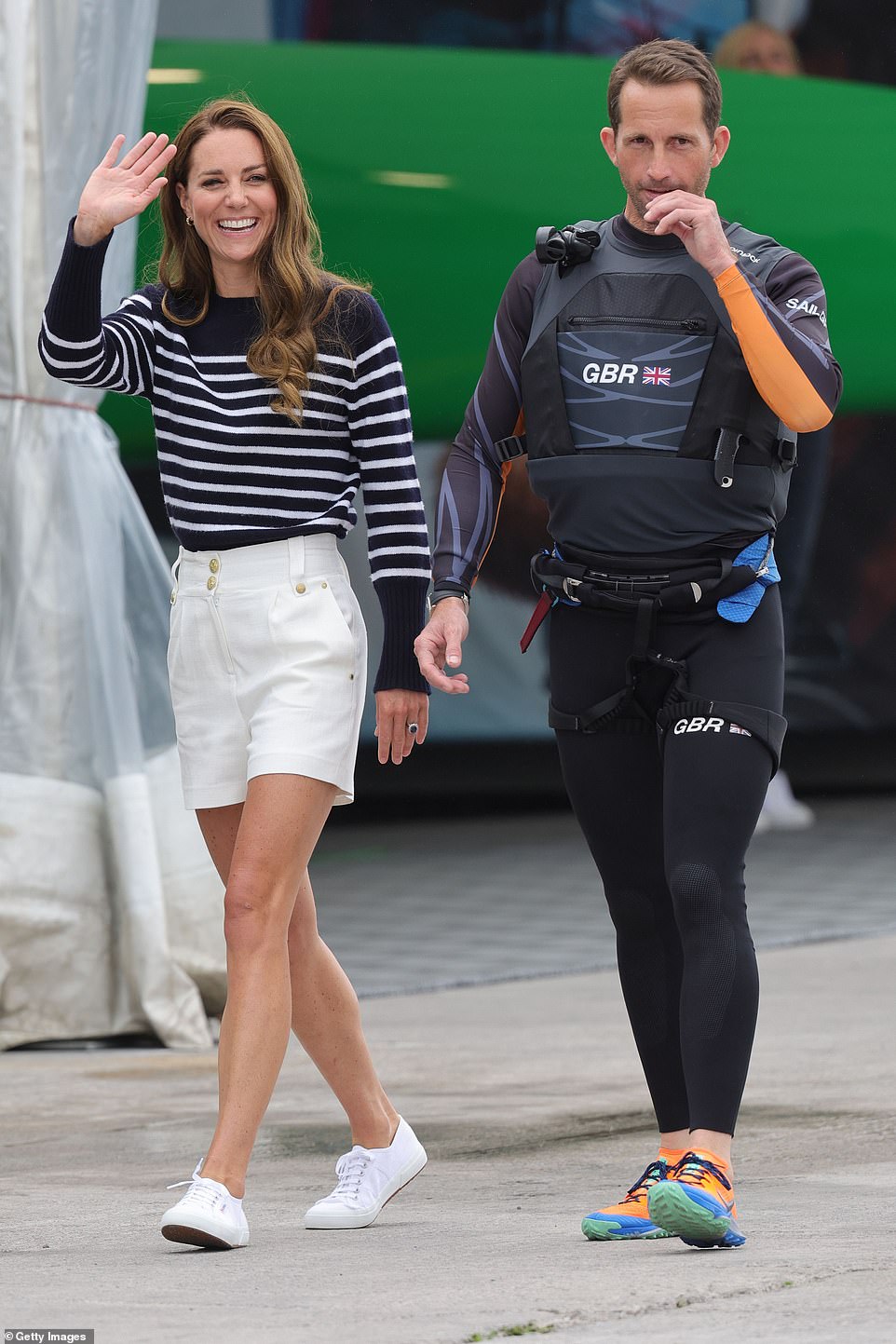 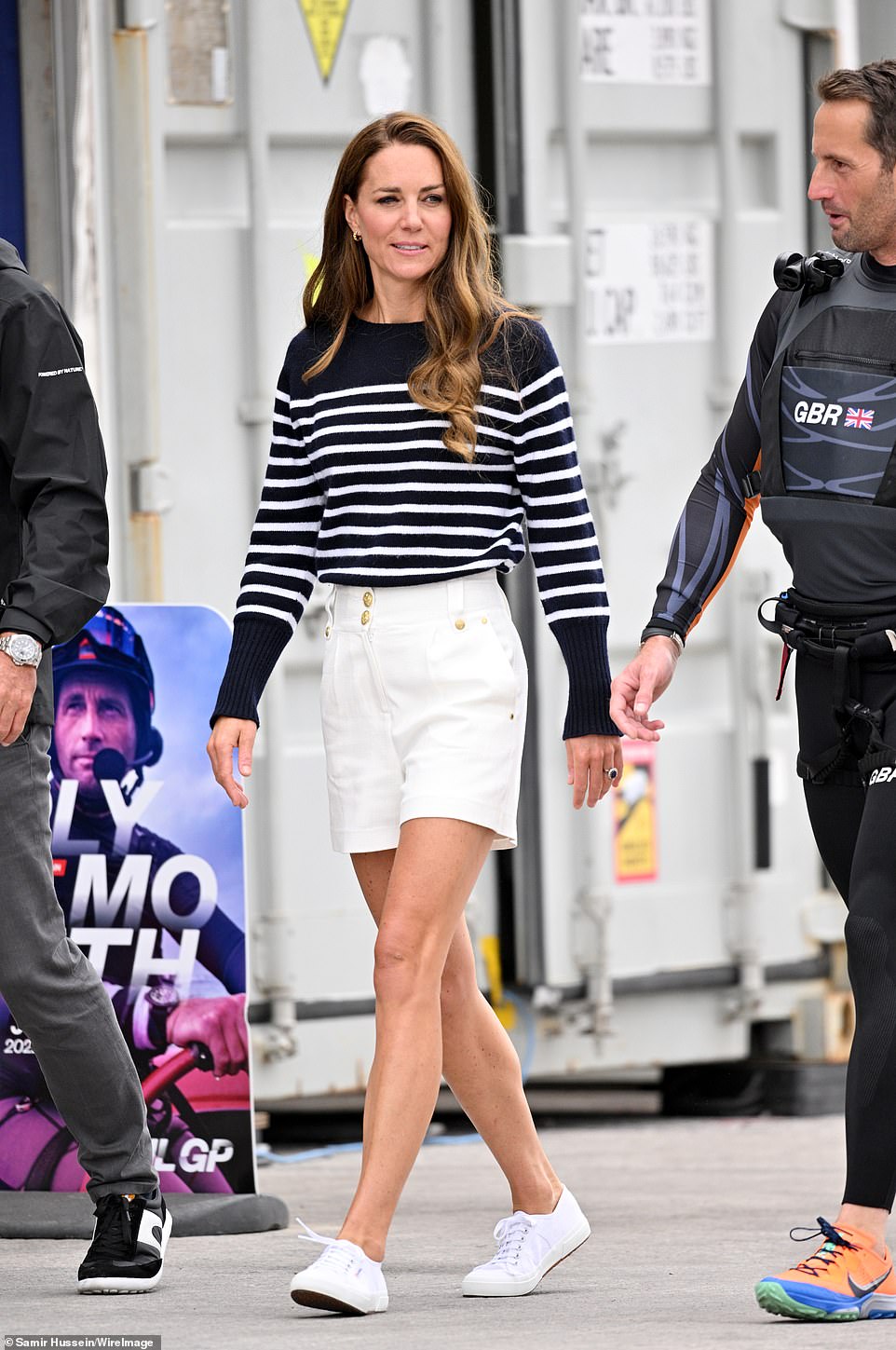 Kate wore long sleeves for the slightly chillier weather with a sea breeze and had her hair styled in loose curls, hanging over her shoulder on one side 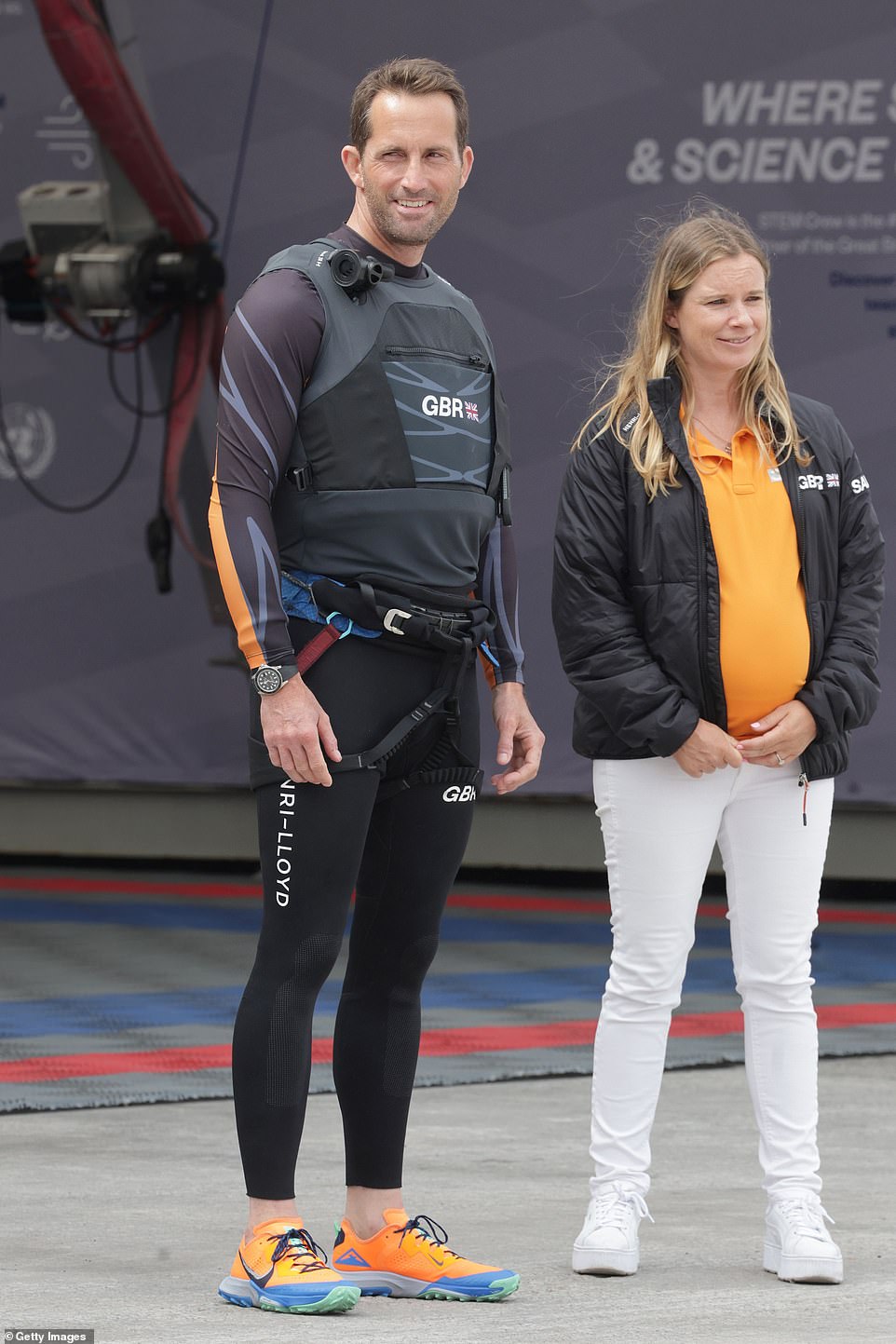 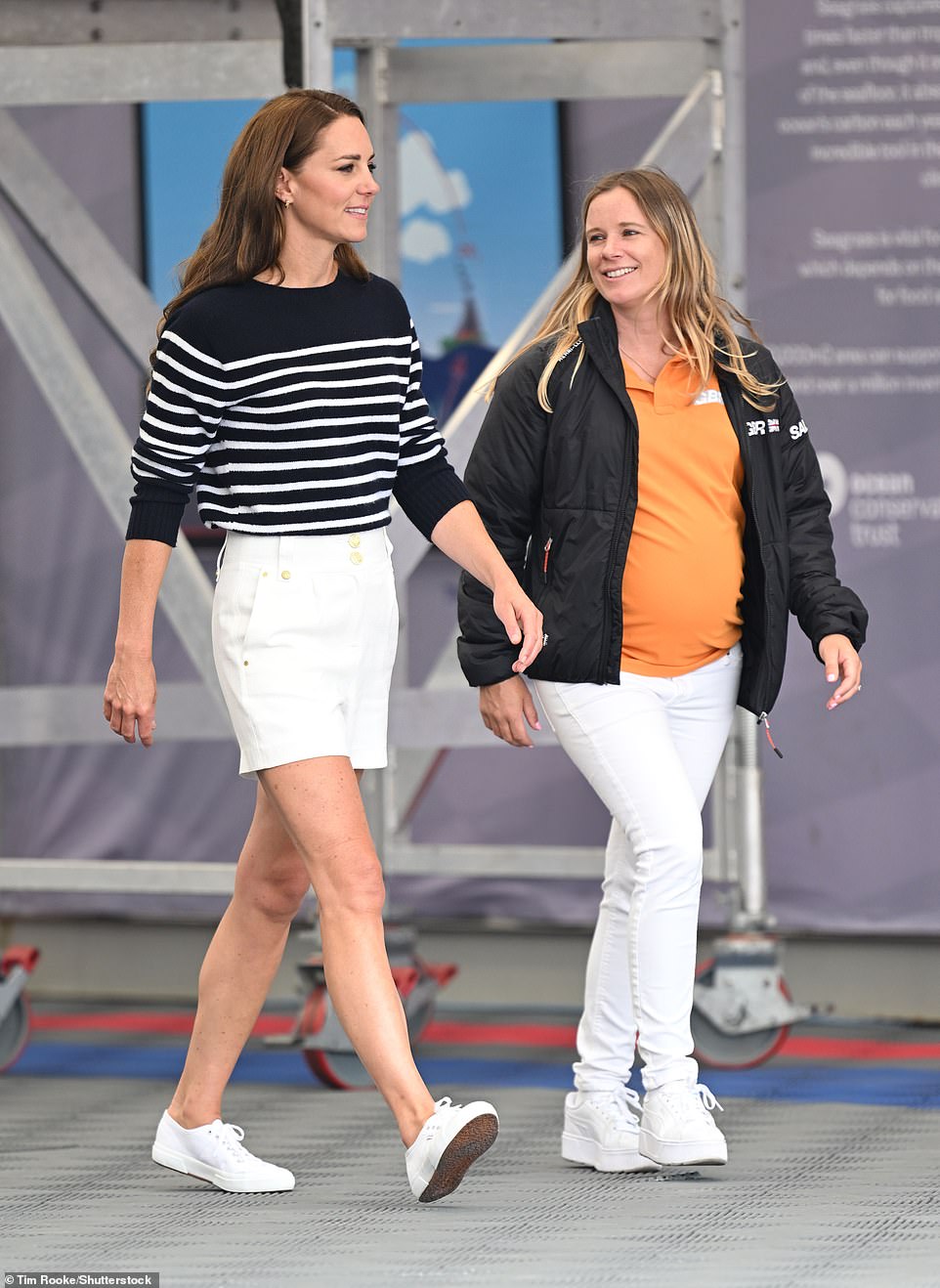 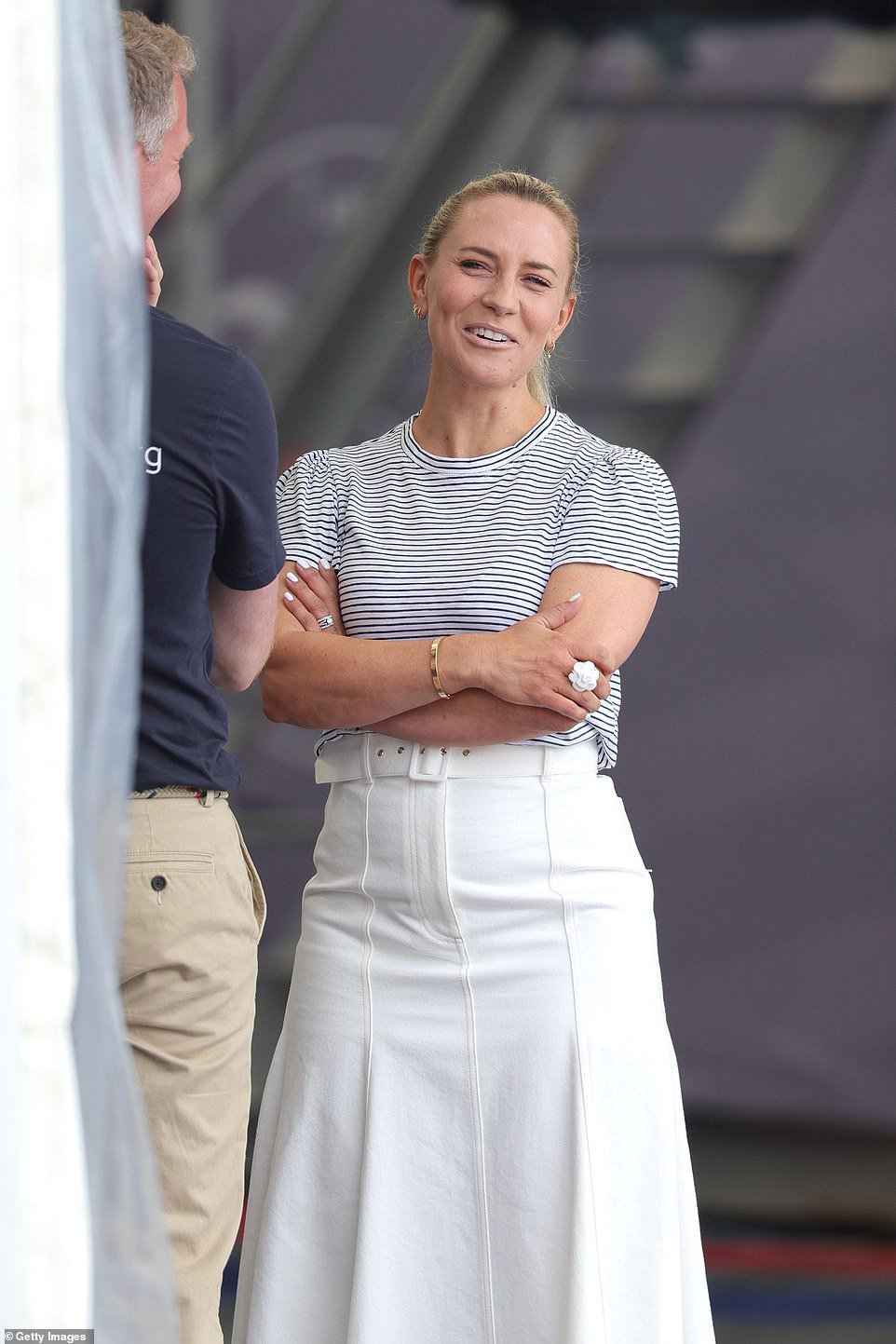 Sir Ben’s wife, sports presenter Georgie Thompson also donned nautical stripes to watch her husband team up with the Duchess for the race

Sir Ben Ainslie will be leading the Great Britain SailGP team in the short races, in which the catamarans can reach speeds of up to 55 miles per hour.

Although royal fans can expect to see Kate’s competitive side as she joins the team, her rivals kept in the spirit of the friendly race and gifted her with a gorgeous framed print before she took to the water.

The Duchess of Cambridge is Royal Patron of the 1851 Trust, the official charity of the Great Britain SailGP team.

The charity works with young people, using sport to inspire an interest in science and technology.

In recent years the charity has encouraged young people into climate action with its platform, Protect our Future.

The programme aims to protect oceans and the planet from the effects of climate change by teaching young people about climate science. 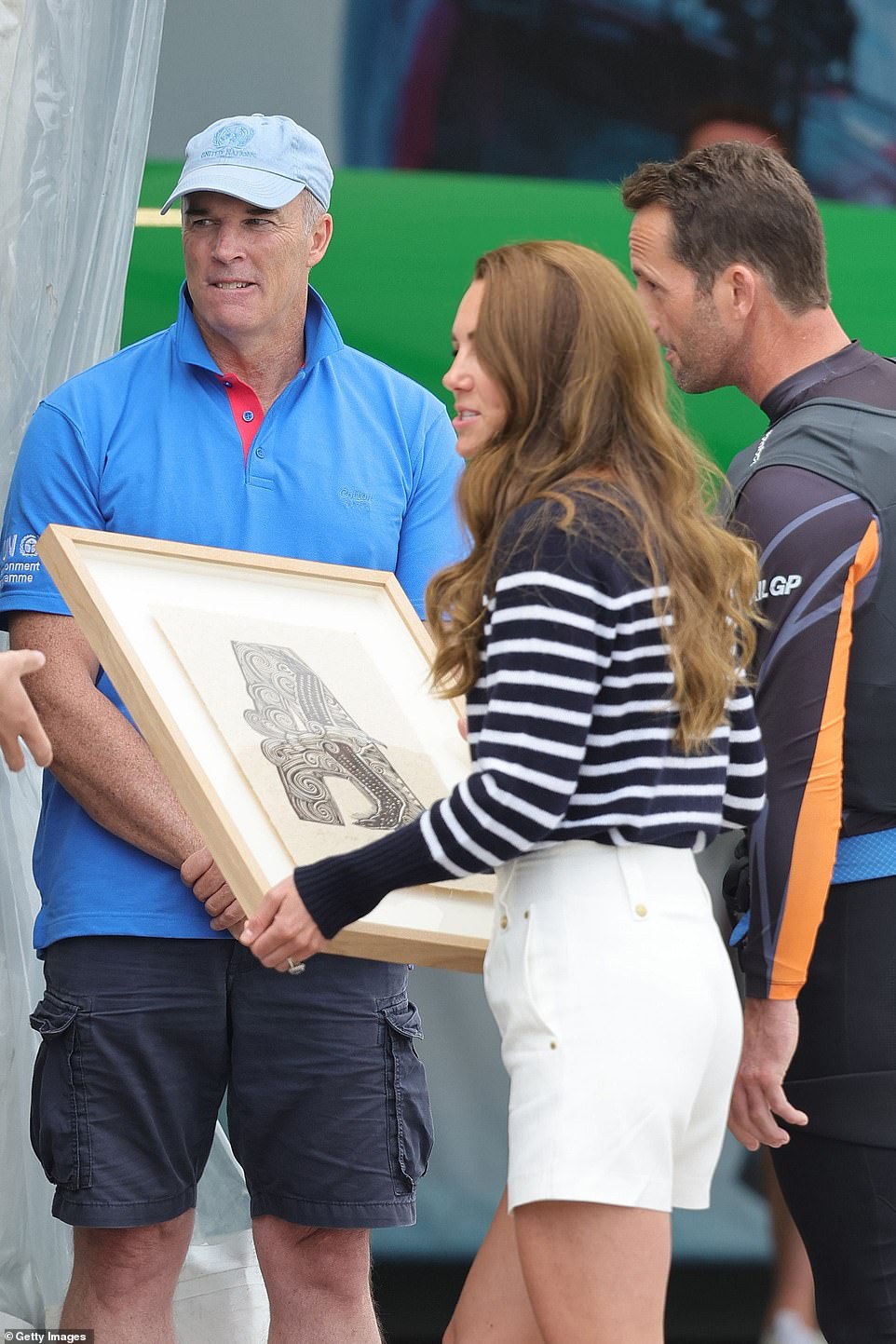 The Duchess was presented with a framed print by the New Zealand SailGP team during her visit to the 1851 Trust, of which she is Royal Patron 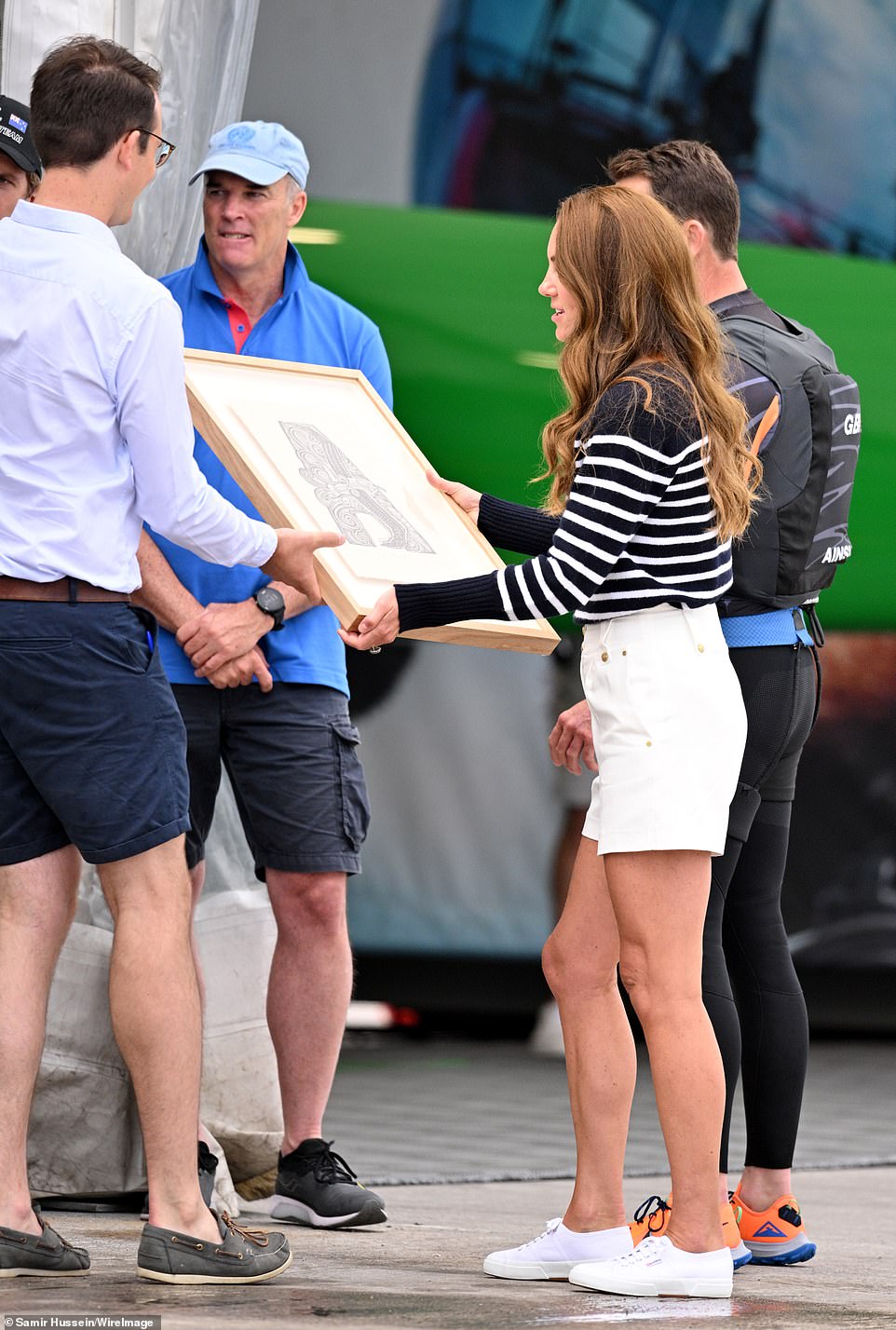 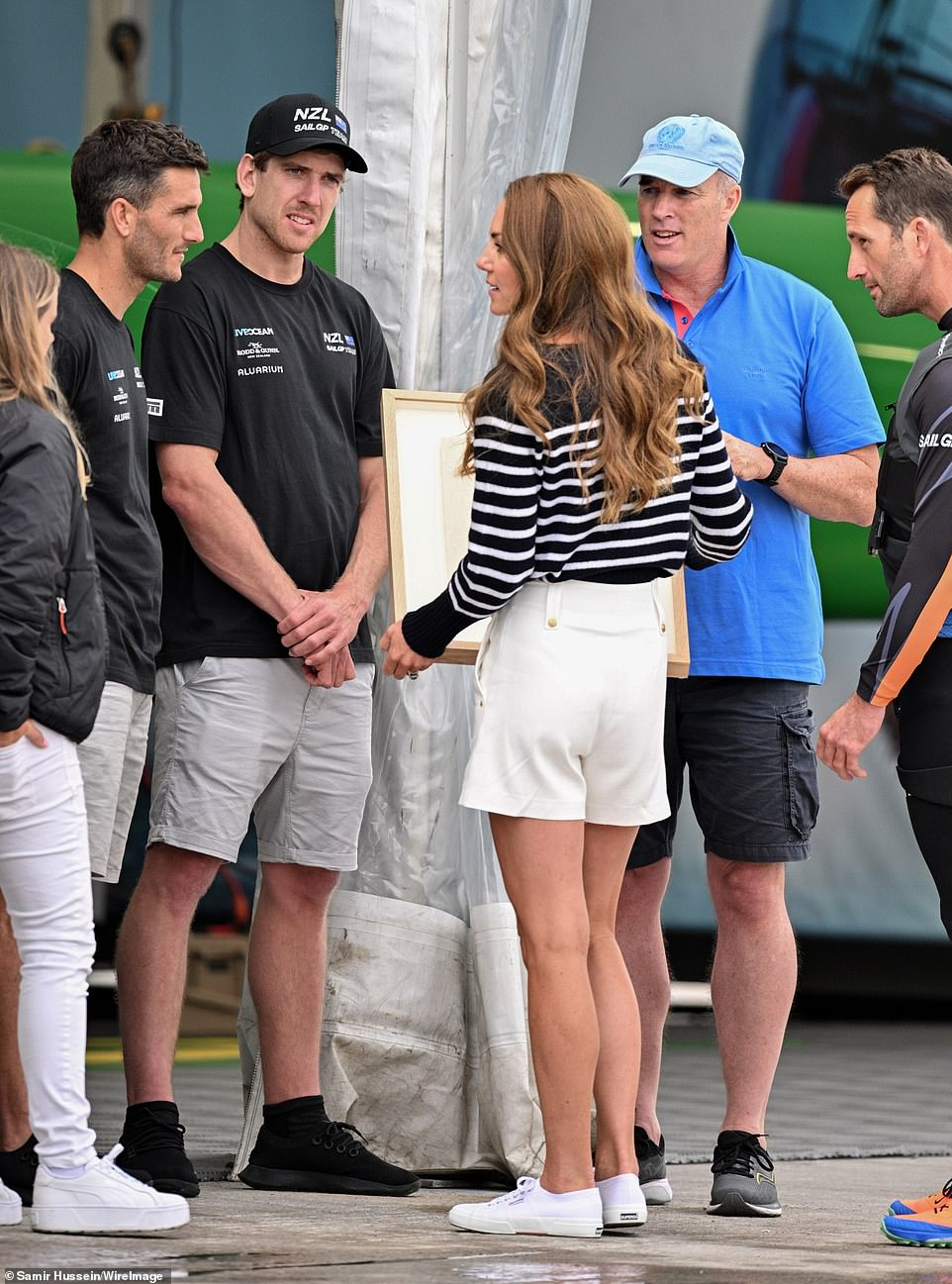 Kate chatted to her rivals, members of the New Zealand SailGP team, who had presented her with the framed gift 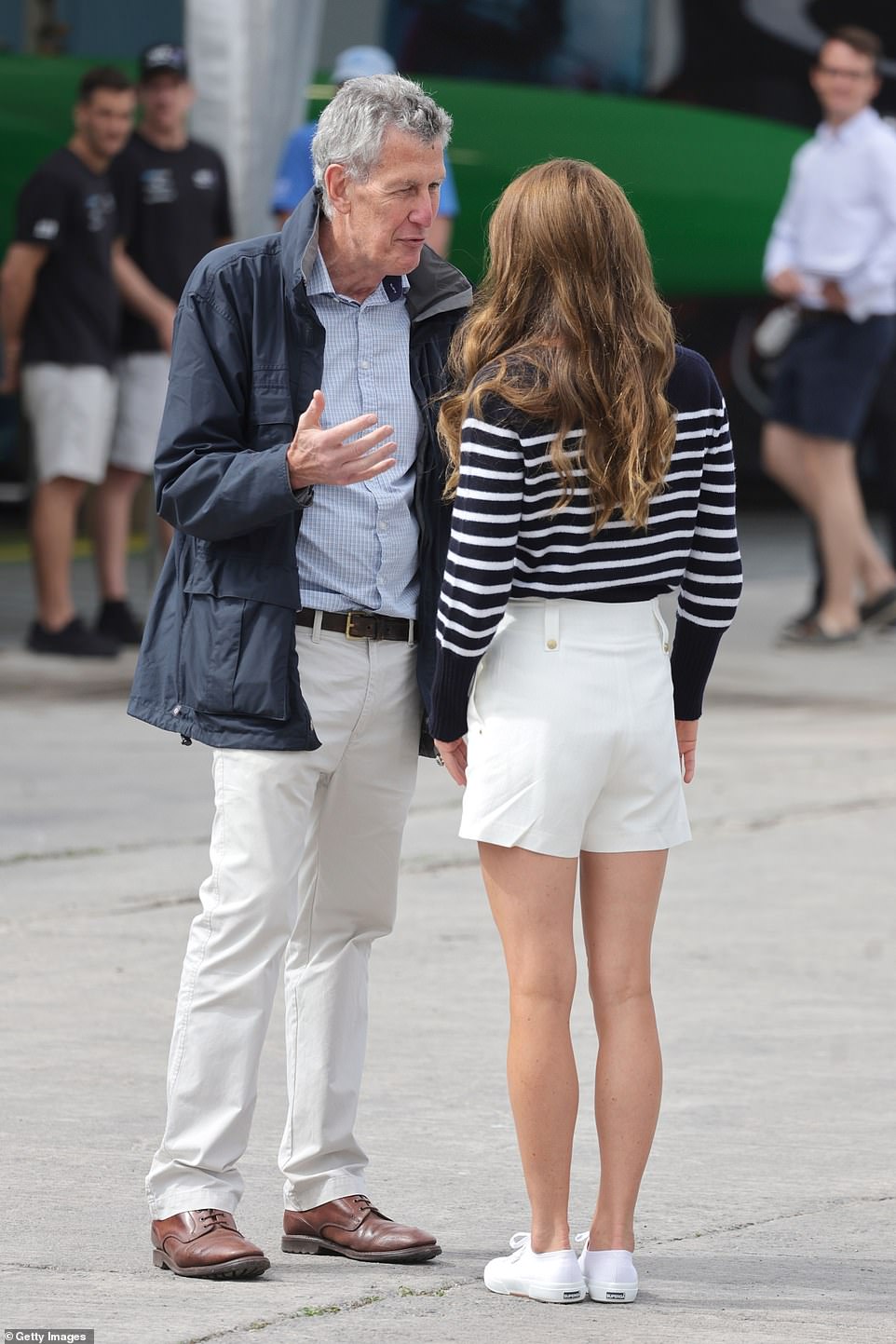 Kate spoke with a member of the charity, which uses sport to encourage children to develop an interest in science and technology

During their visit, Kate will be joining the Protect Our Future programme, learning about seagrass, one of the most important natural tools in countering damaging changes to our climate.

Later today, Kate will join the Great Britain SailGP team, in a race against the skilled New Zealand outfit helmed by Peter Burling in a friendly ‘Commonwealth Race’.

It will most likely be light work for the Duchess, who showed her competitive side when she rook part in a sailing regatta in The Bahamas at the end of her Royal Caribbean Tour with Prince William in March.

Posting a video of the race on Instagram, they wrote: ‘Taking to the sea yesterday for a very special regatta here in The Bahamas. Thank you to the crew for braving the rain! It was a close race… ‘

After an afternoon of fun Kate is likely to be making a swift exit and heading back to London as The Cambridges are expected to be attending the Euro 2022 final, which will see the England Women’s team take on Germany at Wembley Stadium.

FEMAIL earlier reported that Kate and William were considering taking Princess Charlotte, seven, along to the match.

An FA source said the football-mad Princess, who has been honing her goalkeeping skills, may join her parents to cheer on the Lionesses.