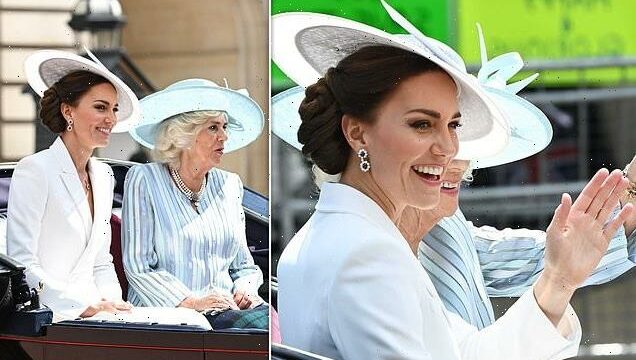 A bit of all white! Duchess of Cambridge dons £3,000 recycled Alexander McQueen dress paired with a Philip Treacy hat and Princess Diana’s earrings for Trooping The Colour

Kate Middleton stunned in a £3,000 Alexander McQueen blazer dress today as she joined her stepmother-in-law Camilla and her three children for a carriage ride down the Mall to celebrate the Platinum Jubilee.

The Duchess of Cambridge, 40, looked in great spirits as she smiled and waved at adoring crowds. Earlier she was seen riding in a car with Prince William, 39, who sported full military regalia.

While in the past up to 40 members of The Firm have been spotted on the Buckingham Palace balcony only working royals and their children will be joining the Queen to get the best view of the flyover today, meaning there will be no spot for Prince Andrew, Prince Harry and Meghan Markle.

Today, Kate opted for a £3,000 Alexander McQueen coat dress which she also sported last summer as she joined senior royals at the Eden Project for G7 reception.

Her Royal Highness is a huge fan of the British brand sporting designs on several occasions, most famously to her wedding in 2011.

She added a Philip Treacy hat to the ensemble and paid a sweet tribute to Princess Diana by wearing her late mother in law’s earrings. A bit of all white! Kate Middleton stunned in a £3,000 Alexander McQueen blazer dress today as she joined her stepmother-in-law Camilla and her three children for a carriage ride down the mall to celebrate the Platinum Jubilee The Duchess of Cambridge , 40, looked in great spirits as she smiled and waved at adoring crowds along stepmother-in-law Camilla and her three children, Prince George, Princess Charlotte and Prince Louis Ready to party! Today, Kate opted for a £3,000 Alexander McQueen coat dress which she also sported last summer as she joined senior royals at the Eden Project for G7 reception. 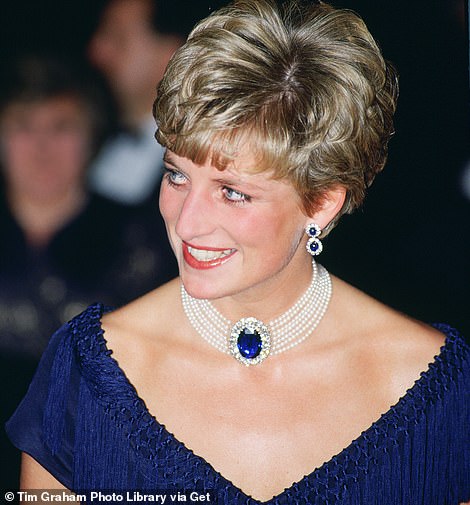 Kate tied her hair back into a sleek plaited bun and showed off her natural beauty with simple make-up look, pairing a light layer of foundation with smokey brown eye and pink lipstick.

Her accessories included a Philip Treacy hat – the favourite milliner of royal circles – and diamond and sapphire earrings from Princess Diana’s collection, believed to be a present from William before their wedding.

The late Princess of Wales visited Ottawa in 1983 alongside Prince Charles and sported the glistening jewels with a pearl choker.

The Duchess of Cambridge has previously sported the earrings but removed the top circular sapphires. Kate was first photographed in the elegant single-drop design in an official portrait at Clarence House on June 3, 2011.

This morning, Prince William and Kate today said they were ‘looking forward to celebrating’ the Queen’s Platinum Jubilee ahead their first official joint engagement together with Harry and Meghan in two years at Trooping the Colour.

The Duke and Duchess of Cambridge said in a tweet on their official account this morning: ‘We’re looking forward to celebrating and seeing how you’re joining us in marking this #PlatinumJubilee weekend.’

Today, Kate opted for a £3,000 Alexander McQueen coat dress which she also sported last summer as she joined senior royals at the Eden Project for G7 reception. 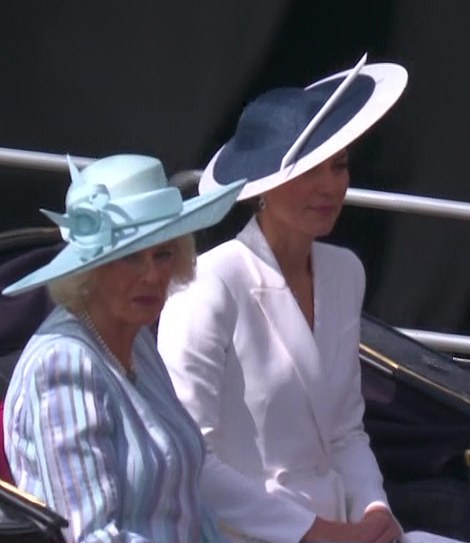 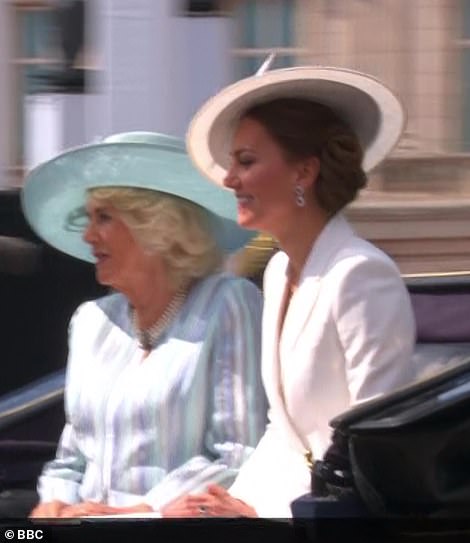 Future Queens unite! Stylish Kate paired a navy blue hat with the £3,000 Alexander McQueen dress as she rode down the mall with Camilla The Duchess of Cambridge , 40, looked in great spirits as she smiled and waved at adoring crowds while William sported full military regalia. 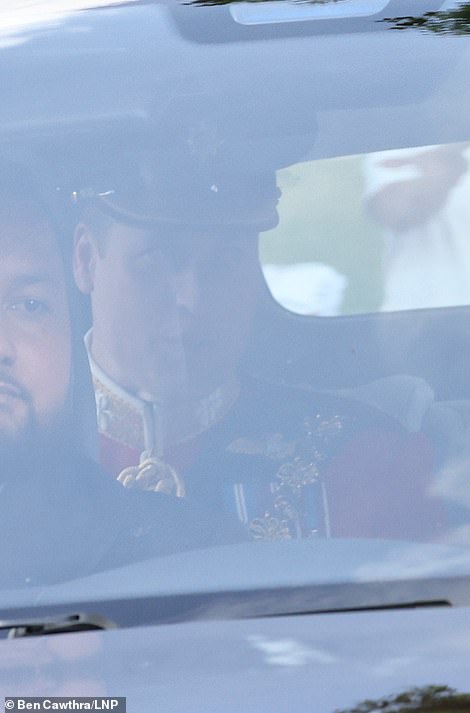 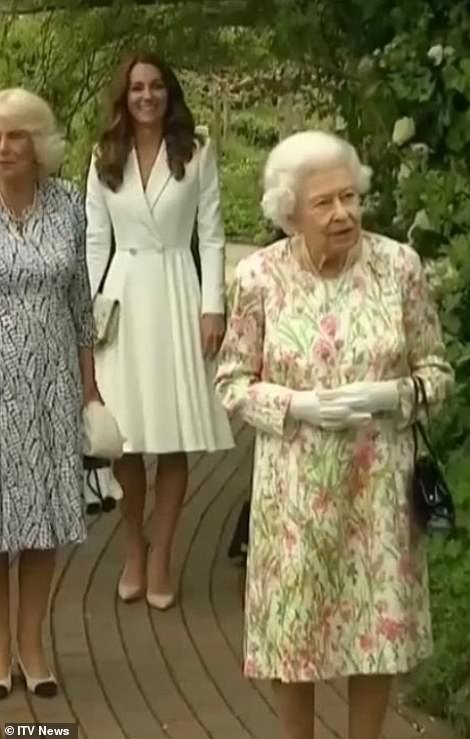 Today, Kate opted for a £3,000 Alexander McQueen coat dress which she also sported last summer as she joined senior royals at the Eden Project for G7 reception (pictured then)

They also replied to a tweet from the Irish Guards preparing writing ‘Hope today goes well, see you soon!’

It comes ahead of a gripping – and highly public – family reunion in front of a watching audience of millions, with the Duke and Duchess of Sussex expected to be there along three-year-old Archie and Lilibet, nearly one.

The children are likely to meet their cousins Prince George, Princess Charlotte and Prince Louis at long last. Lilibet has never been introduced to her royal relatives, while Archie has not been in the UK since he was six months old.

But there is no invitation for the shamed Duke of York even in a private capacity, showing just how far the Queen’s son has fallen from grace. The Queen’s Birthday Parade at Horse Guards in London is the first official Platinum Jubilee event of the bank holiday weekend, and the most widely attended by the Windsors.

The jubilee commemorations kick-start with the traditional Trooping the Colour military spectacle today, involving more than 1,500 officers and soldiers and 350 horses from the Household Division.

But the Queen’s attendance is only likely to be confirmed this morning, with royal fans hoping to see her appear on the balcony with her family for a special flypast, and possibly even review the troops.

It marks another high profile event for royal, with experts previously claiming Her Majesty, 96, is sees William, and Kate as ‘very much as the future’ and believes Charles will act as ‘interregnum’ with the ‘burden of monarchy’ falling on the Cambridges.

Speaking to OK! magazine last month, Princess Diana’s biographer Andrew Morton said: ‘The thing about Kate is the Queen was impressed she adored and loved William for himself, not for his title’.

‘She spends a lot more time supporting and nurturing the relationship between William and Catherine than she did with Charles and Diana. It’s pretty clear she wasn’t going to make that mistake again.’

Many members of the Firm have paid tribute to Her Majesty on the historic occasion, with Princess Eugenie  asking her Instagram followers to share photos and videos of celebrations to join together in paying tribute to The Queen’s life of service.

She has also paid a moving personal tribute to her ‘grannie’ the Queen.

Writing in The Spectator magazine, said she hoped her one-year-old son August would grow to have the Queen’s ‘patience, her calmness and her kindness while always being able to laugh at himself and keep a twinkle in his eye’. The Queen is the first British monarch in history to celebrate her Platinum Jubilee.

Many had thought Her Majesty’s appearance on the Buckingham Palace balcony for the traditional post-parade flypast would be the most keenly anticipated moment of the day. But it is likely all eyes will, in fact, be on the family reunion playing out 50 yards down the road instead.

The Duke and Duchess of Sussex have been invited by the Queen to join family members watching the spectacular military event from the Major General’s Office overlooking the Whitehall parade ground. The room – once used by the Duke of Wellington – spreads out over the entrance to Horse Guards. It is where dignitaries traditionally watch from if they are not involved in the parade proceedings.

The four-day Jubilee celebration kicks off with the lavish Queen’s Birthday Parade today. Here is the schedule:

Public can watch spectacle from The Mall – lined with 200 soldiers from the 1st Battalion Coldstream Guards – or on large screens in nearby St James’s Park, Princes Street Gardens in Edinburgh or Bute Park in Cardiff.

The group will not include the Queen, the Prince of Wales, the Duke of Cambridge or the Princess Royal. Her Majesty will remain at Buckingham Palace where she will take the returning cavalry’s salute from the balcony there.

Charles will be taking the salute as the Colour of the 1st Battalion Irish Guards is trooped and inspect the Troops of the Household Division on the monarch’s behalf. He will be joined by his elder son and sister, with all three on horseback.

The Duchess of Cornwall, the Duchess of Cambridge, the Earl and Countess of Wessex and many other royals will travel to Horse Guards Parade from the palace in carriages. They will then disembark and watch the rest of the event from the Major General’s Office alongside Harry and Meghan, who will arrive by car.

The large royal party will also include all grandchildren of the Queen and their spouses. As well as the Sussexes there will be Princess Beatrice and her husband Edo, Princess Eugenie and her husband Jack and Anne’s children, Peter Phillips and Zara Tindall, and their families.

Meghan will not have seen any of the family since she and her husband acrimoniously quit as working royals and moved to North America in early 2020, while the prince only saw them very briefly at the Duke of Edinburgh’s funeral last year.

The last public occasion the Sussexes attended together in the UK was the annual Commonwealth Day service at Westminster Abbey in March 2020 when the atmosphere could not have been more awkward. William and Kate virtually blanked Harry and Meghan that day, leaving Prince Edward and Sophie to try to keep the peace.

Fortunately William, who has been most deeply affected by his brother’s actions and has struggled to hide his hurt, will not be forced to greet the couple in public. And Kate proved to be an admirable peacemaker when she made a point of breaking the ice and speaking to Harry after the Duke of Edinburgh’s funeral.

Harry and Meghan are staying with their children at their Windsor home, Frogmore Cottage. They had always been expected to join the congregation for tomorrow’s service of thanksgiving for the Queen’s 70-year reign at St Paul’s Cathedral, but their participation with Trooping is seen as an additional olive branch from Her Majesty.

Millions across the country are taking to the streets for parties and national commemorations held in in her honour during the special extended bank holiday weekend.

The Queen, who at the age of 96 has mobility problems, returned to her Windsor Castle home with her dogs on Tuesday after a pre-Jubilee a break at Balmoral as she paces herself ahead of the four days of festivities.

Her flight back to London was forced to abort a landing when her 13-seater plane was caught in lightning storm. This evening, more than 3,000 beacons will be set ablaze across the UK and the Commonwealth in tribute to the Queen, with the principal Tree of Trees beacon illuminated outside the Palace.

There will be no ceremonial journey to the service of thanksgiving at St Paul’s Cathedral for the Queen on Friday June 3, and the monarch, if she attends, will use a different entrance rather than scaling the steep steps.

And the Queen’s planned visit to Epsom for the Derby on Saturday is off, with members of the royal family attending on her behalf.

Saturday is also the first birthday of the Duke and Duchess of Sussex’s daughter Lilibet, amid speculation the Queen will get to meet her namesake for the first time and possibly attend her christening when Harry and Meghan fly back for the Jubilee.

In the evening, the BBC’s Party at the Palace – set on three stages in front of Buckingham Palace – will entertain a live crowd of 22,000 people and a television audience of millions.

Charles and William are preparing to deliver public tributes at the concert to the Queen, who is due to be watching on television from Windsor.

On Sunday, millions will gather for patriotic street parties, picnics and barbecues, with more than 85,000 Big Jubilee Lunches being held across the UK.

The finale is the Jubilee Pageant through the streets of London, with a cast of 6,000 performers and close to 200 celebrities joining the carnival procession.

It is hoped the monarch will make a final appearance on the Buckingham Palace balcony to round off the weekend to see Ed Sheeran singing the national anthem with a choir made up of Britain’s ‘national treasures’.