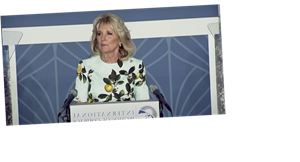 The first lady gave remarks on Monday during the State Department's International Women of Courage Award ceremony, paying tribute to the 21 women who have been recognized for their leadership.

"Some of these women have spent their lives fighting for their cause. Others are just starting out on a journey they didn't ask for," she said in her speech. "Some were called to service, and some couldn't escape it. They are fighting for their own lives and for their children. They want to right the wrongs of our past, to build a brighter future for everyone. They aren't immune to fear. No one is."

For her appearance, the FLOTUS wore a lemon-printed Oscar de la Renta midi dress, along with a matching protective face mask and a pair of yellow pumps. Just weeks ago, Meghan Markle also wore a shift version of the dress while appearing in a video with Prince Harry to discuss their podcast during Spotify's Stream On event. Is it any surprise that great minds think (sartorially) alike? "You see, courage isn't really found," Dr. Biden said during her speech. "It doesn't conjure away our doubts. It's an intentional decision made."

On Monday, the first lady also shared a quote from Maya Angelou on Twitter to mark International Women's Day, writing, "On this #InternationalWomensDay, we celebrate the resilience and courage of women everywhere," along with Angelou's famous words, "Each time a woman stands up for herself…she stands up for all women."