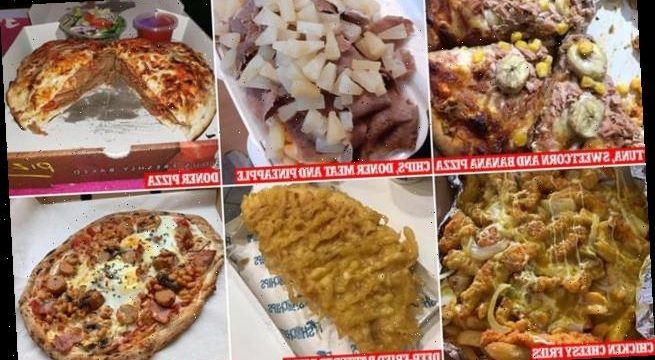 Frankenfoods! Social media users share snaps of their VERY bizarre takeaway creations – including a pizza topped with a Full English and a doner kebab calzone

Social media users have shared their utterly bizarre takeaway food concoctions, including a ‘breakizza’ and pizza topped with tuna, banana and pineapple.

Inventive British foodies shared their unusual creations to Twitter page Rate My Takeaway, where other food lovers were left completely horrified at the ‘abominations’.

The bizarre meal choices included a ‘breakizza’, which consisted of a full English breakfast piled on top of a pizza, and cheesy chips topped with doner meat and pineapple.

Elsewhere, one person ordered a doner meat calzone, which had layers of kebab meat inside the oven-baked folded pizza, and another ordered a deep-fried battered pizza.

Here, FEMAIL shares some of the bizarre takeaway food that people surprisingly ordered. 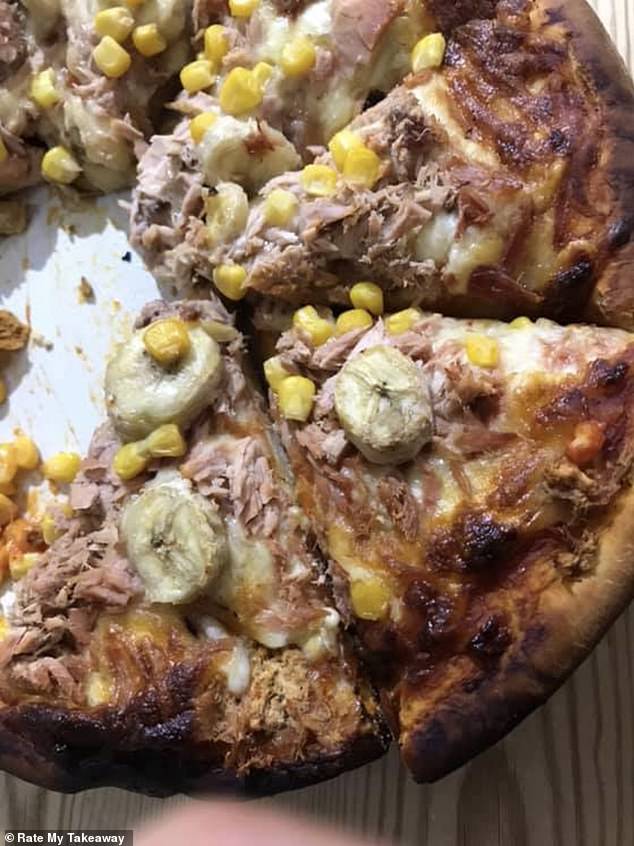 People have shared their bizarre food concoctions, including a banana, tuna and sweetcorn pizza, to Twitter page Rate My Takeaway where they were slammed as ‘vile’ by other users

One woman, known as Jules M, opted for some extremely unusual pizza toppings that were quickly deemed to be ‘disgusting’ and ‘vile’ by horrified Twitter users.

The snap showed her thick crust pizza, which was topped with tuna, banana and sweetcorn – flavours that are not traditionally mixed together.

People quickly shared their disgust at the food creation, which one person even went as far as suggesting was only good to be left ‘on the floor’.

One person commented: ‘I feel sick just looking at it, fish does not go on a pizza nor does banana. I somehow think you’re having cravings if some sort, if that’s the case May I suggest Mars bar sandwiches would be a better solution.’ 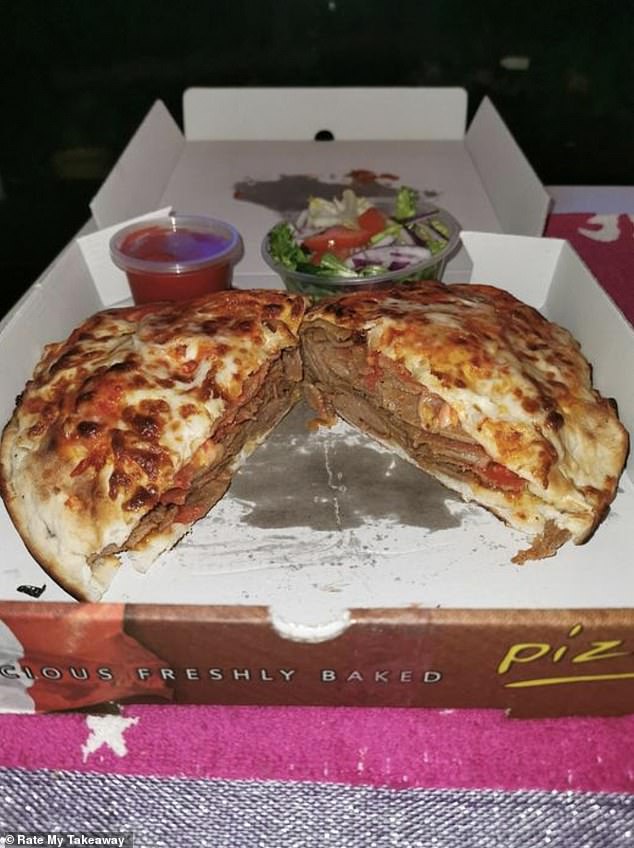 One brave user, Kevin M, shared his unusual doner meat calzone on the Twitter page, where it was deemed to be a ‘heart attack in a box’

One man called Kevin M revealed that he had ordered a doner meat calzone, which saw layers of kebab meat lying within an oven-baked folded pizza.

In the snap, the mammoth takeaway meal was also topped with cheese, and came with a small side salad and sauce.

One food lover hilariously quipped that they wouldn’t even eat the bizarre food creation if it was their ‘last meal’ while another said they would probably eat it while ‘hammered’.

One user wrote: ‘Thats a heart attack in a box However my opinion would change based on beer intake’ 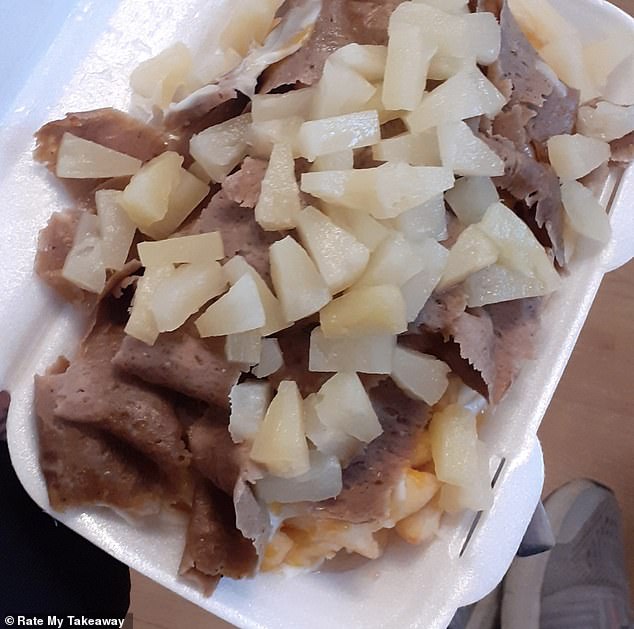 Everyone knows the age-old argument about whether it is acceptable to put pineapple on your pizza or not.

But this man, known as Ross C, took it one step further as he took a picture of his takeaway, where he had ordered pineapple with his cheesy chips and doner meat.

One Twitter user argued that the baffling creation had put them off ‘food for life’ while another said that the pineapple resembled ‘raw potato’.

Another disgusted person commented: ‘It could be improved by adding some kebab sauce and then being thrown into an incinerator.’ 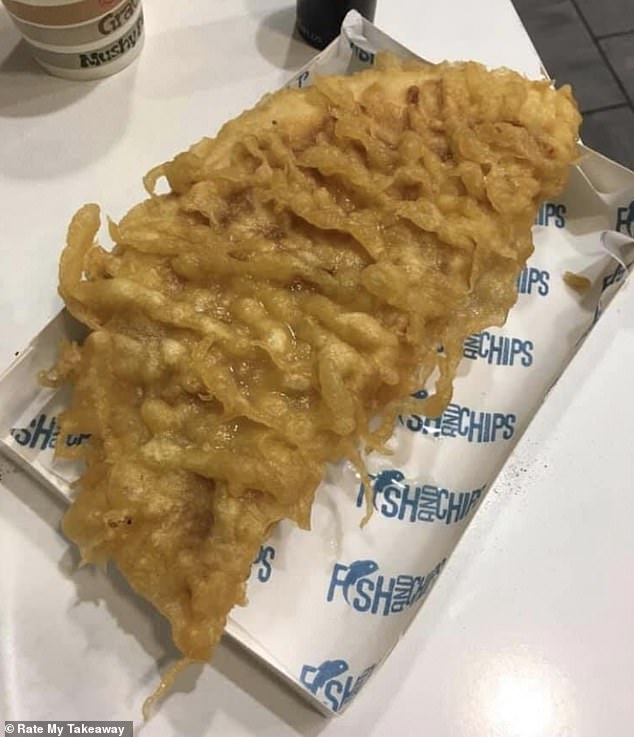 One woman, Jaz C, revealed they had ordered a pizza slice deep-fried and battered like a fillet of fish, with people slamming the takeaway as an ‘abomination’ and ‘rotten’

Jaz C left people ‘sickened’ after sharing their unusual choice of takeaway meal, which they got from a fish and chip shop.

The meal saw a pizza slice deep-fried and battered like a fillet of fish, with people slamming the takeaway as an ‘abomination’ and ‘rotten’.

But the dish divided opinion as others argued that it sounded ‘amazing’, saying the meal, also known as a ‘half pizza crunch’ was a classic dish for many Scottish people.

One person wrote: ‘Also known as a half pizza crunch , Quarter crunch on a roll with curry and a side of chips was the daily for many a Scottish high shcoolers.’

‘ANYTHING ON A PIZZA’ 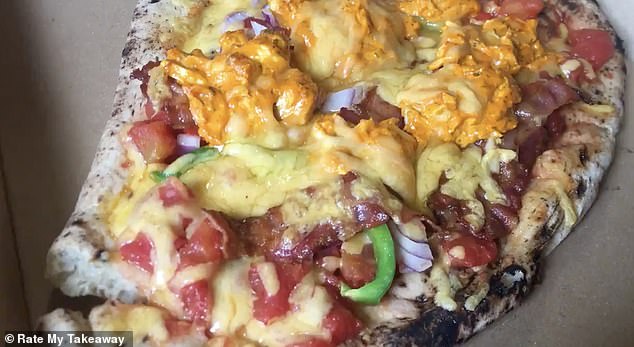 Another post saw one person brag that there was a cafe that lets you put ‘anything on a pizza’ while they showcased their heavily topped pizza base.

The user failed to specify what array of food was on top of their pizza, but it appeared to be loaded with onions, peppers, tomato, cheese and some sort of meat.

The seemingly ordinary pizza caused an uproar with other Twitter users, who argued that the food concoction resembled ‘cat sick’.

While another person fumed: ‘Take that pizza and throoooow it in the lake…’ 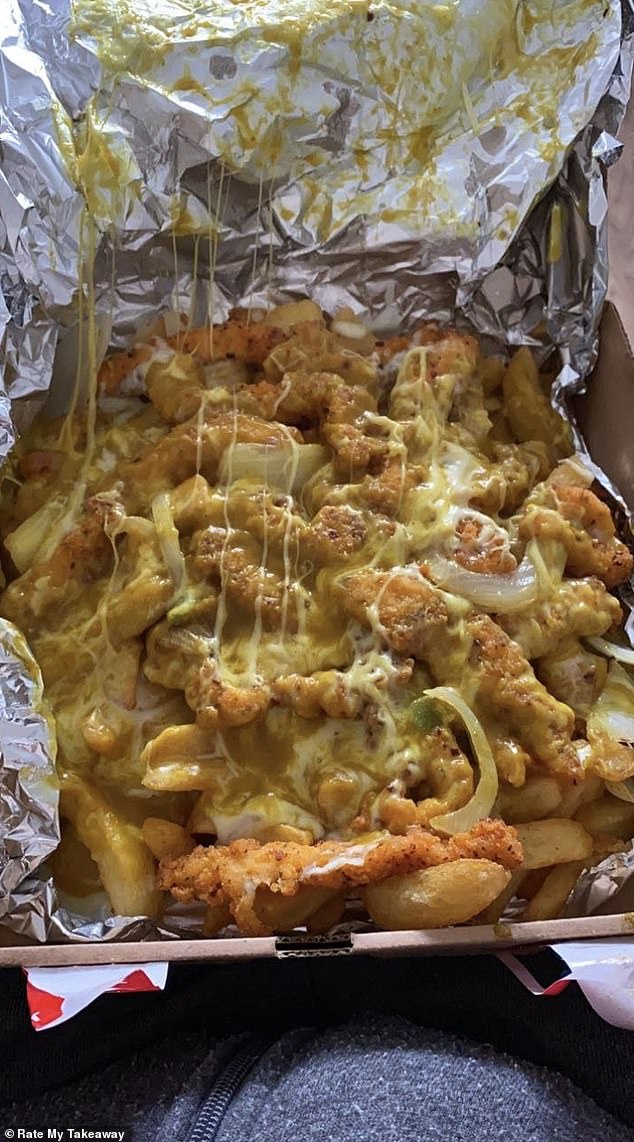 One food creation didn’t sound like an unusual idea in theory but a picture of the end result was slammed as looking like ‘vomit’ by unimpressed food lovers.

Kim M’s jam-packed salt and chilli chicken cheesy loaded fries were considered to be the recipe for a ‘heart attack’ by many disgusted Twitter users.

One person even went as far as saying: ‘Kim M If my mrs ever ordered that I would divorce her’

While others questioned why anyone would order the greasy concoction because it looked like someone had ‘s**t’ in a box.

Another penned: ‘My. God. Something you’d enjoy drop kicking across the street maybe.’ 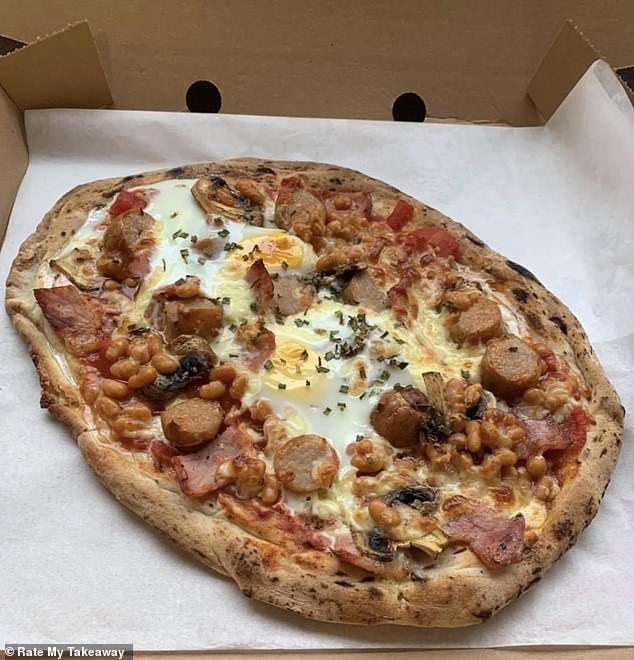 Danny M ordered what he termed a ‘breakizza’, which was a giant pizza with a full English breakfast, including beans, on top

Another bizarre takeaway creation saw one man, called Danny M, order what he termed a ‘breakizza’, which was a giant pizza with a full English breakfast on top.

In the snap, the pizza was heavily loaded with slices of sausage, beans, bacon mushrooms and an egg to recreate the breakfast food on top of a pizza.

Although full English breakfasts are commonly served with toast, people were completely horrified by this oven-baked pizza version of the meal arguing that beans do not belong on a pizza.

One disgusted person commented: ‘Get in the Bin!!!! Beans on a pizza?’

But another disagreed and said it sounded good, writing: ‘Chippy near me does a breakfast pizza with black pudding on it. Seriously good.’ 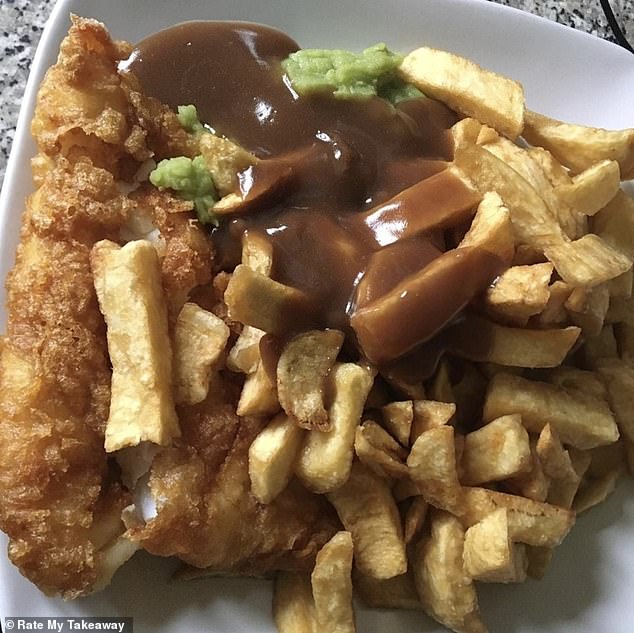 One person left people horrified after revealing that they put gravy on battered fish, sparking a new ‘chips and gravy’ argument in the comments

Chips and gravy is a common phenomenon, particularly in the north of England, but one person went a step further and combined it with battered fish and mushy peas.

People flocked to the comments to insist that gravy on chips was perfectly acceptable, but it was bizarre to have gravy with fish and mushy peas as well.

One person said: ‘Gravy on chips is cool but gravy must not touch the batter or the fish’

While another fumed: ‘That’s absolutely boggin. Gravy doesn’t belong anywhere near a bit of fish.

‘Have it on your chips as a stand-alone dish if you’re so inclined but a fish supper from a chippy deserves to be doused in salt & vinegar & enjoyed like that. 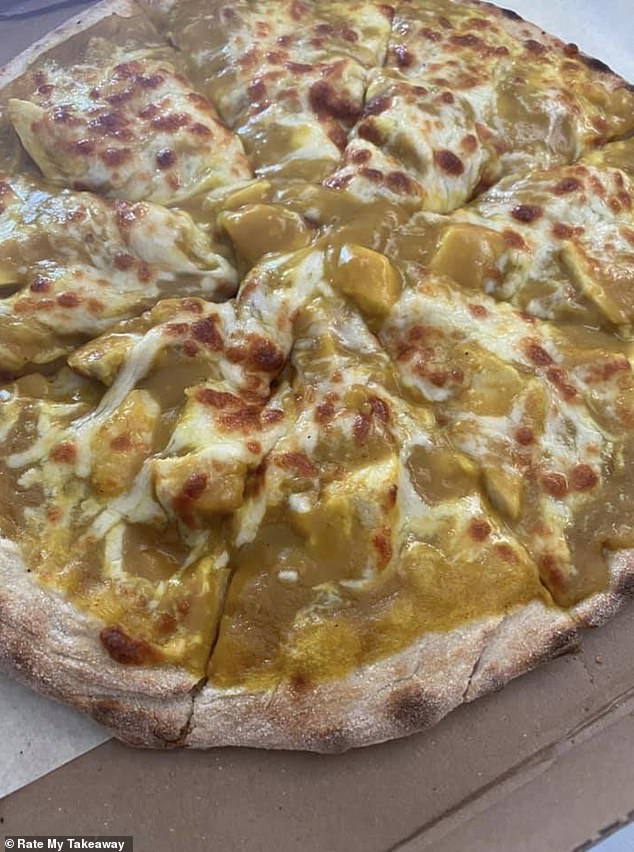 In the snap, the pizza was still topped with cheese as well as oozing with curry sauce and chicken, creating a rather unique pizza.

One person slammed the invention as ‘sicko’ while another described it as ‘vile’ and like ‘sick on a pizza’.

Another person insisted that ‘anyone who wants to eat this has no morals’.

THE ALL MUSHROOM PIZZA 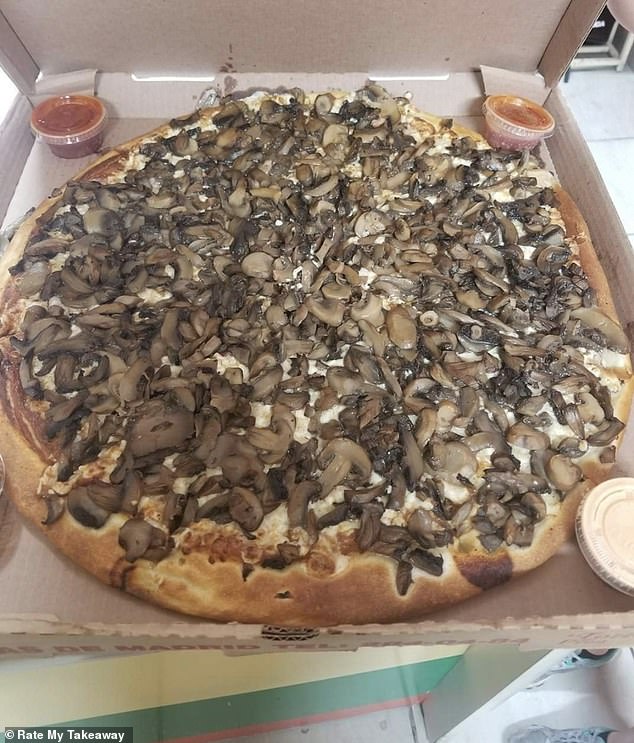 Richard B went slightly overboard when ordering mushrooms on his pizza, with one shocked person saying the takeaway dish resembled ‘maggots’

Mushrooms on a pizza is not an unusual topping, but one person went completely wild with the quantity of mushrooms they desired.

Richard B shared a snap of his takeaway pizza, which saw the entire base completely covered in mushrooms, leaving hardly any room to even see the cheese below it.

Other Twitter users insisted that the mushrooms definitely didn’t appear to be fresh and were likely straight out of a ‘tin’.

One person joked: ‘There’s not mushroom for anything else on it’

While another wrote: ‘WTAF last time a saw an image like, that I had just ordered a pint of maggots to go fishing with’ 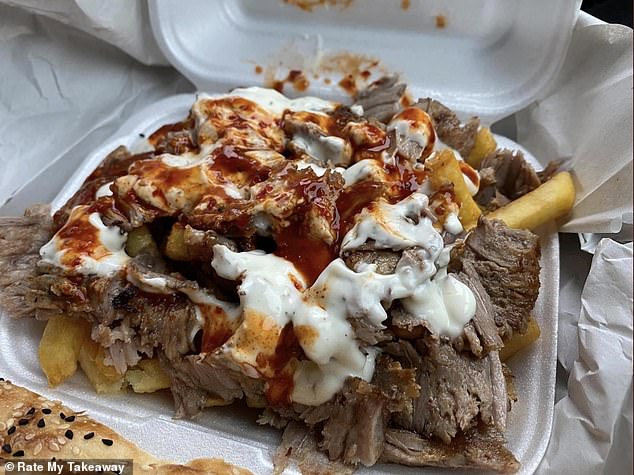 One takeaway dish, made up of lamb shawarma, chips, garlic mayonnaise and chilli sauce, left people questioning whether the greasy dish would look any different ‘after digestion’

While lamb shawarma with chips, garlic mayonnaise and chilli sauce might not seem like a bizarre choice, the end product left people disgusted.

The dish, shared by Mohamad A, left people questioning whether the greasy dish would look any different ‘after digestion’, while another said they would only eat it after ‘a pint or ten’.

One horrified person said: ‘Is that before or after digestion….’

While another quipped: ‘Is there a Nightingale hospital near you?’

SLICES OF CHEESE ON CHIPS – NOT GRATED 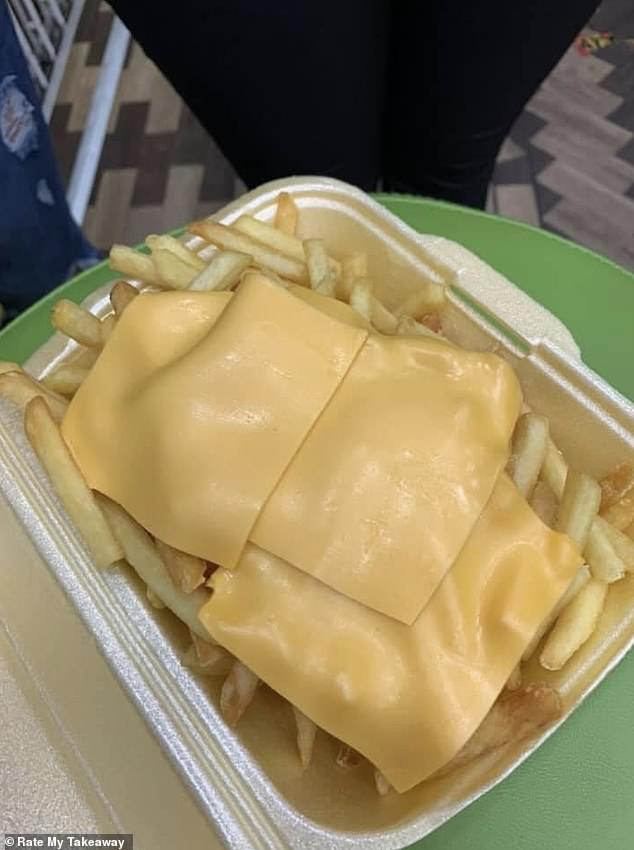 Sam P’s cheesy takeaway chips were deemed to be an ‘abomination’ after the eatery had put entire slices of burger-style cheese on the chips.

Food lovers quickly said that the cheese should have been grated and melted on top of the chips and were horrified that someone had ‘paid for that s**t’.

Alongside the post, one person penned: ‘Someone paid money for these? Actual money?’

While another commented: ‘It’s that fake s**t as well!’