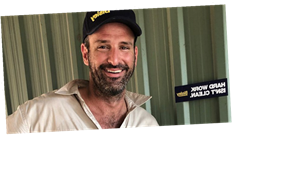 Married At First Sight Australia has been all the rage in the UK, three years after it first aired Down Under.

The hit show that sees strangers, who have never met, take their vows to varying degrees of romantic success has been saving us all from boredom as the lockdown continues.

But since 2018 a lot changed in the cast members' lives after donning their wedding attire.

One such star whose life has changed a lot since the hit show is Mick Gould.

The farmer 'married' blonde bombshell Jessika Power, who left him to embark on an affair with fellow contestant Dan Webb.

Despite not finding love on the show, things are definitely looking up for the star. Let's see what he is up to now…

Who is Mick Gould dating?

The brunette 26-year-old appeared on The Batchelor during 2018, in a bid to win over Nick Cummins.

However, Mick met Kayla at an event back in March 2019, and they have now moved in together to his farm in Gympie, Queensland.

Are you part of The OK! VIP Club? If not, why not? It’s free and gives you backstage access to stories like this, exclusive home tours, special discounts and so much more!

On Valentine's Day Kayla wrote a sweet Instagram post for her boyfriend, writing: “Happy Valentine’s Day @mick_gould86 thanks for vacuuming the floors for me this morning.”

In an interview with New Idea, Mick revealed that it was love at first sight for him and Kayla.

The duo are now planning to have a family and get married.

He explained: "I didn't think going to an event with a bunch of reality rejects would be where I met my soulmate."

What does Mick Gould do as a job?

Mick still works as a farmer, on his farm in Gympie, Queensland.

He frequently posts snaps of him and Kayla enjoying farm life.

Most recently he shared an adorable snap of lots of baby piglets, captioning it: "Mick and @kaylagray1petting zoo in full swing! little bacons seeds everywhere!"

He also has sheep, cows and goats.

However, by the time Kayla set foot in the place it had been restyled on the TV show A Current Affair.

She added bedside tables, moved the bed around and covered it with gorgeous throws and cushions.

She even added houseplants… Who ever said famers can't be chic?!