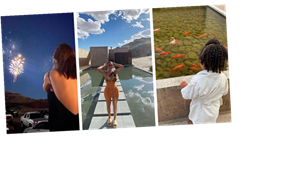 Keeping Up With The Kardashians star Kylie Jenner is currently enjoying a lavish holiday in Utah.

The youngest of the reality TV dynasty, who was recently stripped of 'world's youngest self-made billionaire’ title, is staying at the five star Amangiri resort in Canyon Point.

Rooms at the architecturally stunning hotel start at £2,615 and can reach whopping highs of £5,070 per night, but that is still somewhat affordable by the make-up mogul’s standard.

The location is absolutely breathtaking owing to minimalist and modern design which enhances, rather than detracts, from the dramatic landscape.

The hotel is situated by a body of water, which is just as well as the temperature is set to hit highs of 37 degrees this week.

Aside from its obvious appeal, why it was likely chosen by the mega-star is because it is very hidden which makes it attractive for someone used to a lot of media scrutiny.

The 22 year old is enjoying her break alongside a group of friends, as well as her two-year-old daughter Stormi.

Older sister Kendall, 24, also visited for a few days but is now back in LA.

But what have Kylie and her group got up to on their trip away?

Well, firstly Kylie has, of course, been posing up a storm. One particular snap that sent fans wild was one she took in front of a day bed, which had the caption “only thing missing is you”.

The suggestive caption could possibly be a hinting at the rumoured reunion with Stormi’s father, musician Travis Scott.

Many of Kylie’s 184 million followers were quick to tag the rapper, just in case he might have missed it.

But aside from photoshoots, it seems the group have also been rather active taking a ride on a speed boat out on a lake, as well as visiting The Grand Canyon and hiking the surrounding area.

Kylie and her friends even bravely crossed a suspension bridge above the canyon which, for anyone that is scared of heights, would be not at all in the holiday spirit.

The group also headed out into the desert for a night to watch the fireworks, in an idyllic spot where lots of other holiday makers had driven up to watch – a socially distant drive-in show.

We are not in the least bit jealous…