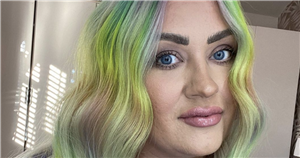 Gogglebox star Ellie warner has started renovations on her very impressive new home in Leeds with her boyfriend Nat.

The television star, 28, has created a home Instagram account to show off the new abode and the interior journey, and she’s already amassed a whopping 44,000 followers.

Ellie shared a snap of the chimney at her 1930s semi-detached abode and revealed how Nat was "hard at work" in the kitchen.

The star also posted a before and after of the chimney after Nat had chipped away at the pattered wallpaper to reveal gorgeous exposed brick.

She penned: "And so the work begins!! Nat hard at work in the kitchen chipping the plaster off the chimney breast and exposing the brick beneath!

"Still don’t have a clue what else I’m gonna do in here but I just knew I had to get this out of the way first as it’s such a messy job! I’ve got dust in places I never knew dust could reach."

The Channel 4 beauty has also revealed that she has chosen a colour palette of grey, cream and orange for the all-important living area which could be the new backdrop for her appearance Gogglebox.

She wrote: "I’m gonna go for mid century vibes in the living room and it’s the only room that I currently have any ideas for. The living room is the first job on my list then everything size can come later, I’m just gonna try focus on one room at a time so I don’t end up doing half a job."

Other updates include a stunning table which Ellie has positioned in front of the exposed brick, in front of gorgeous sage walls.

"And we have a table," the Gogglebox star penned, adding: "still living out of boxes and the decorating is a working progress but at least we can sit down and eat and not on our laps."

Ellie also shared a peek at the living room, revealing some very vibrant wallpaper and some popping orange radiators.

She added: "The radiators, the paper, the blue I’m just living for it all everyone thought I was mad when I said I was getting bright orange radiators but how effing cool are they?!?!"

It comes after Ellie shared a photo of her huge new house and, clearly excited, she penned at the time: “Soon to be our home. Thank you to everyone who’s followed so far!! We’re looking at exchanging end of May/June time all being well.

“We’re so lucky the current owners have kept it in immaculate condition so we can move straight in and just do things as we go along! I’m so excited that I’ve more or less kitted the living room out already as that’s gonna be the first room on the list.

“Nat has banned me from looking on Facebook market place but can’t wait to get in and start making this house our home.”

The post was like by just shy of 9,000 people and you can see the home in clear view in the snap; a semi-detached abode with a front garden.

The home seems to have an extension on the roof too, making it appear like a three-storey house, and there’s plenty of garden space too.

Showing off the back of the home, Ellie wrote: “Thank you to everyone who’s followed!! This is the view from the back garden! I can’t wait to be sat on that patio in the sunshine with a nice cold beveragino!

“@mickmadgeandmorris are gonna love playing in the garden and brucey bonus it’s already doggy secure as the current owners have small dogs too!

“The dorma room is the master bedroom with en suite and hopefully one day when we’ve saved enough pennies we can extend out the back, bifold doors, velux windows you know the drill!”

“That’s gonna be a lonnnng way off yet and we’re lucky there’s plenty of space downstairs!

“I’m gonna hold off posting any interior pics for the minute to respect the privacy of the current owners but I’ll share some pictures of bits that I’ve been buying and possibly some mood boards if I work out how to make one on my phone.”

The garden is huge and very spacious with a lovely seating area which looks perfect to enjoy during the sunnier climes.

The 28 year old star, who features on the TV show with her sister Izzi, put her hairdressing skills to good use in March when she gave herself a vibrant pink makeover and showed off the results on her Instagram page.

Sharing an amazing before-and-after video with her 206K followers, the star can be seen transforming her bleach-blonde locks to a bold pink ombré style.

The Gogglebox star runs her own hairdressing business in Leeds, but she’s now turned her attention to her own mane and is giving us serious hair envy.

Ellie’s fans also appear impressed with the transformation, flocking to the comment section to praise the star on her bold lockdown look.

For more Gogglebox and home updates, sign up to OK!'s daily newsletter here