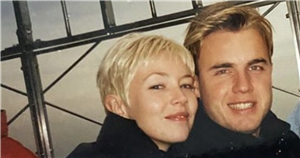 Gary Barlow has shared a gushing tribute to his wife Dawn as the couple celebrated 22 years of marriage.

The Take That singer, 50, who previously revealed that he and Dawn, 52, came 'close to divorce' after a Star Wars faux pas, shared a sweet snap of the pair alongside a series of throwback pictures with his 847,000 Instagram followers.

Gary shared a recent photograph of himself raising a glass with Dawn alongside snaps of the couple at a photoshoot in his Take That days, captioned: "Happy 22nd Wedding Anniversary Mrs.B Well what a time we’ve had. So many adventures. 4 beautiful children.

But what do we know about their relationship? Let's take a look…

How did Dawn and Gary meet?

Take That frontman Gary first met Dawn Andrews, from Worcester, in 1988 when she was hired as a backing dancer in a music video.

The pair met again in 1992 at the Children's Royal Variety Performance before Dawn accompanied Take That on their 1995 Nobody Else tour after she was chosen by Jason Orange. The couple made their first public appearance at the 1996 BRIT Awards.

When did they get married?

Dawn and Gary tied the knot on January 12 2000 in an intimate gathering on the Caribbean island of Nevis.

Meanwhile the songwriter has previously revealed that he would like to renew their vows.

Speaking in 2017 about his plans for the following year during a Q and A for ITV’s An Evening With Take That, Gary said: "I’d like to renew my wedding vows with my amazing wife. That’s ­definitely on the agenda."

The couple's fourth child, Poppy, was stillborn in August 2012.

In a statement, the couple said: "Dawn and I are devastated to announce that we've lost our baby. "Our focus now is giving [Poppy] a beautiful funeral and loving our three children with all our hearts."

Taking to Instagram to pay tribute to their late daughter in 2020, Gary wrote: "Thank you for all your kind messages yesterday – we soldier on."