Several Infrastructure Australia board members have agreed to step down ahead of an independent review ordered by the new federal government over concerns the agency has become overly partisan and lost direction.

Infrastructure Minister Catherine King on Friday said the review was essential to restoring confidence in the organisation that vets and ranks major projects ranging from roads to dams. 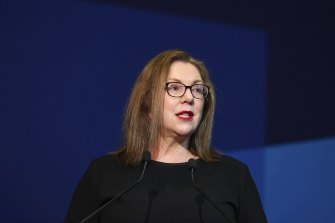 The terms of reference of the three-month review make clear the government wants to target the agency’s board, including its members and their experience.

“In recent years, the organisation has been allowed to drift with partisan board appointments and a lack of clear direction,” King said in a statement.

“It’s clear a review has been necessary and that’s why Labor committed to one before the election.

“I thank the board members, some of whom have agreed to step down, for their understanding and contribution as the government reviews and refreshes Infrastructure Australia,” she said.

A report this week by the independent Grattan Institute into government board appointments found at least two members of the Infrastructure Australia board had links to the Coalition. There were none with links to Labor.

Infrastructure Australia was created in 2008 by the then-infrastructure minister Anthony Albanese to deliver independent advice to the government on major projects.

In November last year, Labor raised concerns about the agency after former deputy prime minister Barnaby Joyce ordered an overhaul of its board to adopt a more regional and rural focus.

Col Murray, who had admitted to being a “fairly solid Barnaby supporter” and was a former mayor from Joyce’s New England electorate, was soon after made chairman.

Labor criticised the appointment at the time, and recently said the government had made its concerns about the board well known.

Announcing the review this week, King said it would examine the organisation’s role as an independent adviser on nationally significant projects.

The review will make recommendations on any reforms needed to ensure Infrastructure Australia is functioning and whether any legislation needs to be altered. The review will also look at the board’s governance, including its size and responsibilities, and the skills, experience and expertise of its members.

Infrastructure Australia chief executive Romilly Madew announced she would be leaving the organisation in July for a job heading Engineers Australia. It’s unclear which board members have agreed to step down ahead of the review.

It is the second review of a key policy institution ordered by the new government this week. On Wednesday, Treasurer Jim Chalmers revealed the terms of reference for his independent review of the Reserve Bank.