She has been a committed Buddhist for about 14 years, but on some days Meshel Laurie is still trying to find her zen.

“Every Buddhist probably thinks they’re a bad Buddhist,” she says. “But the reason I call it that is because people always accuse me of being a bad Buddhist, like most recently on the weekend just gone.” 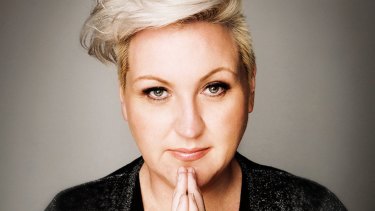 Buddhist Meshel Laurie has had a few bumps on the path to enlightenment.

That “weekend just gone” was the one with the federal election, where a strongly worded tweet about the result led to the comedian, podcaster and author being inundated with replies varying from “you’re supposed to be a 45-year-old Buddhist, but you’re acting like a spoilt teenager” to “#loser” with quite a few more unprintable ones in between.

“On social media, people always accuse me of being a bad Buddhist if I say something they don’t like, and it just makes me laugh when people go, ‘Well that’s not very Buddhist,’” she says.

“And I think, ‘Oh, OK, you’re a Buddhist scholar then, are you? Great.’ And I never profess to be a great Buddhist, I’m just trying really hard. I’m well aware that most of the time I’m failing, terribly.”

Laurie is bringing her Buddhist insights – bad and otherwise – to the Vivid festival as part of its After Hours program, where she will be in conversation with writer Benjamin Law about her path to enlightenment.

That path, however, has not always been smooth. Far from it. It was a “terrible depression” in her early 30s that led Laurie to the door of a Buddhist centre in Brisbane where she ended up doing a beginners course.

“The first course I went to was about destructive emotions and I thought, ‘Yep that’s me,’” she recalls.

“And it was all about – and I still struggle with it clearly – how following your first impulse is an emotional response that just causes more problems for yourself.

“And I did it [emotionally responded] again three days ago after the election result and it has caused more problems for myself, so it’s definitely something I still struggle with.”

The one thing she doesn’t struggle with, however – and it was one of the first Buddhist teachings she put into practice – is letting other people go first.

“It made me realise how often I tried to push my way into things first – through doorways, into train carriages, into traffic, into lines,” she says. “It was a funny little experiment to realise my impulse to try and get things first and be first.

“So to start a habit of stepping back – and offering that to other people first – was an interesting experiment. And that in itself becomes an exercise every day in humility and generosity. That’s a good one to start.”

Hang on – don’t you know that life is a competition and we shouldn’t let anyone, under circumstance, in front of us in traffic?

“Just try it. If you’re not in a hurry, why not,” she says. “Just being honest with yourself about not being in a hurry somedays is pretty liberating.

"Just say to yourself, ‘What’s the hurry? That’s fine, I don’t really need to be anywhere today, just jump in.’ We’ll still get there.”

Meshel Laurie is appearing at Vivid After Hours: Spirituality and Inner Life at the Art Gallery of NSW on May 29.