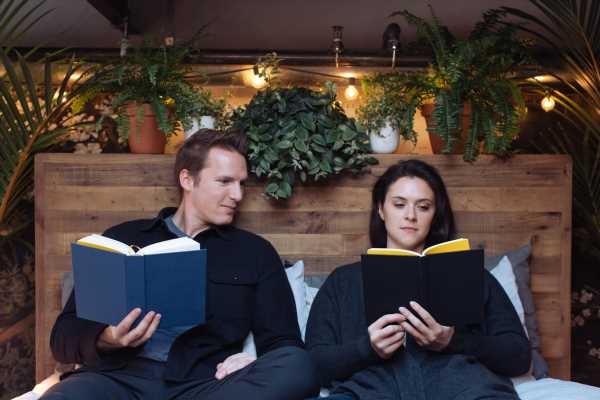 When I was in college, I dated a grad student. Our first few months were hot and heavy (well, he was a physics Ph.D. student, so our first few months were… months). But he’d cook for me, drive me places, text me all the time. After the first few months, he was noticeably pulling away by doing none of those things. In fact, I’d go days without hearing from him. I say it was “noticeable” because I noticed it in retrospect, not at the time. It can be hard to know if a relationship is on its last leg, so I collected some signs that might help you figure out where your relationship stands.

These are just warning signs that could indicate a relationship is on its last legs. Every relationship is different, and only you know what’s normal for yours. For instance, I’ve been in relationships with people who make an active choice to use their phones less (how? Why? On what planet?), but it did help me understand when they texted less. I didn’t have to interpret that as a sign that the relationship was winding down, although in other cases, it could be. If you’re interested in keeping your relationship alive and you worry that you identify with too many of these signs, don’t worry! These are just warnings, and you can reverse course by communication with your partner to work through issues.

Read on to find nine signs that your relationship might be on its last legs.

1. Both Of You Have Stopped Making An Effort

If you’ve both stopped making an effort to connect, the relationship may be nearing the end. What’s a sign of making less effort? "When you eat meals together and can’t muster a conversation because you’re not interested in doing so, or you’re annoyed at the other person and the way they chew sends you into fits of annoyance," Relationship and etiquette expert April Masini tells Elite Daily. Not making an effort to even chat over dinner could be a sign the relationship is on its last legs.

2. You Find Yourself Lying To Your Partner

Maybe you start by telling small white lies, but pretty soon you’re giving your partner completely inaccurate accounts of where you’ve been all day. It’s OK to have secrets, but frequent lying could be a sign that you’re not comfortable in the relationship and want it to be over.

Bickering is totally normal, but sometimes, if it’s too frequent, it could mean the relationship is struggling. "Do you bicker all the time? Chronic bickering is a sign that more is wrong than right in a relationship," Masini says. If you can’t make peace even over the small things, maybe there’s an incompatibility issue in the relationship.

4. You Fantasize About Being Single

It’s OK to have crushes, and even to imagine being with them (I’ve planned my wedding to Jesse Eisenberg through all my serious relationships). It’s also OK to fondly remember being single. It becomes an issue when the fantasies are constant, and you spend every moment thinking about how nice it would be to be single. If this is the case, it could be a sign that your relationship is coming to a close.

5. You And Your Partner Stop Discussing The Future

Maybe you used to discuss a future with your partner but now shy away from the conversation topic — this could be a sign that the relationship is winding down. However, just because you’ve stopped discussing the future, doesn’t mean you can’t start again. "Make a bucket list together, and make it one that’s a couples’ bucket list, not just an individual one," Masini says. If you start planning around a future together, you could save your relationship.

Your sex life could give you a sign about your relationship. "You don’t have much sex. It’s just not that important to either one of you," Masini cites as an indicator that a relationship is coming to a close. However, it’s just a sign — many go through periods of increased or decreased sexual desires, and it doesn’t have to be unhealthy. If you’re unsatisfied with the amount of sex you’re having, consider opening up the communication with your partner to try to work through it.

7. You Don’t Mention That You’re In A Relationship When You Meet New People

Are you hiding that you have a partner? You don’t need to bring it up in every conversation (in fact, doing so can be annoying), but if someone is expressing interested in you and you wait weeks before mentioning you’re in a relationship, it could be a warning sign. Maybe you’ve already mentally checked out of the relationship and you’re starting to look for other options. This is OK, as long as you’re being honest with yourself about whether you plan to stay in your relationship.

Old problems may resurface from time to time in any relationship, but if it feels like nothing from the past ever gets resolved, it could mean the relationship isn’t in a good place. "One or both of you keep bringing up old baggage — like a best friend’s slight at the wedding (ten years ago), or an indiscretion that happened before you got married," Masini says. Ask yourself why either of you is having trouble letting go of the past, and determine if you think your relationship might be coming to a close.

9. You Want The Relationship To Be Over

This is perhaps the biggest sign that a relationship is on its last legs. If you (or your partner) know that you want the relationship to be done, then it’s definitely coming to a close. Breakups can still take a while or one of you could change their mind, but once you start wanting it to end, it’s probably close to finished.

Do any of these signs ring true to you? They’re just warnings, so if you notice a trend but you want to save your relationship, then DW — it’s still possible. However, it could be time to look inward to see if the relationship is really bringing both of you joy. And if your relationship is on its last legs, don’t worry — there’s something more fulfilling for you out there, just around the corner.