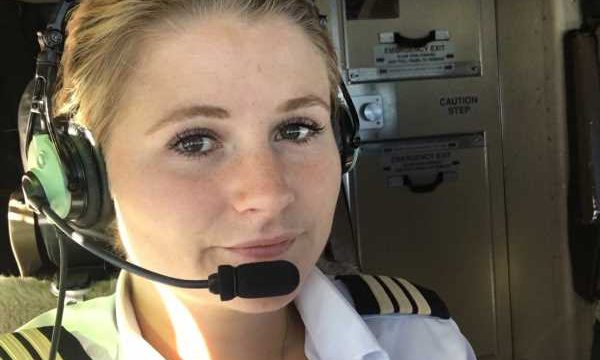 In Bustle’s Quick Question, we ask women leaders all about advice — from the best guidance they’ve ever gotten, to what they’re still figuring out. Here, Ida Björg Wessman, a co-pilot for Icelandair, shares her journey of following her lifelong passion and turning it into a career.

The one piece of advice Icelandair co-pilot Ida Björg Wessman would give her younger self is simple: "If you really want something," Wessman tells Bustle, "then you should go for it — and really nothing can stop you as long as you put your mind to it."

Björg Wessman didn’t need to travel back in time to give her younger self those words of wisdom: She appears to have followed that inspiring advice in her career anyway. She has been flying since she was a child, and like her father before her, she knew throughout her life that she wanted to become a professional pilot. "I always kind of wanted this, and I headed for it for quite a long time," she tells Bustle. "I knew it would take time and patience — but I have always had the focus."

And that focus paid off: She launched her career as a flight instructor at the Icelandic Flight Academy before joining Icelandair as a co-pilot in 2016, where she’s been piloting flights since.

In addition to the hard work involved in actually becoming a pilot, Björg Wessman has certainly had to overcome the stereotype that being a pilot is "a man’s job" — and she wants to encourage women to follow this path if their hearts desire it. "There’s a lot of men in this business, so I think it’s important to promote that it’s also for women," she shares. "I would definitely like to see more female pilots — so if it’s something that women want to do, then it’s important that they go for it."

Now, Björg Wessman is taking on a new phase in her career: Balancing it with motherhood. She’s recently become a mom, and spent the beginning of 2019 on maternity leave before returning to Icelandair in May 2019 to continue doing what she loves: Flying.

Here, Björg Wessman shares with Bustle a bit about the advice she’s heeded (and ignored) through her career, navigating getting back to work post-maternity leave, plus a few frequent flyer pro-tips on how to feel good on a plane and why turbulence is nothing to freak out about.

Ida Björg Wessman: Basically my to-do list is getting back to work! I have not been flying now for 10 months or so, so on my to-do list these days is just reading up on all the stuff that I have kind of missed during this time, just to refresh my memory. And then it’s just to get back and you know, do my work the best I can.

How do you transition out of work-mode at the end of the day?

IBW: You know, in my line of work it’s quite easy, because you can’t really take the plane home with you! As soon as I leave the airport, I just have maybe a couple of things to do, but I do that on my way home because we have shuttle buses and stuff. Then when I walk in the door, I’m just 100 percent home, because I can’t really take that much of my work with me.

What is the best piece of career advice you’ve ever received?

And how about the worst piece of career advice you’ve received?

IBW: Well, I once had someone tell me that I couldn’t be a pilot because I’m a woman — because you couldn’t really have a family, and because the kids need their mother at home, so therefore I shouldn’t go for that. That was probably the worst piece of advice I’ve ever gotten.

What are you seeking advice on at this point in your career?

IBW: I had a baby [a few] months ago, and I have been seeking out advice for the last couple weeks about how it’s best to get back to work after that with a job that’s not like, nine to five or whatever. I have been taking a bit of advice from other pilots that have been in a similar situations for the last couple months. I have a friend that was a couple of months ahead of me in having a baby, so I’ve used her a lot.

What would you tell somebody just starting off in your industry?

IBW: I would tell them it takes patience if you want to be a pilot. A lot of it. Because it’s quite unsteady, there’s a lot of ups and downs. It can be difficult to get a job, especially one that you would like to be in for a long time. So, you know, it takes a lot of patience. And then, I think it’s really important that if you want to become a pilot, you really have to love flying — or else I think it’s just the most boring job in world if you don’t love it. So patience and a love for flying is the key!

What is your back-up plan?

IBW: I have thought about it, because as I said, it’s quite unsteady — but I haven’t really figured out something that I would like to do instead yet. I have a couple of things, but for now I’m just hoping that everything will work out with this.

Out of curiosity, how do you handle the physical effects of being on a plane so much?

IBW: I think when you fly, it’s a combination of the high altitude and then the air in the aircraft is very, very dry. So you kind of dry up, and that’s probably what people feel, and the key is really just to drink a lot of water when you’re traveling … and then it’s important to stand up once in a while and take a little walk to the bathroom or something, to really just, you know, get the blood flowing.

But then for me, it’s never really been an issue. I did fly a lot as a kid and as a teenager, and I haven’t really ever felt bad after a flight. For me it’s not really a problem, it never has been. But I do drink a lot of water to compensate for the dry air, and I do stand up as much as I can, just to stretch my legs a little bit, and then sit back down.

Lastly, here’s a question in behalf of all the plane-phobic people out there. Is turbulence on a flight something to worry about?

IBW: No, not at all. I would always recommend that people keep their seat belts fastened, because really the thing to most worry about during turbulence is that if you don’t have your seat belt fastened, you could bump your head on the overhead bins or something. But the turbulence itself is nothing to worry about it. It’s really quite a normal thing, and it’s the least of my worries. Flying is very safe. I’m a lot more scared of driving to the airport than sitting in the plane. I feel just as safe sitting on board an airplane as sitting on my couch in my home.

This interview has been edited for length and clarity.