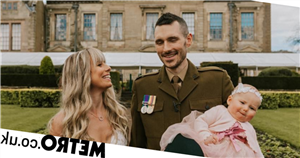 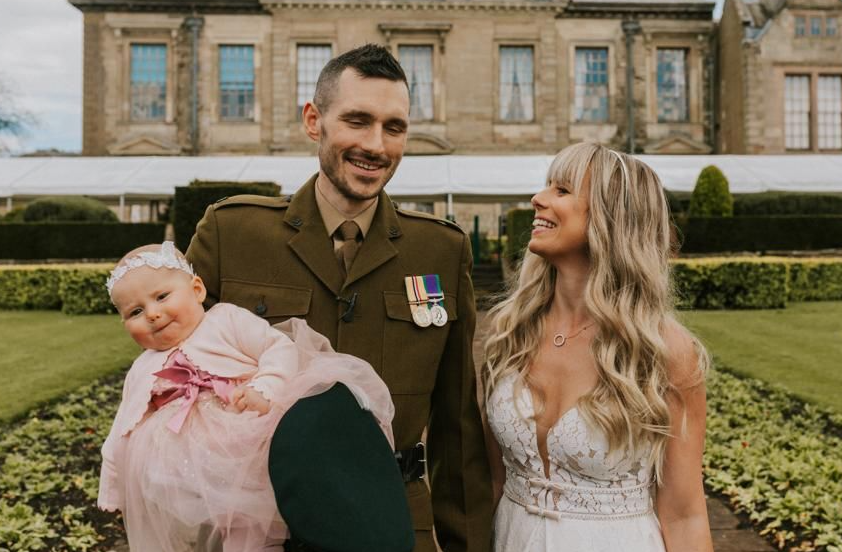 There’s not a day since my husband Owen’s death that I’ve been able to lay in bed, cry and mourn properly. I have to be strong for our daughter, Luna.

But I know the coming weeks are going to be especially difficult.

That’s because Owen died almost exactly a year ago, on 27 December 2021, which means Christmas will forever remind me of his passing. He was just 40.

Last week, I went to the shops to try and get Luna some birthday and Christmas presents because it was her second birthday on 18 December. However, hearing festive music sent me into a grief spiral.

The thought of it all being on me – Luna’s birthday, Christmas, and everything – it was a huge pressure.

That’s why this year I’m trying to distract myself as much as possible, but the grief is still all-encompassing.

While the world’s attention was on Covid, in March 2020, Owen and I were focused on his bowel habits. A rearranged colonoscopy from February meant that when he went in for his examination the following month, I had to wait in the car.

Owen had been experiencing painful symptoms for at least four months by this point; his bowel habits had massively changed, he had lots of blood in his stool, and he’d lost a significant amount of weight.

From the offset, he spoke about how he felt openly with me – we’d always had that trust and honesty in our relationship. I’m also a nutritional therapist, and we both thought it could be something like coeliac, a parasite or something similar.

I assumed when Owen went in for his colonoscopy, he’d be out soon after – doctors had previously told him it was probably a pile that had popped – but when the nurses came to my car to grab me, I knew something was wrong.

‘We think it’s cancer’, they said.

Owen was sent for a biopsy that same day and when it came back it showed that he had bowel cancer, which had spread to his liver. It was stage 4.

Two weeks after he was diagnosed, we also found out I was pregnant. We hadn’t been trying so finding out we were having a baby came with a whirlwind of emotions, but Luna was our joy – and for me, she still is and always will be.

At the same time, we were hearing lots of bad news from doctors. They said his tumour was too big to operate on and that he needed chemotherapy. We stayed positive throughout, but his cancer spread and grew and any treatment he had just left him more and more unwell.

His original prognosis was a year, but as the treatment stopped working, this got shorter and shorter. By the time I was three days postpartum in December 2020, doctors were saying Owen had two months left.

But Owen was nothing if not determined. Nurses were amazed at how he kept on going and would say to me, ‘whatever you’re doing, keep doing it’. Alongside his treatments, we’d been doing holistic and alternative therapies.

We married in May 2021 in a beautiful ceremony. Owen was on a clinical trial at this point and he had his next treatment just two days after the wedding.

It sadly made him really unwell, but he didn’t want to give up hope, so didn’t tell anyone but me. As soon as he admitted it to doctors – a couple of months later – he was pulled from the trial immediately.

After that, they said there was nothing more that could be done.

He had another round of radiotherapy, but after that his health deteriorated quickly.

He was bed bound from the beginning of September, with recurrent obstructed bowels. By November – when it was his birthday – he wasn’t in a good way at all.

We managed to get out of the house for a birthday lunch for him. I wasn’t sure he’d have the strength, but we went to a little farm shop up the road and ate there, with Luna playing on the swings.

Looking back, I think, how did we do that? I knew what was happening, I could see it.

On 7 December, I took Owen in for hospice care to get on top of the pain as it was so bad; it was a last resort really. It was only meant to be for a couple of days. We had hoped he would be home with his pain being managed by Luna’s 1st birthday.

But on that day, his health took a massive nosedive. He hadn’t slept for 48 hours and the tumour in his rectum making him so uncomfortable that he couldn’t sit or lay down. The nurses were giving him morphine and a cocktail of other drugs as often as they could but nothing would settle him.

The palliative care nurses told me they’d have to keep him in overnight and I was left torn. Luna was at home with my mum looking after her, and having never spent a night away from her, I couldn’t face doing it now – but I also didn’t want to leave Owen.

I decided to go home to Luna, but I spent the entire night terrified. Nurses weren’t sure Owen was going to make it through and I called constantly to check in on him.

I was so used to him being asleep in the next room; being able to pop in to check on him. Knowing I couldn’t be with him was a horrible feeling. Before he’d got ill, we’d never spent a night apart.

As soon as I woke up the next day, I drove to the hospice. Owen still hadn’t slept because he was in so much pain, and it took me settling him and the nurses administering an awful lot more pain relief for him to finally rest.

It was 3pm when he fell asleep and the staff were convinced he wasn’t going to wake up. My heart was breaking.

Thankfully he did, and three days later he was happily eating pizza we had delivered there for him!

But I realised he wasn’t going to ever come home, so our daughter and I moved in. The hospice has an apartment and they were amazing – they gave it to us so our family could be together.

We didn’t know we would be there for three weeks.

With Covid-19, he was only allowed to have six people visit him. The hospice was incredibly understanding – letting people in to help me with Luna.

Owen was getting worse toward Luna’s first birthday, which was on 18 December, but he woke up for a couple of hours that day. It was hard, but I was really glad that he was there.

From 22 December, he didn’t wake up again and one of the last things he had said to me was ‘I want to go home’. I kissed and cuddled Owen to try to soothe him, but I felt so guilty.

If he wanted to be home, I wanted to get him home. I spoke to doctors and nurses, to independent companies who would facilitate the move. I looked into ambulance hire and carers to help get him set up in our house.

In my heart of hearts though, I knew Owen was safest where he was. He hated travelling in ambulances as he couldn’t get comfortable, and I couldn’t reasonably look after him like he needed with a baby to care for too. Owen’s kind doctors and nurses helped me realise that.

Still, Christmas was horrific. Luna and I slept in a hospital bed next to him every night. On Christmas Day, we just played in his room and my friend surprised us with lunch. I strongly believe that Owen didn’t want to die on Christmas for us.

The last year has been incredibly difficult without him, especially because Luna is so young.

Over the last few months especially, I’ve felt like I’m stuck. There’s part of me that wants to live in the past because that’s where he is, but I also don’t want to because I really want to move forward.

I’ve had to do a lot of work on myself to try to heal. It’s hard to put into practice and it’s also incredibly hard to parent when you’re also grieving.

It’s also hard being around families, so we’re going to go and get some sunshine this Christmas and I want to make it a tradition.

We’re going abroad with one of my best friends.

I don’t want to be here, as well as it being Christmas, it feels like I’m constantly replaying a video of last year at the moment.

Luna’s birthday last year and Christmas were essentially non-existent. I don’t want her life and her memories or experiences to be tainted by my pain and my grief, or the fact that I’m struggling because of what happened last year.

I want to make it really special for her. And for us – I want to live.

Luna’s my life. She’s my driver. Without her, everything would have been different.

That’s why we’re going to go away and try and have some fun, smile, play in the sand and make some new memories.

I want to be the best mum I can be because I’m all she’s got now.

Laura has been supported by Widowed and Young

As told to Claire Eaton-Rutter