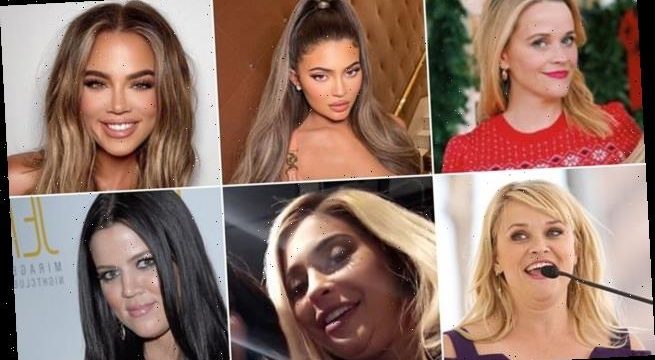 NEVER have a double chin in photos again: Experts reveal the secret ‘peach holding’ trick celebrities use to achieve a flattering jawline

With Christmas around the corner, many people will be pulling out their camera for the festive photo with family of friends.

And in the hope of avoiding any Christmas tantrums over bad photos and unflattering angles a photographer has revealed the technique used by celebrities and models to avoid having an double chin in snaps.

Speaking exclusively to Femail, Renata Cesar, founder of the Art of Being Photographed, revealed that pretending to hold a peach under your chin is the best way to avoid the appearance of unflattering neck rolls in photos.

Renata, who is originally from the US but is now based in London, revealed that the technique is used by many celebrities including Kylie Jenner, Reese Witherspoon  and both Khloe and Kim Kardashian.

And with more of us spending time on video chats over Christmas, for both work and socialising, Renata also revealed how to avoid any bad angles on Zoom… 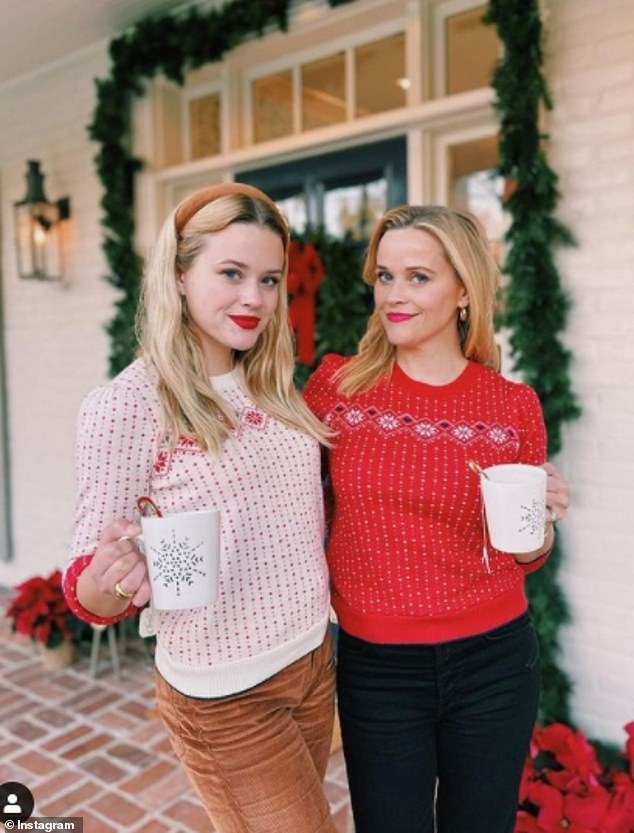 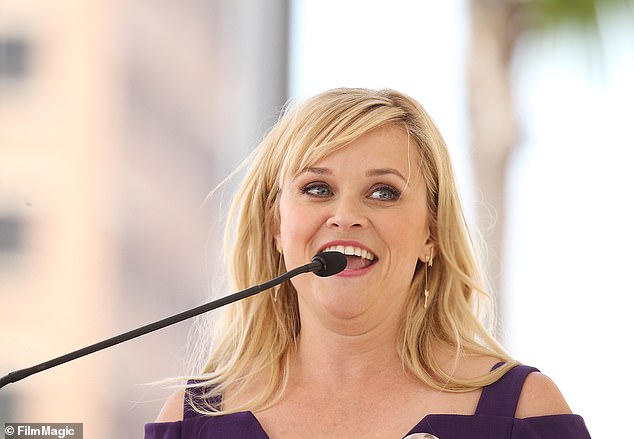 In a candid photo Reese Witherspoon is pictured attending the ceremony honoring Goldie Hawn and Kurt Russell with a Star on The Hollywood Walk of Fame held on May 4, 2017

‘The best way to keep from looking like you have a double chin on Zoom is this simple trick used by influencers, celebrities and politicians every day.

‘Don’t hold your chin in its everyday position in front of the camera. Draw your chin forward in a slight arc, as though you have a peach tucked under it,’ she explained.

‘It works if you actually have a double chin. And it works if you don’t have one, but seem to on Zoom. It can feel unnatural at first, but the final result looks right.

‘Why do you need to do this? If you are self conscious on a video call, you are likely to draw your head back, just a little. Try it—you can feel that it squidges your chin against your neck, bunches up the lower part of your face, and thickens your neck. 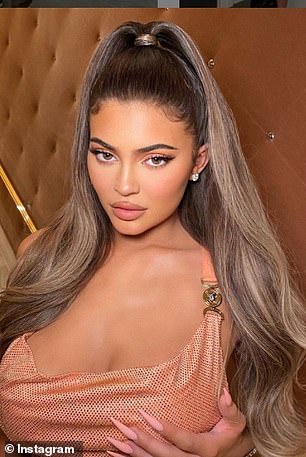 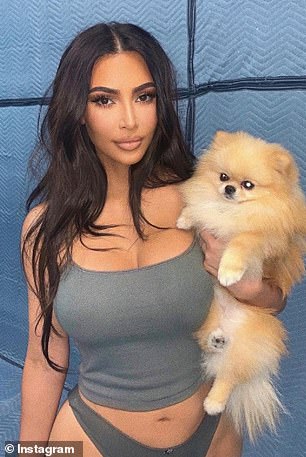 She’s known as the Queen of Selfies and gets millions of likes everytime she strikes as pose, and now it can be revealed Kylie Jenner (left) and sister Kim (right) usesthe peach technique in photos 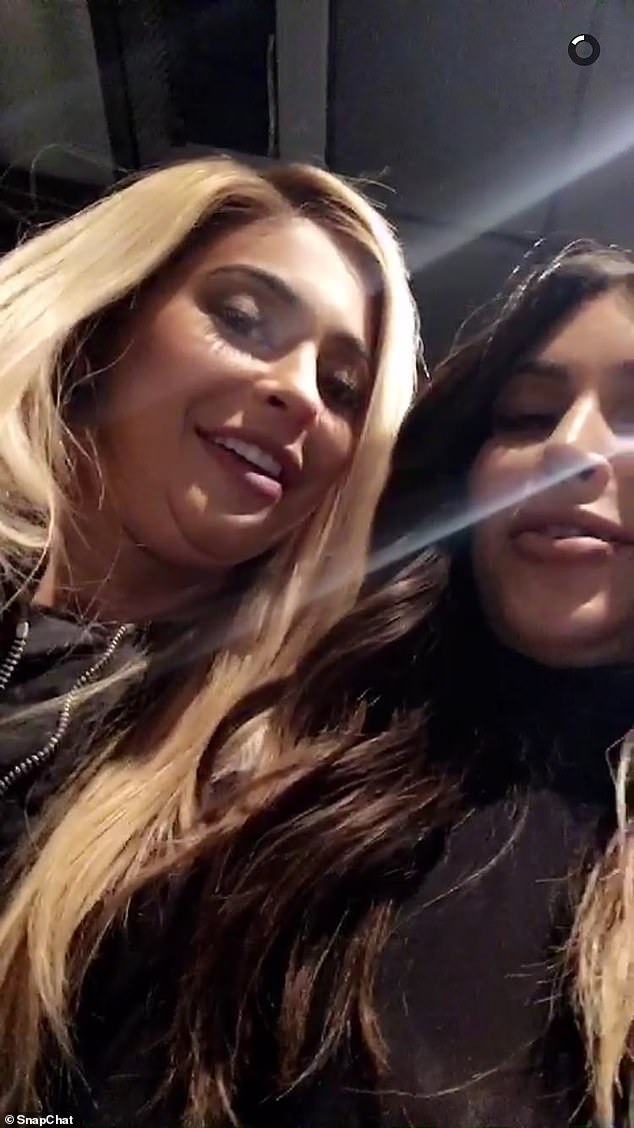 No peaches here! Kylie and Kim are seen posing at a less flattering angle in a SnapChat picture

‘An extra-big smile makes it all bunch up even more. You will see how you look on screen and sit there thinking misguidedly about the size of your chin.

‘But if you draw your chin forward, and tuck that imaginary peach underneath it, you can change it significantly.

‘Now you are physically separating your chin from your neck, and reducing the bunching-up effect. 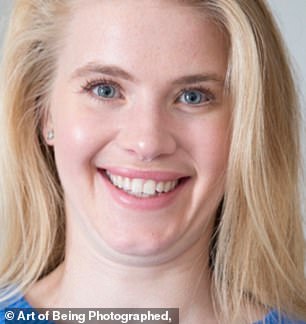 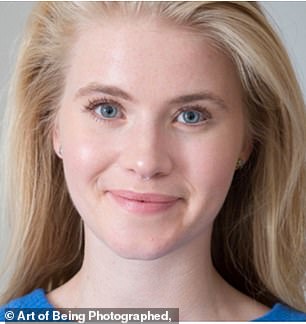 Speaking exclusively to Femal, Renata Cesar, founder of the Art of Being Photographed, revealed that holding an invisible peach under your chin is the best way to avoid the appearance of neck rolls in photos. A model is pictured trying the technique 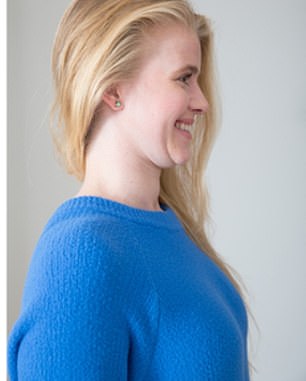 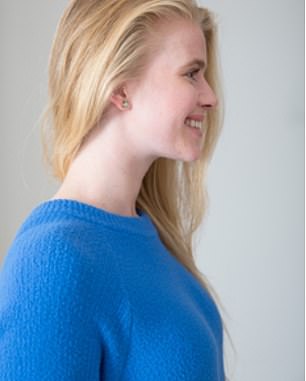 ‘Since there is more distance between your face and your neck, the camera sees them as two distinct and different surfaces rather than letting them run together.

‘This makes your jaw looks more contoured. Your neck looks slimmer. You may find a bit of shadow is cast under your chin as a result, which is slimming too.

‘Moving your face towards the camera is always flattering in a photo. It makes your head and shoulders look slightly larger in comparison to the rest of your body, which is helpful if you want to look slimmer.

‘It focuses our attention on your face, and it adds something dynamic and engaging to the photo.

‘If you ever take a selfie with someone famous, you will notice that they always lean slightly towards the camera and bring their faces forward to cradle the peach. 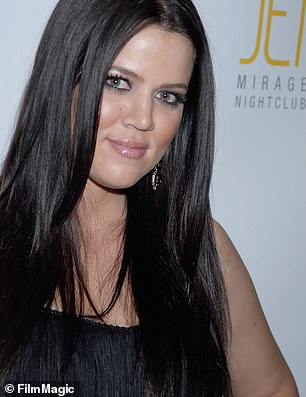 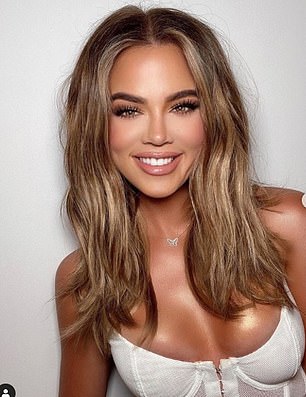 Just like her sisters Kim and Kylie, Khloe Kardashian has been seen using the peach technique (right) to avoid less flattering angles (left)

Most of us know surprisingly little about the photographic techniques for looking great on Zoom.

Here are three secrets photographers know about Zoom that you should know too: 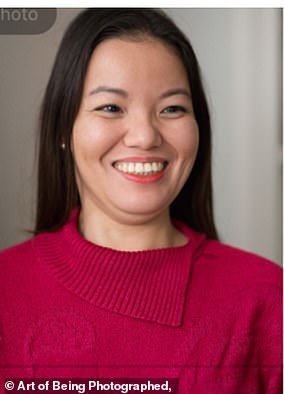 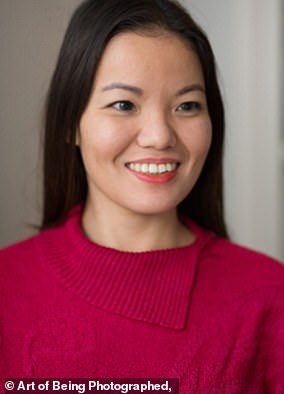 It works from all angles! A model is shown using the peach technique from the side

1. ADJUST YOUR CAMERA HEIGHT AND ANGLE

Every camera follows a basic principle that photographers use to change how we look in photos and videos: whatever’s closest to the camera looks the biggest. Experiment with how high your device’s tiny dot of a lens should be by adjusting its height. Use a stand or a pile of books, or try tilting the angle of your screen to see how different parts of your face look closer to the camera.

The height of the camera affects not only your facial features, but also the impact you make.

Lowering your device gives you the Emperor Effect:

This angle can give you an aura of authority, competence and power. It is heavily used by business executives and politicians for still photos and videos – just don’t put the screen so far below you that all anyone sees is a pair of huge nostrils!

Raising your device gives you the Baby Face Effect:

Larger foreheads, big eyes and smaller jaws appeal to us, since we associate them with a childlike appearance. This angle can make you look more friendly, approachable and personable. But you might also appear less competent. Consider the trade-offs.

Everyone looks bad in bad lighting. Think about what kind of lighting you have, and where it is. The best place for a video call is facing a window. Many of the complicated lighting arrangements in professional studios try to mimic window light.

If you have daylight, whether it’s sunny or cloudy, just turn off the indoor lights and face your window for a uniquely flattering light. Try it and see.

If you have blinds, you can diffuse the light to give your face a slightly smoothing filter. Some video conferencing apps have something similar, such as Zoom’s subtle ‘Touch up my appearance’ option under Preferences/Video.

A light directly above you or directly below you casts strange shadows on your facial features. And a light behind you creates a highlight for the camera lens: it will burn out part of your image with a patch of pure white, which is tiring for people to look at for more than a few minutes. But a light in front of you smooths away undereye shadows and softens your features and your skin. If you can sit in front of a window, or put a desk lamp on the other side of your device, so it shines gently on your face, you will see the difference.

To get the effect of daylight, a light therapy lamp can be rigged up to your computer for a flattering white light. Influencers and celebrities invest in all kinds of lighting products to help them look their best. But any light shining in front of you will help you put your best self forward.

3. MAKE EYE CONTACT, WHICH IS NOT THE SAME AS LOOKING AT THE OTHER PERSON ON THE SCREEN!

The reason you’re on a Zoom call is to connect with someone, and making eye contact is the best way to do that. Because we are looking at our screens, and not at the lens, we are all having conversations apparently not looking at each other. Video calls can feel unnatural because we don’t remember to look at the camera lens. We look at the screen showing the other person’s face, or we look at our own image. This is really obvious to the other person, mesmerizing though it is to us.

So how do you go about making eye contact? Look at the dot of the camera lens: you will seem to be looking directly at the person you are talking to! No one can do this all the time, but when you catch yourself admiring yourself on the screen, try redirecting your eyes to the camera lens. Imagine a bullseye or an eye around the tiny dim dot, or just stick a hole reinforcer on it.

If you have several windows open, keep the window with your conversation centred. Otherwise your eyeballs turn to the side as you look at the other person/your own face, and the whites of your eyes face the camera the whole time. It’s also obvious if you are reading something in another window: your rhythmic eye movements give you away.

Group calls can be tricky because of the lack of eye contact–our eyes are giving off confusing signals. Real-life conversations are a kind of dance in which people take turns speaking, with their eye signals telling us what to do next. For example, people avert their gaze when they are speaking, and then look at us as they are finishing and giving up their turn. While they are talking, in real life, we are looking steadily at them. We don’t even realize we are doing it. But on video calls, because we are looking at our screens instead of at the camera, we are all looking in different directions. So we jump in to talk at the wrong time. Being conscious of what your eyes are doing, and what they appear to be doing, can help.

Appearing to look into your viewer’s eyes is meaningful: it overcomes social distancing. If someone feels they have your attention, they will certainly remember it.

Once you sort out the practicalities of photographic techniques, you can be confident you are presenting yourself at your very best. Ultimately, when you feel confident in front of the camera, you can forget about how you look and focus on what matters most—your interactions and your relationships.