The Mythical Pokémon Arceus has gotten plenty of attention since Pokémon Legends: Arceus debuted on Nintendo Switch. Now players can officially catch it in two other Pokémon games: Brilliant Diamond and Shining Pearl. This is an exciting development for those who couldn’t snag the Legendary in the original installments. Here’s how to get Arceus in BDSP.

Arceus is available in ‘Pokémon Brilliant Diamond’ and ‘Shining Pearl’

Arceus may play a pivotal role in the formation of the Sinnoh region, but the Mythical Pokémon doesn’t actually appear in the original Diamond and Pearl games. In fact, players were only able to get their hands on it through a movie promotion. Those who missed out couldn’t access it without hacking the game.

Fortunately, players who never got Arceus in the older installments can rectify that now. Thanks to a new update, Arceus is available in Pokémon Brilliant Diamond and Shining Pearl.

Of course, there are a few prerequisites to encountering the Legendary. So, how can players go about it?

How to catch Arceus in ‘Brilliant Diamond’ and ‘Shining Pearl’ 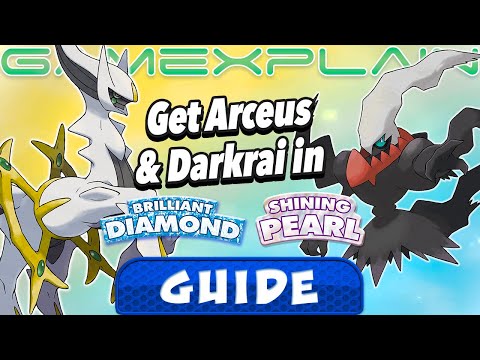 The Pokémon Company revealed on its website that players can encounter Arceus in Brilliant Diamond and Shining Pearl if they download a new software update (version 1.3.0).

To run into the Legendary in BDSP, players also need to have beaten the main storyline in Pokémon Legends: Arceus. The Switch they’re using must have a save file from the game — one where all main missions are completed.

In Brilliant Diamond and Shining Pearl, players also need to collect the National Pokédex from the Hall of Fame. Once they’ve met those requirements, they can head to their bedroom in BDSP and obtain the Azure Flute.

With that object in hand, a trip to the Spear Pillar on top of Mount Coronet will prompt an encounter with Arceus. Of course, they’ll need to fight the Pokémon in order to add it to their Pokédex. Anyone attempting this should make sure their team is well-trained and that they’ve saved beforehand.

In addition to making Arceus available in Brilliant Diamond and Shining Pearl, The Pokémon Company also announced an opportunity to catch Darkrai. Players can encounter the other Legendary Pokémon through the same update for the Diamond and Pearl remakes.

Darkrai’s requirements differ slightly from the ones for Arceus. Players still need the National Pokédex from the Sinnoh region’s Hall of Fame. However, they’ll also have to obtain the Member Card item through the games’ Mystery Gift feature. This will be available from April 1 to 30.

Once players have done both of these things, they can travel to Newmoon Island to find Darkrai. Again, taking advantage of a powerful team and the save button is a smart strategy.

By following all the necessary steps, players will soon add two coveted Mythical Pokémon to their BDSP Pokédex: Arceus and Darkrai.

Software update 1.3.0 is now available for the Nintendo Switch.