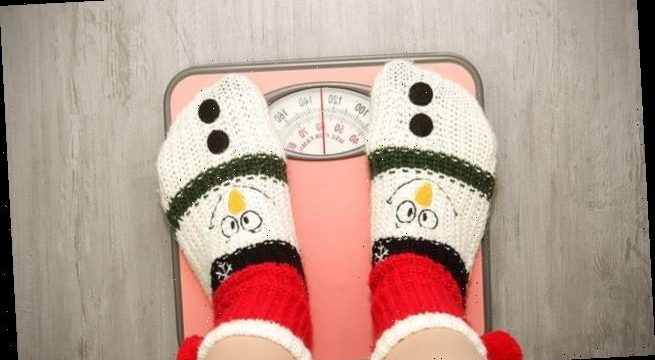 How to avoid piling on the pounds over Christmas: Experts reveal their weird and wonderful tricks – from turning the lights off in the kitchen to spraying leftovers with washing up liquid

Christmas is a time for delicious food… but one too many festive treats and our waistlines can quickly expand.

Fortunately there are simple tricks everyone can try to keep the weight off over the festive season – and some even claim to be fun.

FEMAIL asked three UK-based health, fitness and lifestyle experts to share their tips, including creating an exercise ‘game’ with playing cards, playing classical music at dinner time and practising just saying ‘no’ if someone offers you an extra chocolate or roast potato.

Use playing cards to create your own exercise ‘game’

The Christmas holidays is a time of playing board games with your friends and family, so why not create your own exercise game that will let your imagination run wild and help keep you fit at the same time, said David Wiener, a training specialist at AI-based fitness and lifestyle coaching app Freeletics.

He said: ‘By allocating each suit or colour to an exercise, and the number on the card dictating how many reps you do, you have the thrill of playing a game and getting fit at the same time. It is also a nice way to get the whole family moving.’

David said: ‘Playing calming music such as classical music, has been shown to help people to eat slower and chew their food more. Eating quickly often leads to overeating, this is because when you eat quickly your brain doesn’t have enough time to receive fullness signals and you will continue to eat.

‘Therefore, listening to classical music will make you eat slower, which in turn could help you to feel fuller after eating less, stopping you from overindulging.’

Swap your plate for a saucer

Ashwin Sunassee, Founder & CEO of Wellfinity, said: ‘Eating from a smaller plate actually makes us feel fuller with less food. The more empty space on your plate, the more you eat, it’s even got studies on this.’

Clair MacKenzie, certified life, health and weight coach and founder of TheBestYou.Coach, said: ‘When you feel the urge to indulge in some sugar and fat laden desert, force yourself to visualise its constituent ingredients.

‘The sugar, the fat, the flavourings and whatever else it contains.

‘When you visualise eating piles of plain sugar, fat, salt, flour – whatever it is – that dessert that you thought looked so delicious may suddenly lose its appeal.’

Practise journaling to track how you feel after food

David said: ‘Spending between 10 and 30 minutes a day journaling or meditating can help individuals to become more alert of their actions and become more mindful during the day.

‘This does not mean logging everything you eat or drink in a day, but rather how you feel after a meal. If you are constantly writing feelings of lethargy and fullness, you will begin to notice a pattern and can adjust your eating habits from there.

‘Alternatively, you can spend some time alone meditating or listening to audio courses to give yourself some time out and a renewed sense of focus.’ 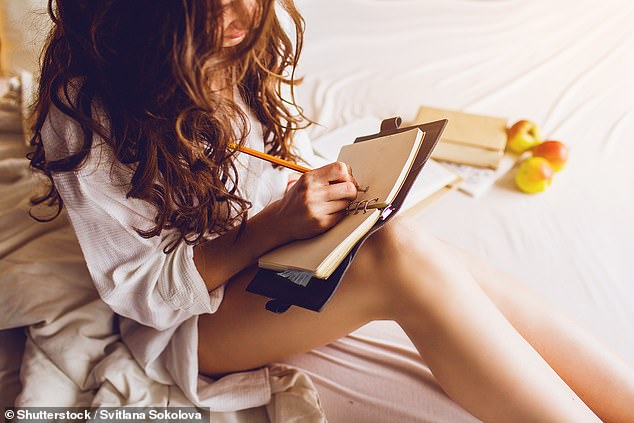 Turnoff the lights in the kitchen to stop snacking

David said: ‘Once you have finished eating your Christmas lunch, try turning off the lights in the kitchen and shutting the door, as if it to say the kitchen is now closed.

‘This will help keep off the extra pounds as you will be less tempted to go back and snack.

David said: ‘Micromovements can crank up the number of calories you burn per day by almost 300 extra calories.

‘Opting to stand instead of sitting down when can help keep off the extra weight you may usually gain over the holidays.’

Choose soup as a starter

Ashwin said: ‘Switching to soups really help with reducing your caloric intake by up to 20%.

‘Then again, it also depends on the soup that you’re having, try and get a low calorie broth, with around 125 calories per serving.‘

Clair said: ‘When you increase the time between meals you give your body a chance to work the way in which it was intended and use your own body fat as an energy source between meals.

‘Also known as ‘dining in’! So, maybe skip the occasional meal for the festive season.’

‘Your metabolism is at its slowest during the evening, so your body will not process late night snacks as well as it would during the day, so avoid dipping into the selection box after dinner!’

Count a hundred chews before swallowing

Ashwin said: ‘It seems everything is just all about instant gratification, even the way we eat. Fill up the tummy when you’re hungry.

‘Whatever happened to savouring the bites?

‘Well it turns out the slower you chew, the more surface area you chomp the food into, the more the salivary amylase and digestive juices get flowing, and the postprandial response of your gut increase, and a decrease in energy intake! Who knew!’

Squirt leftovers with washing up liquid

Clair said: ‘If you tend to pick at leftovers, quickly squirt them with washing up liquid as soon as you can, so that you’re not tempted to finish off what remains yourself.

‘Alternatively, if there is enough for another meal, cover up and package in containers and pop away/freeze as soon as possible, so you avoid picking.’

Smell before you eat

Ashwin said: ‘Yes, we don’t just mean taking a whiff and then gulping it down once, we mean taking the time to actually breathe in the flavours before you eat.

‘A study with 3000 volunteers showed that the more people ate, the less they ate, and the more weight they lost!‘

Visualise yourself in January

Clair said: ‘Think forward to the first of January. Visualise how you will feel standing on the scale having not gained weight over the festive period and feel the vibration of the positive vibes and satisfaction.

‘Remind yourself of that feeling, visualise yourself feeling proud and pleased of your achievement every day before each meal or potential overeating opportunity. Look forward to it, just like you look forward to the anticipation of Christmas day itself.’