THE new coronavirus variant has spread to Israel after being found in Botswana, South Africa and Hong Kong.

Called B.1.1.529, the bug has 32 mutations – twice as many as the delta variant and experts are cautioning that it could force countries back into lockdowns. 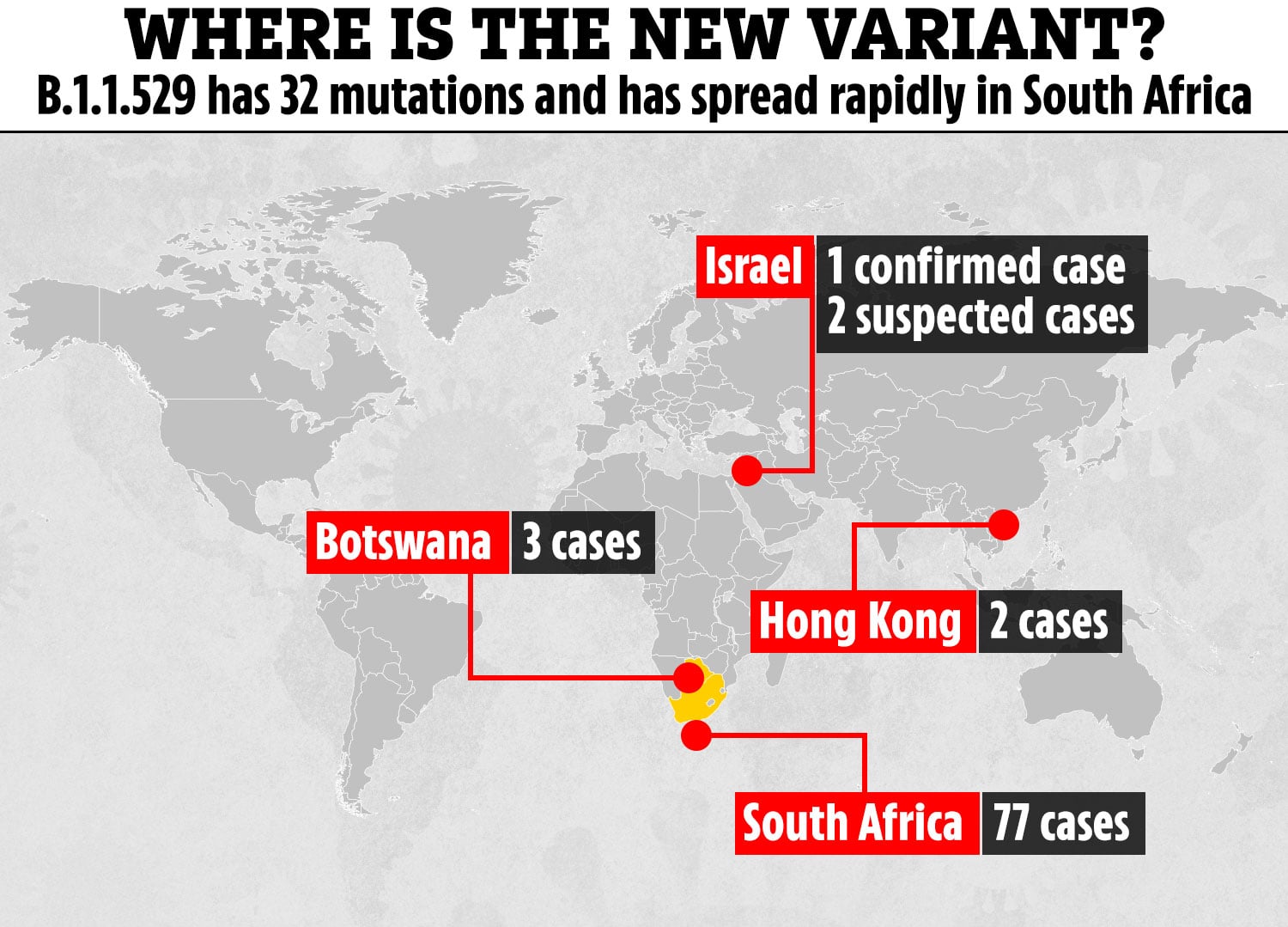 The 'horrific' mutation has been detected in Israel today, with the country's health ministry confirming that one person had tested positive with the strain.

In a statement today, the ministry said two other passengers were also quarantining.

It said that the patient had recently returned from Malawi, which borders Mozambique and Tanzania.

The fact the patient had travelled back from Malawi suggests the variant is making its way through Africa.

There are close to 80 cases of the variant in South Africa and experts warn the strain is behind an explosion of new cases, with some regions seeing a six-fold rise in infections in a matter of days.

The mutation has raised alarm in the country as it has 'spread rapidly' among the young population in one of the country's most populous provinces, Gauteng.

"I ask everyone to be prepared and to fully join in the work around the clock", he added.

Flights from South Africa as well Namibia, Lesotho, Botswana, Eswatini and Zimbabwe will be suspended from midday and all six countries will be added to the red list, Health Secretary Sajid Javid said.

Officials are also desperately trying to trace thousands who have arrived from South Africa in the past ten days.

Two cases have also been detected in Hong Kong after a patient had travelled back from South Africa.

Despite cases now being detected across the globe, experts have said mutations in viruses are normal and that this was 'to be expected'.

Speaking on Good Morning Britain this morning, Professor Devi Sridhar said that as long as the virus has a chance to circulate somewhere in the world, it is going to keep having mutations.

"At some point one of those mutations will have a selective advantage, being more transmissible as we have seen with Alpha and Delta.

"It's to be expected and people shouldn't be worried, we will continue to hear about variants."

She highlighted that the World Health Organisation (WHO) is having a meeting today about the variant and what recommendations it will give to governments.

"I think you're going to see many countries going the same way as Britain , saying we aren't going to watch and wait like we have in the past. We have a booster programme that has been successful – so why don't we hold onto the progress we have and limit travel to those places it could be imported from", she added.