"It's a f—ed up thing to accuse somebody of," Holly said of one rumor about her, while the pair spill on an "escort scandal" and witnessing physical fights in the mansion.

Hugh Hefner wasn’t the only one in the Playboy Mansion who allegedly made it a difficult place to live for former “Girls Next Door” stars Holly Madison and Bridget Marquardt.

On the latest episode of their Girls Next Level podcast, the pair reflected on the “bullying” they say they experienced from the other women in the house, before Hef settled on having them and Kendra Wilkinson as his three main girlfriends.

“You have to understand everything we’re going to talk about is a little bit amplified because we lived in a bubble,” Madison said as a disclaimer at the top of the episode. “We’re in a situation we were financially dependent on, we were invested on the situation and everything in our life depended on the opinion on one man. Any kind of drama you go through can feel amplified.” 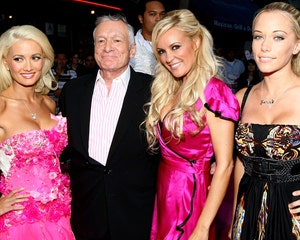 Holly and Bridget first addressed some of the “side hustles” a few of the other women were running and how those gigs led to not only confrontations, but also negative treatment of them, specifically.

Madison said one of the girls orchestrated an “escorting scandal” and was recruiting other women who were coming in as potential Playmates. While Holly made it clear she has no issue with escorting, she felt this woman was targeting green girls “who are literally fresh off the bus from Idaho and don’t know what they’re getting into.” She claimed the same woman also started a website where she charging visitors to view nude photos she claimed “Hef took of the girls” during bedroom time. “She would take those photos and put them on the website without girls’ consent,” said Madison, who eventually told Hef what was happening.

“He went down to that girl’s room and confronted her … and he told her I was the one who told on her. Which is so messed up and he knows what he’s doing when he does stuff like that,” she added. “That girl had her claws out for me bad after that. She got in my face.”

Bridget, meanwhile, said another woman was selling access to parties at the Playboy Mansion, trading money, Rolexes and up to $1,500 for a spot on any of the girls’ guest lists. When she told Hefner’s secretary Mary O’Connor about it, she called a meeting with Hef, who allegedly told Bridget, “Thank you so much for telling me this … your status just went up a whole bunch of points in my book for telling me this.”

“That felt good but I didn’t feel good. I never meant to be a narc or a rat on something,” said Bridget, who was worried about ticking off “the bully of all bullies.”

The woman in question, however, thought Holly was the one who ratted on her and confronted her about it instead. Madison felt the only reason Hef kept this girl around was because she helped “recruit other girls into the bedroom,” but eventually she was kicked out of the mansion. 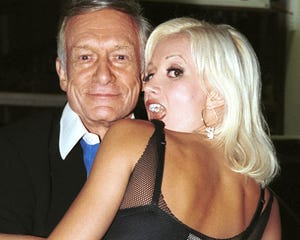 Both Holly and Bridget claimed they tried very hard to get along with the other girls in the house, but it was an “impossible” task. Marquardt said some of them would often have fun together on hikes, but “the s— would start again” the moment they got home, as the women who went out with her would “get in trouble” for hanging out with Bridget. “They were threatened,” Holly suggested.

Madison said things got so bad, they held a house meeting to talk about why they weren’t getting along — but even that had an ulterior motive.

“I found out later, because one of the girls publicly admitted it, they were recording me without my knowledge the whole time and the whole reason they called that meeting was because they wanted to catch me saying something about Hef they could take back to him and be like, ‘Look, she said this, let’s kick her out,'” she said. “I’m so glad that person admitted that publicly because now I know I’m not crazy.”

The two believe they were “hated” because they made the other girls look bad by defending him, and going along with Hef’s sometimes old-fashioned habits — like classic movies nights — and were standing in the way of them getting “more money out of” him.

“I was super loyal. And they weren’t like that,” said Holly. “I don’t care if you don’t like old movies or don’t want to go to a thing, but they would be really rude to him or disrespectful or they would come and give him a kiss on the cheek and the second they turned around they’re like wiping their mouths and making gagging noises.”

“Like they’re about to throw up,” added Bridget. “And he wouldn’t see that, but we would and they would think they were so funny and cute for doing those things. And they were so over the top materialistic.” 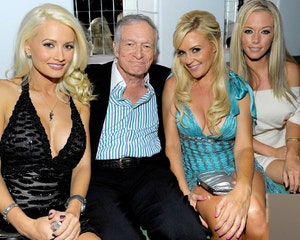 When they then got into some more of the specific, “destabilizing” bullying they allegedly experienced, they said they both had hurtful and possibly damaging rumors made up about them in attempts to get them booted from the home.

“They started lots of rumors about me. One rumor was that my sister was actually my daughter,” said Bridget, claiming that rumor “got so out of control” a tabloid reporter went to her hometown, confronted her parents with the gossip and even pulled her sister’s birth certificate before realizing it was a lie. Another rumor was that she was a stripper — which Bridget said wasn’t demeaning to her, but was something which would have bothered Hef.

“I know what they were trying to do with that rumors, because Hef didn’t want strippers as Playmates and you wanted to be a Playmate,” Madison clarified, before adding the women also started a rumor Bridget was dating her manager.

“They also tried to say I was older than I was, they kept acting like I was lying about my age,” added Bridget, before Holly detailed the scariest rumor started about about the two of them.

She said that after a night at the Saddle Ranch, where one girl rode the bar’s infamous mechanical bull, Hef pulled her aside and asked her if she drugged the woman’s drink. He then allegedly told her, “She says that she’s really embarrassed about riding the bull last night and she only did it because you and Bridget drugged her drink.'”

“I was like, ‘What, are you kidding me?!’ If somebody wanted to drug a drink there, they’d have to be real slick,” said Holly. Added Bridget: “My jaw was to the floor. I couldn’t even wrap my head around how we could possibly be accused of a thing like this.”

Holly said it was “a f—ed up thing to accuse somebody of,” with potentially criminal consequences — while Bridget said she “felt like it came absolutely out of nowhere.”

Bridget also said she eventually felt “physically threatened” in the house and started locking her bedroom door. She also claimed she “watched one of the girls totally tackle Crystal down and rip her shirt off and get in a wresting, tackling, weird assault” situation. “All of us thought it came out of nowhere. It was very weird and very scary,” she continued, “I felt like nothing was safe. I didn’t think anything I said was safe, I felt like my physical safety was threatened, I really felt like I was walking on eggshells.”

Just before Hefner settled on just his three girlfriends for “Girls Next Door,” Madison said the other girls also “boycotted” her birthday.

“There were times I felt like I can’t keep doing this,” added Bridget. “It was so taxing and so hard to deal with that on an almost daily basis.”

Listen to the full episode below: