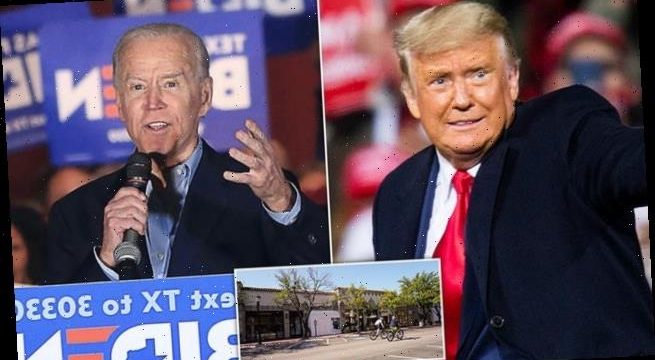 HENRY DEEDES: As Democrats dream of turning the state blue for the first time in 44 years, the tussle for Texas is as tight as bark on a tree

Highland Park is a rich man’s playground where the money runs so thick through the streets it practically bubbles out of the potholes.

Row after row of chocolate box houses are dutifully patrolled by members of the town’s very own public safety officers.

Out in front, every drive is immaculately manicured, while freshly minted Ferraris and Aston Martins glisten in the beautiful autumn sunshine.

And who can blame them? 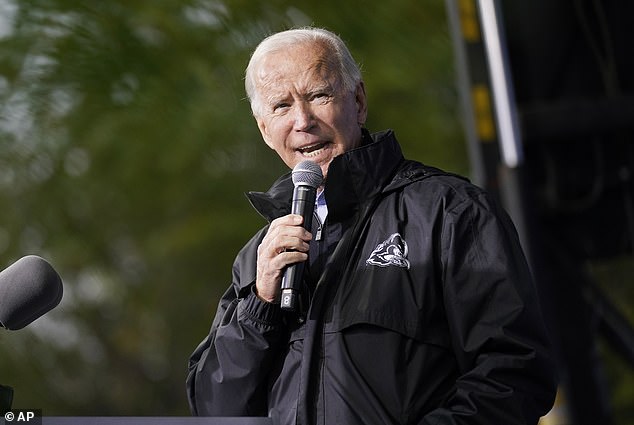 Republicans can no longer consider Texas the impregnable fortress it once was. Pollsters put Donald Trump and Joe Biden (pictured in Philadelphia) almost neck-and-neck in a state which has been doggedly ‘red’ since 1976, writes HENRY DEEDES

This is where locals think nothing of paying £50 to lunch on wagyu beef tenderloin at their local shopping plaza – dubbed the ‘Rodeo Drive’ of Dallas – while their pneumatic wives arrive laden with bags from Cartier or Tom Ford and order expensive Napa Valley wines.

At one restaurant I passed, even the lasagne would set you back £30.

Worse yet, those damn commie Democrats might take away their precious guns. In the local firearms store, where personalised Beretta shooters cost as much as £100,000, I watched one local, Mark Smith, snap up a hunting rifle big enough to stop a bull elephant.

The five-minute transaction looked no more complicated than buying a six-pack of beer. When I asked Smith who he was voting for tomorrow, his face became so contorted with rage I worried he might turn his new acquisition on me.

‘Donald J Truuump, o’course,’ he barked. ‘The greatest president in our HISTORY.’ Leaning to my ear conspiratorially as he tapped his gun case and drawled: ‘Ya know, he’s of a right miiiiind.’ 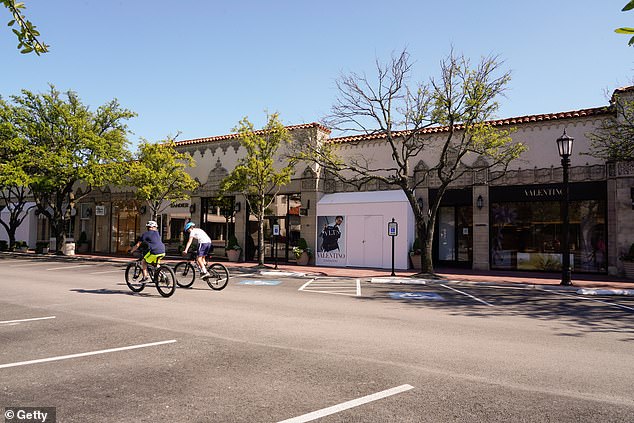 Highland Park (file image) is a rich man’s playground where the money runs so thick through the streets it practically bubbles out of the potholes, writes HENRY DEEDES

The store’s kindly manger, a wonderfully moustachioed chap called Bob Yonker, just looked at me and chuckled: ‘No need to ask me that, son. I work in a gun store…’

Yet despite this unique microcosm of staunchly conservative America, Republicans can no longer consider Texas the impregnable fortress it once was. Pollsters put Trump and Biden almost neck-and-neck in a state which has been doggedly ‘red’ since 1976.

Such is the Democrats’ confidence about flipping it, Biden’s running mate Kamala Harris came to address an ecstatic Baptist church audience in nearby Fort Worth on Friday to urge voters to turn Texas ‘blue’.

Once upon a time, even the mention of the word Democrat four days before polling day round these parts would have been accompanied with a disgusted hail of tobacco spit. But these topsy-turvy political times have taught anything is now possible.

It’s hard to exaggerate just how cataclysmic a Democrat victory here would be for the Republicans.

Not only would it snuff out any chance of Trump’s re-election, it would realign America’s political map for decades to come.

Think how Labour’s election prospects have been crippled by the loss of Scottish seats to the SNP, multiply by ten, and you get the idea. That Trump felt the need to remind Texans about Biden’s hostility toward big oil during the final TV debate a fortnight ago showed just how jittery he is about how people here might vote.

But while the President will carry the shame if Biden ends up carrying the state, the reasons for this seismic shift would not wholly be of his own making.

Early warning signs the tectonic plates were moving down South were apparent in 2016 when Trump won Texas by just nine points, the lowest margin Republicans had enjoyed for two decades.

For years, the electoral demographics of Texas have been shifting rapidly. 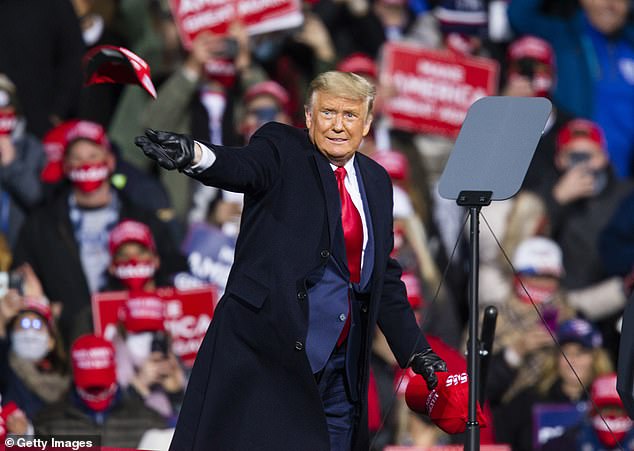 But while the President (pictured in Pennsylvania) will carry the shame if Biden ends up carrying the state, the reasons for this seismic shift would not wholly be of his own making, writes HENRY DEEDES

The caricature of the Lone Star state as home to JR Ewing oil barons in ten gallon hats and gun totin’ fruitcakes are long gone.

There is now a booming Latino community in Texas, which has grown nine times faster than the white population in the past two years. And the majority of them are backing Biden.

Paloma Diaz, an associate director of programs in Latin American Studies at the University of Texas who is ‘praying’ for a Biden victory, tells me: ‘You have to remember many Hispanics here have fled from authoritarian regimes in South America and they see a lot of those qualities in Trump.

‘I’m from Chile and grew up and went to college under General Pinochet’s rule.

‘It’s worth pointing out though that some of them come from left wing regimes such as Hugo Chavez in Venezuela. So it can work the other way.’

On top of the explosion in Latinos, Texas has also seen a huge influx of people arriving from traditional Democrat states such as California and New York, with thousands of Americans flocking to growing cities such as Frisco, New Braunfels and McKinney in search of work and lower living costs.

Brandon Rottinghaus, a political science professor at the University of Houston, believes that the result on Tuesday is going to be as ‘tight as bark on a tree’.

He points out that the state’s population has also become younger, and therefore more progressive. There’s been a surge in college-educated white voters this year for example.

Rottinghaus tells me: ‘The salsa on the taco is a very unpopular incumbent and a bad economy from Covid fallout.’

Like most major cities, they’re shutting up shop here on Monday ahead of the election due to fears of civil unrest, but given the more relaxed atmosphere than where I’ve come from in the north east of America you wouldn’t know it.

Out on the sun-dappled streets, children in their meticulously prepared costumes are out trick or treating. Sports bars swell with revellers watching the local college football team Texas Longhorns take on Oklahoma State.

But the political mood around the city centre is very different to the one I encountered earlier in the suburbs. 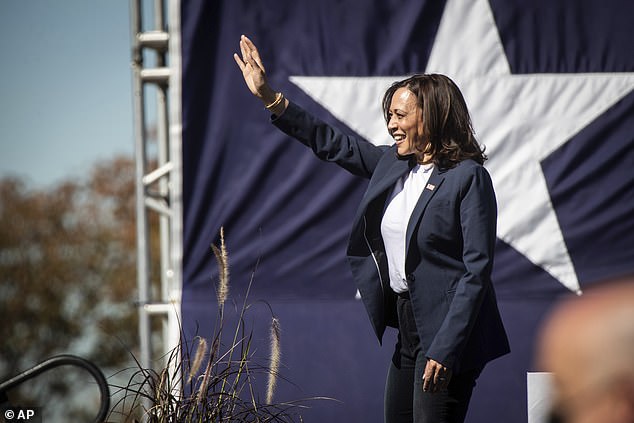 Such is the Democrats’ confidence about flipping it, Biden’s running mate Kamala Harris came to address an ecstatic Baptist church audience in nearby Fort Worth (pictured) on Friday to urge voters to turn Texas ‘blue’, writes HENRY DEEDES

All up and down Main Street, there are Biden/Harris stickers adorning pick-up trucks and station wagons.

At Wild Wild West, a cowboy outfitters directly opposite the city’s famous book depository where Lee Harvey Oswald fired those fateful bullets at John F Kennedy, tourists are kitting themselves out in boots, belt buckles and other John Wayne regalia.

I find the store’s owner Abel Bertaud in reflective mood.

Despite previously being a Republican, he’s already cast his vote for Biden.

‘We need someone who can get things going again,’ he tells me ruefully. ‘I don’t particularly care for Biden but he and Obama did an OK job after the mess George W Bush left following the financial crisis.’

Nodding towards Oswald’s infamous vantage point, he echoes a sentiment I’ve heard umpteen times this week: ‘I do think it’s pretty sad that in a country of 330million people there might be another JFK out there… yet we’re left to choose between these two.’

Whatever Texas’s fate come Tuesday, voter turnout is guaranteed to be huge.

Democrats are hoping that may be the result of a 16million dollar (£12million) TV advertising blitz here funded by New York media mogul Michael Bloomberg.

But if Republican bigwigs are sweating over the result they’re not showing it.

Luke Thwomby, a senior official in the Texas Republican Party, tells me: ‘Vice President Biden and Senator Harris have wasted valuable time down here. When the smoke clears on election day, we look forward to being in President Trump’s column.’