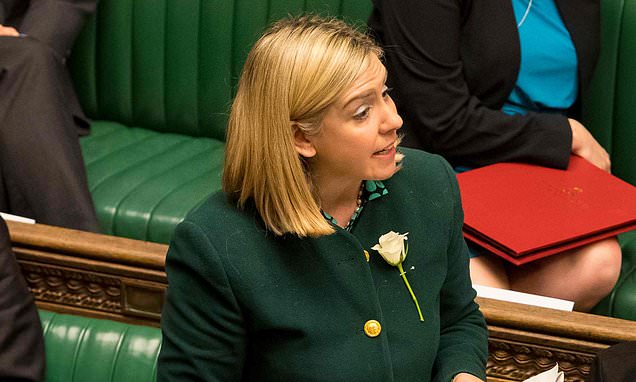 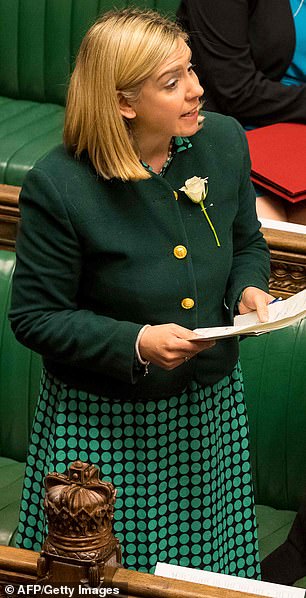 Andrea Jenkyns was dressed like the Green Giant yesterday but there was nothing jolly about her mood. The Tory MP for Morley and Outwood was fed up. Fed up with Brexit. Fed up with the Government’s woeful showing in the local elections. Fed up, in particular, with the Prime Minister.

Ms Jenkyns might bear the meek looks of a kindly village librarian but she vented her frustration with a broadside at her boss of such ferocity it provoked collective ‘oooooohs’ around the House. Even the pupils of slouching Gruffalo Boris Johnson narrowed at her acridity.

It came during a PMQs hitherto noteworthy only for its almost complete lack of noteworthiness. There was a brief moment of mirth when Scottish Nationalists’ leader Ian Blackford paid tribute to the royal birth, erroneously sending his congratulations to ‘the Duke and Duchess of Wessex’. Other than that, we glassy-eyed sketch writers were getting twitchy. Then half an hour in, the Speaker called upon Jenkyns.

She spoke in soft, slow tones. As is often the way of political assassins, she chose to plunge her dagger slowly and precisely.

‘Can I just say to my Right Honourable friend, the Prime Minister, she has tried her best,’ she said. ‘No one could doubt, or fault, her commitment or sense of duty.

‘But she has failed. She has to deliver on her promises…’

It was as if someone had run their claws down a chalkboard. Suddenly everyone in the chamber ceased chattering as Jenkyns continued: ‘We have lost 1,300 hard-working councillors, and sadly the public no longer trust her to run the Brexit negotiations. 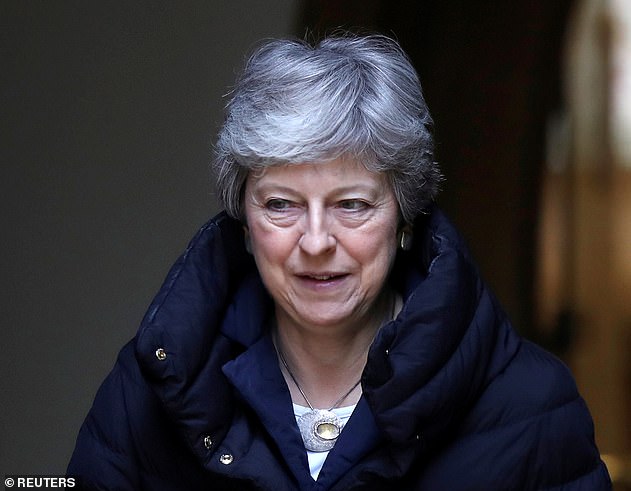 Miss Jenkyns is fed up with the Government’s woeful showing in the local elections. Fed up, in particular, with the Prime Minister

Is it not time to step aside and let someone new lead our party, our country and the negotiations?’

The demand caught Mrs May unawares. For a moment she appeared as bewildered as one of Barcelona’s footballers during their previous night’s drubbing in Liverpool. Her response, it should be said, was not wholly satisfactory. ‘This is not about me,’ she said, ignoring the issue of her departure date.

Jenkyns shook her head despondently. It was noticeable how there was scant rallying to the PM from her front-bench colleagues.

Work and Pensions Secretary Amber Rudd briefly flashed Jenkyns the stink eye. Otherwise, most of them just shuffled their hooves awkwardly. International Development Secretary Rory Stewart conveniently found something interesting to stare at on the ceiling.

Jeremy Corbyn, meanwhile, remained sphinx-like, barely moving a muscle. But then he didn’t really need to. The Tories were now doing all the damage for him.

He had used his questions to attack the PM on the NHS. He suggested she seek tips from Liverpool manager Jurgen Klopp about getting us a good result in Europe.

Mrs May responded with a pre-written gag about Liverpool’s victory showing how success can be achieved when everyone pulls together. This was probably her best moment. Julian Lewis (Con – New Forest East) defended Gavin Williamson, sacked by Mrs May over the Huawei leak.

Lewis said we should be grateful to people such as the ex-defence secretary who oppose the awarding of government contracts to the Chinese.

Williamson, incidentally, had taken up position in almost the exact perch from where Geoffrey Howe delivered his resignation speech that did for Margaret Thatcher’s premiership. It could have been a coincidence, of course. Or Gav could simply have fancied a chinwag with matronly Heather Wheeler, who was sitting there. But I doubt it.

Mrs May tetchily murmured something about how the Armed Forces still need to learn a thing or two about equality.

Before the end, I noticed Jenkyns checking her phone before turning and flashing one of her colleagues a broad smile. A WhatsApp message saying ‘nice one’ would be my guess. I’ve a hunch she will have received a few more of those before the day was out.