On Friday, the season finale of the psychological thriller Surface will air on Apple TV+. The series stars Gugu Mbatha-Raw as Sophie, a woman who must reconstruct her identity as she struggles to make sense of her life after a tragic accident left her with memory loss.

Mbatha-Raw is an executive producer of the show which was written and created by Veronica West and produced by Apple Studios and Hello Sunshine. Here we talk with the actress about starring in woman-led projects, how streaming series stretch her acting muscle, and the parallels between her character’s life and our post-pandemic world.

When did you first hear about this series and what personally drew you to the script?

Mbatha-Raw: I read the first episode, that was all available initially, and I just loved the style of the writing, the mystery of Sophie, the fact that it was from her point of view, but her not knowing anything about her. The fact that she didn’t know anything about her own life, I thought was a really intriguing setup for the show. And of course Hello Sunshine, knowing that they were attached to produce it. Having worked with them on The Morning Show, I had such a great experience on that show and with that character. So, it felt like there was a bit of a shorthand there with them as well, which made it really exciting. 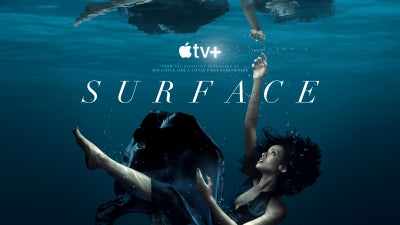 Sophie, is the one who’s been through so much trauma but she also of seems to be the strongest one in terms of being able to handle her circumstances. What’s your characterization of her?

Mbatha-Raw: Well, I guess that’s sort of for audiences to enjoy as they watch the show, because initially she’s somebody who doesn’t really have a full sense of her identity because of the memory loss from the accident. She’s looking to her husband and her friends to define her. So in some ways she’s somewhat of a blank slate, in terms of a character and a personality initially. But I think once she meets Baden, Stephan James‘s character, she sort of becomes increasingly intrigued about the truth of her life, and what happened on the boat that day. And I think that her determination and her sense of autonomy grows throughout the show, as she’s trying to put the pieces together of not only who she is, but who she was before and, really, what she was capable of.

This is a show where so many small pieces are being put together that you really have to watch intently. And as an actress, it’s not just your dialogue but your facial reactions that really tell what Sophie is feeling and thinking. What was it like for you preparing for scenes and embodying Sophie?

Mbatha-Raw: It was interesting because obviously we made the show in the time of COVID, so there wasn’t a great deal of opportunity for rehearsals and obviously television is quite fast paced, but a lot was happening on zoom. And I think fortunately for me, I had the privilege of being involved at a very early stage as an executive producer, being on board as the scripts were being written, as the story was being developed, because that gave me a chance to really get a sense of ownership of Sophie’s journey at a much earlier stage than you would normally as an actor coming on board. And especially, I’d come straight from working on The Girl Before, another project in the UK. And again, everything being on Zoom, we did table reads on Zoom even though we were all in the same town.

This phenomenal cast that I’ve got to work with, it really was a treat. I think being surrounded by great actors makes you better. And actors that I’ve really looked up to for a long time, like Marianne Jean-Baptiste, as well as Stephan James and Oliver Jackson-Cohen, predominantly who I have the bulk of my scenes with. And Ari Graynor as well, of course. But I think when you’re working with rich material, and Veronica West has written such tense scenes, a lot of the time what’s going on in the scenes is all about what’s between the words, what’s not being said. And I think that’s a real treat to play that kind of tension because there’s so many secrets between people that always gives you more than one layer to play, which I really relish. I think it makes it more satisfying as an actor. And like you say, as an audience member, more complex to absorb because you are really interpreting. It’s not just broad brush strokes and going into quite a lot of nuance and detail in terms of all of the relationships and what everybody has at stake. 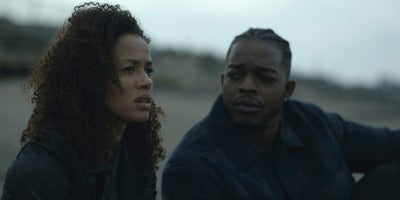 There’s such an interesting dynamic between Sophie and her therapist played by Marianne Jean-Baptiste. What was it like working with her?

Mbatha-Raw: Oh, Marianne is so wonderful. It’s so fascinating because obviously she’s British, she’s lived and worked in America for a long time, but we actually went to the same drama school, at completely different times. She went to RADA, and she just has such a warmth, but also such a power. She brings such a gravitas, and the energy of Hannah, the therapist, is such a complex character in many ways. I mean, I was greedy because I was essentially the only person that got to have scenes with her. So nobody else got to really share her on the screen.

But that was kind of great because I think the therapy scenes for me, they’re very different tonally to all the other scenes in a way, because they’re the only scenes that we have where Sophie seemingly is being completely honest with her thought process. She’s not in trying to interpret the relationship. She’s being very transparent about her frustrations, and her feelings, and her desires. As opposed to with her husband or with the other relationships, where there’s a slightly more eggshell quality to the way that she’s trying to feel her way into these intimate relationships. As opposed to, although it’s intimate in a different way, but the more professional relationship with a therapist, she can be a little bit more open. And Marianne, as I say, is just such a seasoned actor. Again, being in the presence of somebody with that level of experience, not just as an actor, but just life experience, and just such a generous spirit, it makes you better and it makes you lean into feel really supported and challenged in working with her. 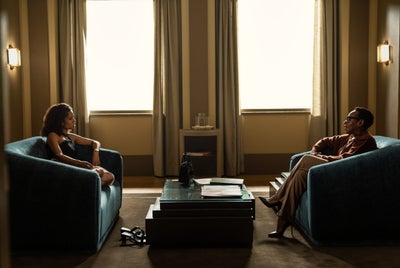 Being an executive producer on this project and working with Reese Witherspoon and Hello Sunshine, how unique of an experience has this been for you in terms of the amount of women who are a part of this project?

Mbatha-Raw: I’m no stranger to working in female centric projects. I have to say, I feel very fortunate that most of the projects that I’ve had the meatiest role have had strong female leadership behind the camera as well. So for me, it’s kind of become the norm. I know perhaps it’s not the norm in the industry at large, but certainly in the projects that I’ve been not just fortunate, but have sought out, I think that has been really a great part of the process of working with great female cinematographers like Tami Reiker, who I actually worked with on Beyond the Lights several years ago, and Claudine Salvé. That’s the first time I’ve worked with two female cinematographers on a TV series. Again, which has just been wonderful.

I think it’s not just about the storytelling, but also the gaze, the point of view. Jennifer Morrison, amazing actress and now director, she directs episode seven episodes of the show, which has been great. And of course Veronica West, who’s genius brain the whole story came from, as our main writer and showrunner. So for me, as I say, it’s really thankfully becoming the norm.

Has playing Sophie made you think about your own life in any way?

Mbatha-Raw: Maybe not directly, because obviously I’m not in Sophie’s position of having lost my memory or been through that kind of experience. So I can’t relate to it in that level, but I guess I will say as we are emerging from the pandemic, in some ways there is a shift for a lot of people in terms of their relationships, in terms of maybe limiting your time with more toxic people, or figuring out what you need. And I think there are elements of that in Sophie’s life, as she’s kind of got this fresh start. And I think maybe for many people, the pandemic has been a wakeup call, or a fresh start, in terms of shifts in our lives. So I would say maybe I relate to it on that level. That’s probably more metaphorical than literal as thankfully I’m not dealing with memory loss myself.

Are you looking forward to doing more TV series as streaming platforms continue to create more opportunities for storytelling?

Mbatha-Raw: I think for me, I just want to do good work. Certainly the way that the industry has shifted with platforms like Apple TV+, it really feels like it’s quality over quantity in terms of the shows. You don’t feel oversaturated with what you are getting to watch, and you can really feel like you’re getting to spend quality eight hours with a character going in depth which, for me, I love movies and I love going to the cinema, but obviously none of us have been to the cinema as much over the last few years. And although that’s been sort of disappointing on the one level, I think one way to look at it is that it has meant that you can take television really, and streaming has now in some ways overtaken film in terms of being more accessible to people, and that you can really spend time as an actor with these characters and go deeper with them. You haven’t just got 90 minutes with these characters, you’ve got full eight hours, which again just means you’re stretching different muscles.

It’s more of a marathon than a sprint, that’s for sure. So it takes a different kind of stamina, but I think if you’ve got a cool, complex character to play, that can actually be really enriching. I think there’s nothing worse than feeling like you’ve got a really meaty character, but you haven’t been able to get as much out of it as you could. So I think that’s one of the benefits of streaming is just more time to get your teeth into those roles.