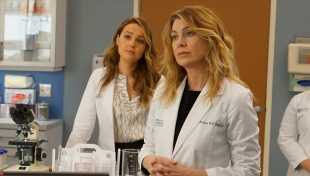 Someone uttered three very important words during the May 2 episode of ‘Grey’s Anatomy’ — but did they get an ‘I love you’ back?

The May 2 episode of Grey’s Anatomy was titled “What I Did For Love”, so just about every character jumped leaps and bounds to show their significant other just how much they care about them. And for DeLuca, that meant telling Meredith that he loves her. The major admission came after Meredith committed insurance fraud to save a little girl, whose father was seeking asylum. Following the surgery, Meredith thought DeLuca was going to reprimand her for making such a foolish decision, but instead, he told her how in “awe” he was of her. “You got me all wrong,” he said. “I’m in awe of what you did today.” And the reason why he didn’t tell her soon was because: “I was afraid that if I opened my mouth, the only thing that was gonna come out was… I love you.” But instead of saying it back, Meredith just said, “Oh. Glad we cleared that up” before rushing away.

Our recap is developing…