Plans to build a new Australian vaccine facility will be launched on Friday in a call for bids that puts global companies like CSL and Moderna in the running to develop a stronger domestic capacity against viruses.

Companies will have the next eight weeks to prepare their plans to manufacture vaccines in Australia based on the messenger RNA science underpinning products from Pfizer and Moderna. 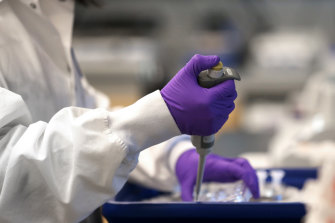 Moderna is in the box seat to pitch mRNA vaccine production facilities in Australia.Credit:Getty

Industry Minister Christian Porter is expected to launch the “approach to market” with a proposal to back the development from a $1.5 billion manufacturing fund.

The push to get mRNA vaccines in Australia comes after a rare blood-clotting side effect from the AstraZeneca vaccine led health authorities to recommend it be used only for people over 50 years old. The AstraZeneca dose is an adenovirus-based vaccine, whereas the Pfizer and Moderna products use the new mRNA method.

But the government faces significant obstacles when other countries are competing to attract vaccine developers and Singapore has secured a pledge from Pfizer to build an mRNA facility in the city state.

Moderna has signalled its interest in using Australia as the base to expand its manufacturing outside its home country, the United States, while CSL is also exploring whether it moves into the new field of vaccine development.

Mr Porter said mRNA was extremely promising and already being examined by Australian business and researchers.

“However, our market analysis also shows there are gaps and challenges to scale-up, which mean it’s not currently possible to commercially manufacture mRNA treatments locally,” he said.

The aim of the “approach to market” is to seek views from potential developers about their capabilities and what they would need from the government, including funding.

While Australia has struggled at times to bring large-scale pharmaceutical manufacturing to the country, CSL announced last year it would invest $800 million on a new plant near Melbourne Airport.

The plant will be run by CSL’s subsidiary, Seqirus, to make influenza vaccine and anti-venom for snake and spider bites, as well as a vaccine for an animal virus called Q-fever.

CSL has also spent $230 million on its Broadmeadows plant to make albumin for plasma as well as scaling up its Parkville operations in Melbourne to make the AstraZeneca vaccine for COVID-19.

The company took several months to develop the AstraZeneca capacity and has increased production to about 1 million doses each week.

The Pfizer and Moderna model, using messenger ribonucleic acid, or mRNA, was largely untested before the pandemic but is seen as a powerful option against COVID-19 and future coronaviruses because it requires only weeks to adjust the vaccine for new variants.

The vice-president for pandemic readiness at Sequirus, Lorna Meldrum, said the company was actively looking at options with mRNA.

“Vaccine manufacturing is a highly specialised industry – Australia is lucky to be one of the shortlist of countries with onshore capacity during COVID-19 and CSL is well placed to be part of the future,” Dr Meldrum said.

“Advanced manufacturing facilities require a highly skilled workforce. It’s not possible to just stand that up overnight and turn it on and off like a tap.

“People need to be trained and match fit so that there is a high level of expertise in the workforce to pivot and respond as the virus landscape changes.”

The company said it was “early days” since the government announced the mRNA plan in the May 11 budget but it would participate in the approach to market.