A scheme to recover water from farmers to benefit the environment under the $12 billion Murray Darling Basin Plan has been abandoned, as the Morrison government says communities cannot sustain the economic impact of reduced irrigation activity.

However, the Commonwealth’s former manager of environmental water has accused the government of caving to pressure from farm groups and experts warn the Morrison government’s alternate water-saving policy may not return enough water to the river to restore its health. 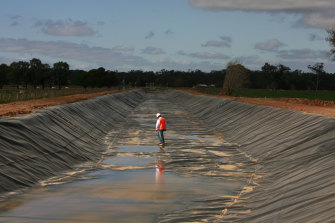 The Water Efficiency Program was designed to recover water through voluntary on-farm projects like lining irrigation channels, like this one near Shepparton.Credit:Michael Clayton-Jones

The Howard government launched the Murray Darling Basin Plan scheme to restore river health by recovering 3200 gigalitres principally from farmers, who through historical government decisions had been over-allocated unsustainable volumes of water for irrigation.

Federal Water Minister Keith Pitt on Wednesday axed the $1.5 billion Water Efficiency Program, which was designed to recover up to 450 gigalitres through voluntary on-farm projects like lining irrigation channels or funding efficient irrigation systems, and to share the savings between farmers and the environment.

Mr Pitt said irrigation towns cannot sustain any further loss of water from farmers. He remains committed to recovering the 450 gigalitres but said he would only recover water from off-farm sources by upgrading infrastructure like pipelines and harvesting stormwater.

“Off-farm water recovery means we can actually progress our river health targets and, unlike on-farm programs we do not reduce water availability in the consumptive pool,” Mr Pitt said.

The Water Efficiency Program has only recovered 0.04 per cent of its 450 gigalitre target. Progress on approving project proposals has been slow, due in part to conditions imposed on the scheme in 2019 that stipulate any on-farm efficiency scheme must be able to demonstrate it would have a neutral or positive impact on the local economy.

Former Commonwealth Environment Water Holder David Papps said there was no evidence the water recovery required is available through off-farm sources and accused the government of caving to the demands of some farm groups.

“The government needs to find some backbone and buy the water from farmers,” Mr Papps said. “I know there are still plenty of willing sellers, this is pure ideology from the government.”

Mr Papps said there “was too much water” in the consumptive pool and the only path to significant environmental gains is to reduce irrigation entitlements.

National Irrigators Council chairman Isaac Jeffrey praised the move away from on-farm recovery, arguing it meant farmers “can plan for the years ahead without the additional threat of water being removed from production”.

Professor Jamie Pittock from the ANU Fenner School of Environment said he welcomed Mr Pitt’s commitment to recover all of the 450 gigalitres, but warned the “devil is in the detail” on the alternate savings.

The government has compiled a list of provisional off-farm projects, which Professor Pittock labelled a “bizarre grab bag”; ranging from productive measures such as piping open stock and domestic channels to those with more questionable benefits including stormwater harvesting and upgrading bridges.

“It’s very unclear from what’s on the list how much water can be saved, at what cost, and if it will all add up to 450 gigalitres,” he said.