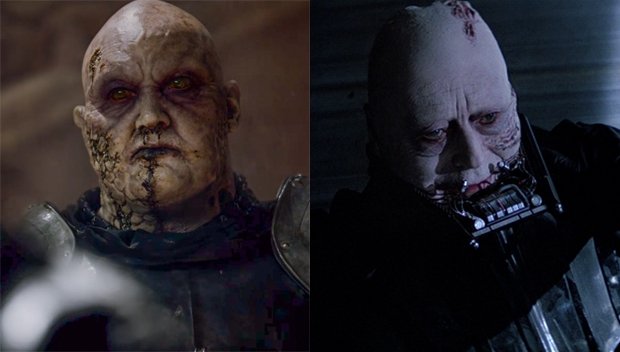 When The Mountain was unmasked during Cleganebowl on the May 12 episode of ‘Game of Thrones,’ fans noticed that the unmasked Mountain looked very similar to Darth Vader in ‘Return of the Jedi.’

Gregor “The Mountain” Clegane has been hiding under that helmet ever since he was brought back from the dead as a zombified version of himself by Qyburn in season 5. During the May 12 episode, fans got to see The Mountain’s face up close during his showdown with The Hound, a.k.a. Cleganebowl. Sandor “The Hound” Clegane knocked his brother’s helmet off during their fight, revealing his gross face underneath. Fans began pointing out that The Mountain’s look, including his pale face and purple eyes, was almost identical to Darth Vader in the 1983 movie Star Wars: Return of the Jedi. Both The Mountain and Darth Vader had epic unmasking moments.

The Mountain and Darth Vader’s true faces do look strangely similar. One fan tweeted: “I’m not saying Darth Vader and The Mountain are the same person. I’m just saying I’ve never seen both of them in the same room #BattleOfKingsLanding.” Another fan wrote, “They made the mountain look like buff Darth Vader and I kinda dug that.”

The season 6 finale is the only other time we saw The Mountain’s face underneath his helmet, but it was too dark to fully see what he truly looked like. Now we know. It wasn’t pretty, to say the least.

The Mountain went head-to-head with his brother in the highly-anticipated Cleganebowl. As King’s Landing was being destroyed around them, the Clegane brothers fought one another. The Hound has hated his brother ever since they were children when The Mountain thrust The Hound’s face into burning coals, causing him to have horrific facial scars. Even though The Hound stabbed The Mountain multiple times during Cleganebowl, including right in the eye, The Mountain just wouldn’t die. The Hound conquered his fear of fire in order to kill his brother, tackling The Mountain and throwing them both out of the Red Keep and into the flames below. The series finale of Game of Thrones will air May 19 at 9 p.m. on HBO.