Along the wall stood the still-padlocked cupboards used to hide two draft resisters during last year’s siege of Melbourne University by Commonwealth Police. 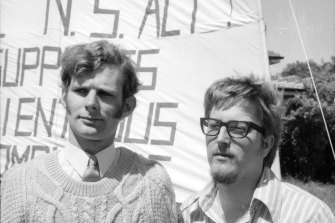 Beneath the honour roll listing Robert. G. Menzies as president of the Students’ Representative Council, 1916-17, and Ivor Greenwood, 1948-49, three people kept a lookout on the window and door. A Labor candidate for the House of Representatives was giving an interview at Melbourne University yesterday behind bolted doors.

Like Neil McLean, the next president to go on the honour roll, 22-year-old school teacher-candidate Barry Johnston is a draft resister.

He said he was sincere about his campaign for the seat of Hotham, held by the Minister for Customs (Mr. Chipp) and rejected any suggestion that he will be gagged or that someone else will speak for him.

“I am in close contact with George Crawford, the State chairman, and he keeps me in close touch with things as far as organising is concerned,” he said. “I don’t really think that I’m at much of a disadvantage in the campaign — I still meet regularly with my supporters in the local area.”

He doesn’t see himself as an embarrassment to the A.L.P., pointing out that the party’s policy opposes conscription.

Next month he plans to risk arrest by appearing at a public meeting at Moorabbin town hall.

“I had one close call when a police car stopped outside the place where I was staying… we vaulted a few back fences and I ran about three-quarters of a mile to another place.

“My campaign will go on, ever if I am arrested. My parents would campaign on my behalf.”

Barry Johnston was unsuccessful in his bid to win Hotham, losing to Don Chipp of the Liberal party. The ALP under Gough Whitlam, however, defeated the incumbent Coalition government. Soon after, the new Labor government announced the end of military conscription.