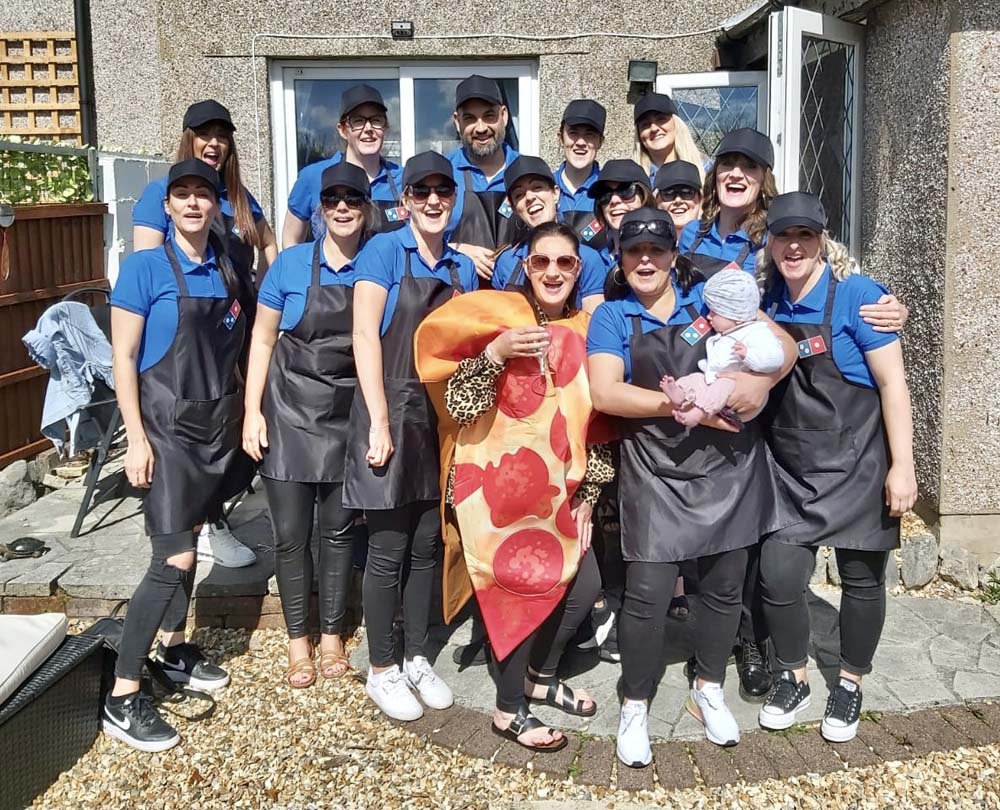 But do you love a margherita as much as Helen Longden, who marked her 40th birthday with a full Domino’s-themed party?

The group had previously had to cancel two planned foreign trips – as well as most of them catching Covid. When they realised pal Helen Longden turned 40 in May, they seized the chance to celebrate.

From a pizza illusion cake to a margherita slice costume for the birthday girl to wear, the women working at Lancaster Royal Infirmary decided to base the whole day on Helen’s favourite food.

The guests even wore homemade Domino’s uniforms to show their love for their friend and her takeaway of choice.

Although Helen’s birthday was May 1, they planned the bash for May 22 – the first weekend when bigger groups could meet – and gave the mum-of-one, of Galgate, Lancaster, who met her chums working at Lancaster Royal Infirmary, the shock of her life.

Taken to her workmate Vicky Squires’ house by her fiancé, postman Stephen Pollock, 29, Helen, who had her five-month-old baby Iris with her, said: ‘When I was told to cover my eyes, I was worried as I’d had my eyebrows tattooed and didn’t want the blindfold to rub off the scabs!

‘But when I opened them, it was hilarious as the theme was perfect. The pizza costume they got for me was actually comfortable and hid all my baby bulges, and it was nice and warm, although I’m not too sure pizza fashion will catch on.

‘I realised something might be up when I had to go there with a blindfold, but I had no idea it would be a party.’

Clinical Support Worker Jennie Tyson, 35, was one of the main conspirators behind the themed bash and said it had been even better as none of them had met Iris before, as Helen – who is on maternity leave – had been isolating.

She said: ’18 of us always get together to celebrate birthdays, hen parties and weddings and we go away once a year.

‘But last year’s trip to Spain was cancelled because of Covid, and this year’s May trip to Palma was cancelled, too.

‘Most of us work together and we all have at some stage, but while Helen was pregnant with her first child she didn’t want to take any chances, so she’s been isolating and we hadn’t seen her for over a year, or met Iris, who was born in December.’

There was one cake made to look like a pizza, another with a photo of Helen eating pizza on the icing, balloons shaped like pizza, a ‘Happy 40th birthday Helen’ banner with a pizza picture and laminated photos of the Italian dish on the fence.

There were snaps of the birthday girl munching through her favourite slices displayed around the garden and little cut-out pizza toppers on sticks to go in fairy cakes.

The idea was the brainchild of former A&E worker Lyndsey Rodmell, 34, now part of the hospital support staff, who ‘loves a themed party’

Explaining the Domino’s concept, she said: ‘Helen loves Domino’s pizza. She’s always ordering them at work and she eats them at home when she’s off.

‘When we were looking for photos of her eating pizza to stick around the garden there was no shortage.

‘But she always orders a boring margherita and sometimes, when she gets in an order to the hospital, we have it too, as it is quick and easy, especially on a night shift. And the hospital food is crap!’

Paying £25 per guest enabled the gang to get plain blue polo shirts, blue pinnies, and black hats on Amazon, as well as making their own three-dot red and blue badges, so they looked just like Domino’s staff.

Jennie laughed: ‘When the Domino’s delivery man arrived with our nine large pizzas, chicken strips and cookies, he got the shock of his life when we all ran round the corner looking like Domino’s staff, and he ran off terrified.

‘We had to run after him to get him back with our food order.’

She added: ‘The only person who went home early was Iris, with her dad.

‘After waiting for over a year to have a proper get together, everyone wanted a pizza the action!’