Scuttled two years running by pandemic lockdowns, Vivid will make a return to Sydney this winter, anchored by an eight-kilometre light walk.

The 2022 program for the light, music and ideas festival is to be unveiled Wednesday, with its first-ever theme, Soul of the City, and more than 200 events and artworks including 50 light installations, laser lights and 3D immersive experiences.

An extended light-show walk will bring festival visitors into the southern CBD towards Central Station for the first time. 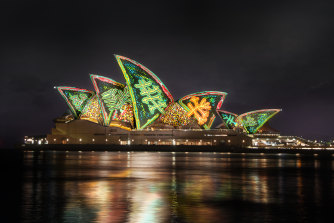 Yarrkalpa – Hunting Ground by the Martu Artists will light up the sails of the Sydney Opera House for 2022 Vivid Festival.Credit:Destination NSW

Vivid was last staged in Sydney in 2019, then attracting 2.4 million visitors, according to Destination NSW.

Festival director Gill Minervini has used the two-year layover to hit the reset button and broaden the festival’s appeal across all age groups, while spreading events more evenly across the CBD to avoid crowding of the foreshore.

With international travel back, Aaron Sorkin the creator of The West Wing and director of Being the Ricardos, and women’s rights advocate Gretchen Carlson will be among this year’s festival attendees, along with pop singer Troye Sivan.

Vivid’s Light Walk will extend from the Sydney Opera House to Central Station, for the first time, running along the Goods Line. Free outdoor concerts will be staged at points along the walk, among the 111 music events organised for the festival. Sydney Opera House and Carriageworks will curate their own concert line-ups.

The centrepiece of last year’s cancelled festival has been carried forward, with the sails of the Sydney Opera House to be lit with the work of eight female Indigenous artists from the Pilbara.

The looped 15-minute Opera House projection is inspired by the iconic artwork and voices of the Martu artists of the Sandy and Gibson deserts of Western Australia.

The bridge’s 90th birthday will also be marked by projections on its pylons.

Contingencies are in place in case of the reintroduction of pandemic-driven restrictions, but organisers believe they are in a much better place than last year with most of the population at least double vaccinated.

The festival is promising more artist-driven and Indigenous works, with the hope that the return of Vivid will send out a message of confidence. The festival’s overall arc was one of a “compelling story of creativity, innovation and technology, told through light, music and ideas, is distinguishably Sydney, yet authentically universal,” Ms Minervini said.

Vivid Sydney runs from May 27 to June 18, vividsydney.com.