Former Liberal minister for Indigenous Australians Ken Wyatt will push for a longer campaign for enshrining a Voice to Parliament rather than holding a referendum next year, saying there is a great deal of work to be done to build support for the proposal.

Wyatt, who has been appointed to an Indigenous working group to advise the Albanese government on its referendum strategy, said he believed the constitutional reform could be achieved during this term of parliament, but the national vote should be held after 2023 to ensure the best chance of success. 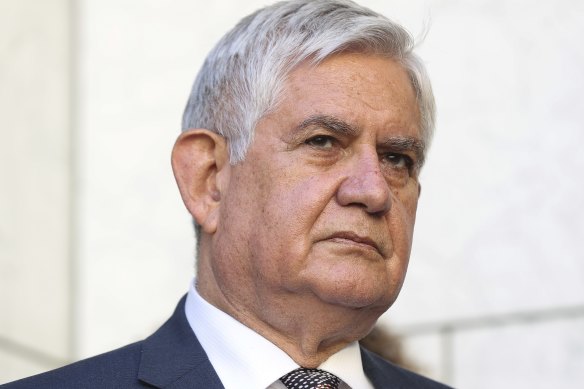 Former Liberal Indigenous Australians minister Ken Wyatt will push for a referendum on a Voice to Parliament to occur after 2023. Credit:Alex Ellinghausen

“The longer you do the work on the ground and with the broader Australian community, the better chance you have of winning,” he said.

“If you go too soon and lose it, it’s a question that will not be put again.”

“There’s a growing level of awareness that the Voice exists, but much more work has to be done on the ground with our own communities.”

Prime Minister Anthony Albanese has ruled out a referendum in the first half of next year, but has kept the door ajar for a vote in the second half of 2023.

Indigenous Australians Minister Linda Burney will, in a speech on Thursday, announce the creation of the 21-member working group of First Nations leaders as one of the key “next steps” on the pathway to the referendum.

The group, which will hold its first meeting in Canberra on Friday, has been tasked with providing advice over the coming months on key strategic questions, including the best timing for a successful vote and how the proposed constitutional amendment and question could be refined.

It will be co-chaired by Burney and Labor senator Pat Dodson and will comprise prominent Indigenous Australians from across the country, including Noel Pearson, Pat Turner, and Uluru Dialogue co-chairs Pat Anderson and UNSW Professor Megan Davis. Marcia Langton and Tom Calma, who produced a report for the Morrison government on models for the Voice, are also members.

In a major speech to be delivered in Canberra on Thursday night, Burney will say “everyone has a part to play” in building broad consensus for the Voice, from sport clubs, schools and community groups to the business sector.

“Let’s be clear: government cannot lead this referendum. This will come from the grassroots, from communities because the Voice is a nation-building project,” she will say.

“We will need a united Yes campaign that captures the attention and the imagination of the Australian people.”

A second “referendum engagement group” will also be established at a later date, comprising representatives from land councils, local governments and community organisations, to advise on how best to build support for the Voice and engage with Indigenous communities.

The government faces a significant challenge in convincing the Coalition to back the referendum, amid growing concerns among conservative MPs about the legal consequences of enshrining the body in the Constitution.

Opposition Leader Peter Dutton told the mining industry on Wednesday the Voice could wield a veto power over their engagements with Indigenous communities and damage their business.

“We have no idea what it means for the mining sector,” he said in an address to the Minerals Council of Australia.

“We don’t know whether a Voice that doesn’t represent the elders that you negotiate with or that your agreement is with in a particular location … they might be usurped and [the Voice will] exercise a veto right. That would damage your employees, that would damage your business.”

Wyatt rejected Dutton’s remarks as “fear-mongering”, saying the Voice would not displace Native Title laws that would continue to require mining companies to negotiate with traditional owners.

“I’ve yet to come across an Aboriginal person or a Torres Strait Islander person who wants to usurp traditional owners. It’s disappointing that that’s been raised as an issue,” he said.

He also urged Aboriginal leaders who were critical of the Voice to consider the impact of an unsuccessful vote.

“If we retain the status quo, are we going to be having the same debates about closing the gap areas, as we’ve had for the last 20 years? It’s time that we stood aside from our own personal vested interests and looked at what are the opportunities we can create by having a Voice,” he said.