Australian authorities have had a “myopic” focus on Islamist extremism since 9/11, experts have lamented, warning that it has come at the expense of identifying the rise of far-right extremism.

A Victorian parliamentary inquiry is investigating right-wing nationalism, including how the COVID-19 pandemic accelerated the movement and acted as a breeding ground for recruitment. The hearings, which kicked off on Tuesday, were told that children as young as 10 were being radicalised by neo-Nazis. 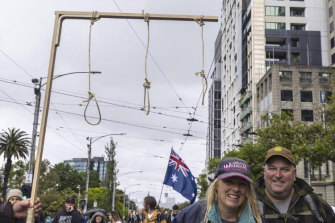 Gallows at a ‘freedom’ rally in Melbourne last yearCredit:Twitter

Liberty Victoria president Michael Stanton said that while the threat of far-right extremism was real and needed to be addressed, but his organisation was concerned about encroaching on broader society’s human rights and civil liberties in a bid to combat extremism.

“We need to make sure that in responding to those confronting scenes in the Grampians, whether it be Nazi salutes, displays of the swastika or the erection of gallows outside parliament, that we do not have a legislative response that throws the baby out with the bathwater,” he said.

“Sometimes that involves tolerating speech that we find offensive or humiliating.”

Stanton also said that while Islamist extremism continued to pose a threat, Australian authorities’ single-minded focus on it since 9/11 had paved the way for right-wing nationalism to fester undetected.

“There has been a myopic focus on Islamist extremism over the past 20 years in Australia at the cost, in our view, of focusing on other areas, including the emergence of far-right or neo-Nazis and the danger they present to the community,” he said.

“The drivers [to far-right extremism] need to be addressed because as we’ve seen with movements of the alt-right, and as we’ve seen with only some of the people at the anti-COVID restriction rallies, there is a real presence and something needs to be done about it in a practical and pragmatic way.”

Stanton said restoring faith and trust in institutions, including the Parliament and media, were vital to combating extremism.

In 2020, the Australian Security Intelligence Organisation revealed far-right violent extremism made up to 40 per cent of its counter-terrorism caseload, up from 10-15 per cent before 2016. 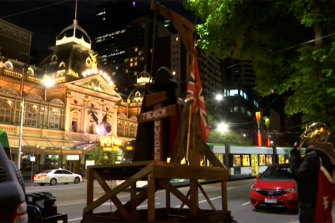 Gallows spotted at an anti-government rally in Melbourne last year.

Fronting the inquiry, The Age and The Sydney Morning Herald investigative journalist Nick McKenzie, who infiltrated the far-right National Socialist Network, said one of the biggest concerns of law enforcement was the rising number of children being radicalised.

“The NSN is dedicated to recruiting young, impressionable Victorians and is having some success in doing so,” McKenzie said.

“Minors are a very, very hard for police and other authorities, but they do present an opportunity for early interdiction. It’s a job for school, parents, and not just security agencies … They may not say it publicly right now, but Victoria Police is overwhelmed with the level of threatening language on the internet from Victoria, especially young Victorians.

“It’s a fact that police are prioritising threats against politicians, which you know are growing, but it means there’s a big cohort of young people who are conducting themselves online or making threats that do not cross a clear legal or police line, but still indicate they are on a path to radicalisation.”

McKenzie said children as young as 10 were being radicalised, and de-radicalisation programs in prisons and schools were not working. He said they were viewed as a “joke to be studied and exploited” by the NSN, which he described as “sloppily organised”.

“Just because they’re – if I can use the term – idiots does not make them less dangerous,” he said.

The Victorian Greens secured the support of the Andrews government for a parliamentary inquiry into the rise of far-right extremism following The Age and The Sydney Morning Heraldinvestigations and anti-pandemic restriction protests that were infiltrated by neo-Nazis.

It will report back to parliament by August, and the government will be given six months to respond.