The scheme announced by the Coalition – and matched by Labor – to help first-home buyers into the market who have only a 5 per cent deposit, risks leaving homeowners vulnerable to "negative equity," where a property is worth less than its mortgage, experts say.

There is still only the barest outline as to how it would work but the First Home Loan Deposit Scheme is limited to assisting up to 10,000 first timers of the more than 100,000 people who enter the property market for the first time each year. 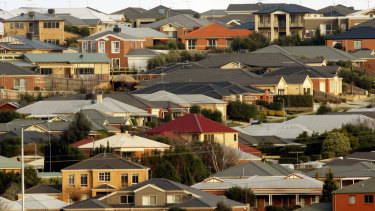 Government and Opposition want to help first time property buyers with a scheme that allows them to buy with only 5 per cent deposit.Credit:Paul Rovere

The maximum value of homes that can be purchased under the scheme will be determined on a regional basis, reflecting the different property markets across Australia.

Sally Tindall, research director of comparison site RateCity, says the scheme goes against the grain of what regulators have been telling lenders for the past four years – that they have to be careful about writing too many 95 per cent loan-to-valuation mortgages.

"Now you have the government and Labor saying to first-time buyers that it's alright to have a 5 per cent deposit," she says.

Kirsty Lamont, a director of comparison site Mozo, agrees, saying property prices in many parts of the country are expected to fall further and "those looking at buying with a deposit of 5 per cent are at real risks of going into negative equity".

Under the scheme, which would start from January 1, 2020, first-home buyers would not be required to save for a full 20 per cent deposit that is normally required by a lender to avoid paying lenders' mortgage insurance.

This is the insurance that reimburses a lender for any shortfall should a property be repossessed and sold for less than its outstanding mortgage debt. Though the insurance only benefits lenders, the one-off premium is paid by borrowers.

It can cost several thousands of dollars and is usually added to the overall loan, increasing repayments and reducing borrowing capacity.

Under the new scheme, first-time buyers would save the best part of the $10,000 that they would normally be up for on a $500,000 purchase with a 10 per cent deposit – that would be required by most lenders – on a mortgage paid off over 30 years.

The first-time buyer can stop renting and get into the property market but may actually end up being worse off under the scheme, she says.

With property prices in Sydney and Melbourne continuing to fall from their 2017 peaks, first-timers have time on their side to save for a bigger deposit, Tindall says.

The government said it would be talking to second-tier lenders and non-banks about the scheme, to help boost competition into mortgage lending.

Mozo's Lamont says apart from the risk of being in negative equity in a falling market, first timers using the scheme could also find themselves locked into a mortgage and unable to take advantage of a lower interest rate mortgage with another lender.

The scheme will likely be welcomed by parents who are worried about how their adult children are ever going to get a foot on the property ladder but are not so keen on becoming a guarantor for their offspring's mortgage.

If their son or daughter has to sell the house, maybe as a result of unemployment or a break up with partner, for example, and there is a shortfall in what is owed to the lender, as guarantors, they would be on the hook to service the loan.

"This scheme will likely take some of the pressure off the 'bank of mum and dad', but at the same time the scheme's effect in helping first-time buyers will likely be fairly marginal," says Shane Oliver, chief economist at AMP Capital.

"Compared to the grants that were available [to first-time buyers] at the time of the Global Financial Crisis, this scheme is pretty modest," he says.

Dr Oliver says it is more likely to be of interest to those first-time buyers who have been looking at getting into the market for some time.