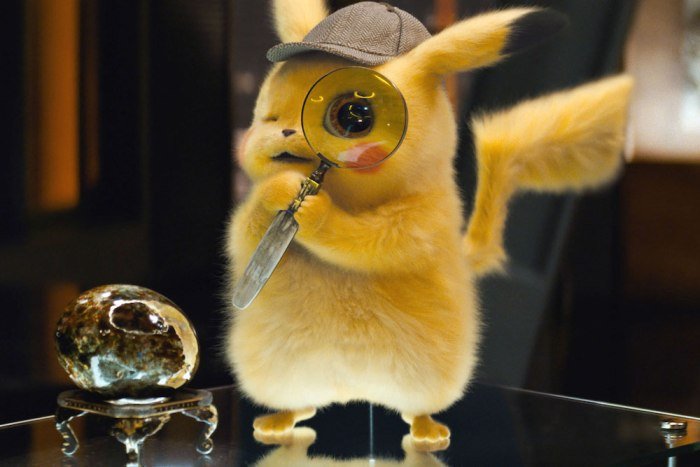 You don’t have to be a Pokémon aficionado to recognize that the arrival of the feature-length, live-action “Pokémon Detective Pikachu” movie represents a major turning point to the cult of Pokémon superfans: For those who grew up playing the video games, collecting the trading cards, or watching the Japanese anime series, this is the big-screen validation of a childhood crush — far from satisfied by the 21 feature-length cartoons to date — the way that a Michael Bay-directed “Transformers” movie or the Marvel Cinematic Universe cycle took the fantasy of what those properties represented to collectors and imagined how they might look in the real world.

So, while the cultural significance of “Detective Pikachu” is virtually self-evident, you do have to be fairly well invested in the Pokémon franchise to appreciate the result, which feels like Legendary Pictures’ half-baked attempt to get in on the massive popularity of the Pokémon phenomenon without necessarily understanding or respecting the underlying IP. Adapted from the “Detective Pikachu” video game — which happens to be the only Pokémon spinoff in which the title character can properly speak — this stand-alone Pokémon outing stunt-casts Ryan Reynolds as the Slip ’n Slide-yellow rodent with Bing cherry cheeks and a lightning-bolt tail.

Normally, Pokémon are limited to saying their own names, which Pikachu traditionally does in a kind of chirpy baby-talk that suggests a far more innocent personality than the relatively salty one Reynolds supplies here, performing a watered-down version of the wisecracking attitude he brought to the irreverent “Deadpool” movies — when seeing his live-action self interacting with a fluffy, non-talking Pokémon would’ve been infinitely more fun. Detective Pikachu, meanwhile, is incongruously adorable-looking, rendered with photoreal fur and a tiny Sherlock Holmes-style deerstalker cap (not so much worn as plopped atop his noggin the way Japanese rabbit — and early-2000s internet sensation — Oolong would balance mini-pancakes on his head).

The true protagonist here isn’t Detective Pikachu but a surly human teenager named Tim Goodman (Justice Smith, star of “The Get Down” on Netflix), who gets word that his estranged father, Harry, has disappeared — and presumably died, though no body was recovered — in a fiery car accident. Director Rob Letterman (a veteran of DreamWorks Animation who also helmed 2010’s effects-intensive “Gulliver’s Travels” movie) opens the film with a glimpse of the crash, which takes place near a heavily guarded research lab and involves Mewtwo, a genetically engineered version of one of the most powerful Pokémon, setting up the movie’s central mystery: What happened to Harry?

But the real enigma, which emerges the instant Tim enters his dad’s detective agency and hears Pikachu speak for the first time, is why this particular Pokémon can talk. And perhaps more importantly, why only Tim seems capable of understanding him. In any case, if Pikachu survived the car crash (as Harry’s partner, he was in the vehicle when it was blasted off a bridge), then Harry must still be out there too — although something’s playing tricks with Pikachu’s memory. Since these two can communicate, they might as well team up to solve the case, enlisting the help of Lucy Stevens (Kathryn Newton), a go-getter unpaid TV intern who fancies herself an investigative reporter.

Lucy, like everyone else in Ryme City — the gleaming, neon-lit city (like Tokyo, absent Asian people) where “Detective Pikachu” takes place — has a Pokémon partner of her own, a nervous yellow Psyduck who must be kept calm at all times, lest it unleash a dangerous blast. Psyduck’s temperament suggests a flaw in the design of Ryme City, which was conceived by a rich philanthropist and self-proclaimed “visionary icon” named Howard Clifford (Bill Nighy), who believes that humans and Pokémon were designed to live in harmony. This is a very different dynamic from the one found in nearly all other Pokémon properties, in which human trainers coach the super-charged creatures and unleash them in supervised battles.

“Detective Pikachu,” on the other hand, focuses more on exploring humans’ relationship with these exotic species. We learn that as a child, Tim dreamed of becoming a Pokémon trainer, but grew bitter toward the animals after his dad moved to the big city and started spending more of his time with Pokémon than with Tim (who now seems constantly irritable, angrily shouting rather than speaking nearly all his dialogue).

That dysfunctional family situation is mirrored in Howard Clifford, who could be the movie’s villain, although his son Roger (Chris Geere) makes a plausible candidate as well, since he seems similarly resentful of a father who never gave him enough attention. In any case, one of these two Cliffords appears to be responsible for the experiments on Mewtwo, and the development of a purple toxin called “R” that makes Pokémon aggressive — part of a larger plan that’s sure to jeopardize the harmony of Ryme City.

As Tim and Pikachu go about their early sleuthing, the movie does its best to channel a Sam Spade-style detective story, one whose film noir roots have been broadened to the radiant, full-color look of a Skittles commercial. The superficially utopian Ryme City comes across as one of those elaborate megalopolises, like Zootopia, where disparate species coexist because the filmmakers say they do, although “Detective Pikachu” puts very little effort into world-building, and therefore leaves many unanswered questions about how the dynamic actually works.

Following the clues, Tim and Pikachu wind up in a shadowy warehouse district where Pokémon battles still happen, and where Pikachu gets pulled into a rematch with a fire-breathing Charizard — a fun scene that suggests how the movie’s live-action look might work better on the old-fashioned collect-and-combat stories told in the cartoons. Though consistent with the game (with a few extra but obvious twists thrown in for good measure), the story of “Detective Pikachu” doesn’t allow nearly enough Pokémon-related action, while the quality of the computer animation (by Moving Picture Co. and Framestore) falls far short of the basic level of competency audiences have come to expect from effects movies.

Neither Pikachu nor any of the other Pokémon look as though they belong in the live-action environments. Rather, they seem to have been superimposed — a miscalculation of several factors, from lighting inconsistencies to unconvincing CG textures to the lack of care put into their virtual performances. What we can make out of Pikachu’s personality comes through Reynolds’ sardonic line readings, although most of the time, the furry yellow critter we see on-screen doesn’t look like it’s actually feeling the things it says.

In the end, if “Detective Pikachu” is going to make the case that each human is destined to pair with a single Pokémon — a kind of spirit-animal monogamy that contradicts the “Gotta catch ’em all” attitude that’s come before — then at least Tim and Pikachu should have some kind of chemistry. But Smith (who generally comes off sour and stressed out) isn’t anywhere near as affable as Ash Ketchum was in the cartoons, and the movie’s final reveal confuses what kind of relationship he’s supposed to have with Pikachu going forward.

Will their partnership continue? If anything, the blessing of “Detective Pikachu” is that it’s off-canon. Its box office should demonstrate fans’ hunger for a more robust big-screen version of the Pokémon universe, while the disappointment needn’t dissuade another team from coming along and doing it right.