Meghan Markle, Prince Harry, Kate Middleton and Prince William were once known as the ‘Fab Four’, however this powerful relationship began to show some cracks pretty early on. As Meghan and Harry were back in the UK this week, body language expert Judi James looked back to a tense moment of the formerly ‘Fab Four’ caught on camera.

The relationship between the Cambridges and Sussexes was visibly unravelling by February 2018, according to Judi, when the four spoke about the Royal Foundation.

However, it was Christmas of the same year where the “tense moment” was “caught on camera”.

On December 25, 2018, the two Princes and their wives walked to a Christmas Day church service at the Church of St Mary Magdalene on the Sandringham estate.

But they were far from happy families, according to the body language expert, from their gestures to the clothes they chose to wear. 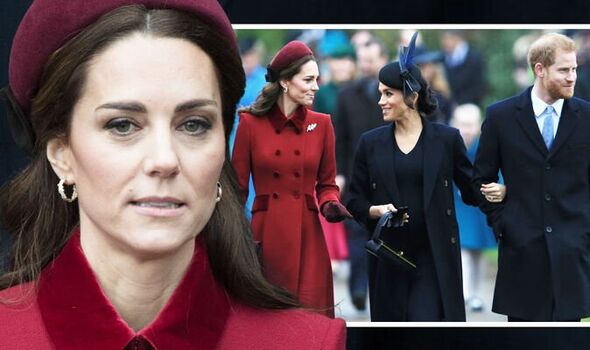 According to Judi, Meghan and Kate’s “military-style coats” reflected the “mood of the two couples”, and the burgeoning “fatal rift” between the four also peeked through the surface.

Judi told Express.co.uk: “This tense royal moment wasn’t just caught on camera, it was performed specifically for the cameras: one of the only examples of royals appearing to attempt to actively dispel rumours of a rift in living memory.

“The body language here works on two levels. On the surface we had the ideal projected performance, which was all about joy and goodwill to all men, even to one’s rather troublesome brother.”

Just like families across the country, “putting rifts and grievances aside” for Christmas Day, Kate, Meghan, Will and Harry were busy doing the same.

Judi continued: “The rumours of a rift between the Sussexes and the Cambridges had focused so far on the relationship between the two women.

“It was still hard to imagine the two brothers falling out so their body language signals were periphery in terms of attracting tension and speculation.

“Stereotypically, two beautiful women were seen as much more likely candidates and so it appears to have fallen on them to prove otherwise.”

It was up to the Duchesses to play happily families and create an aura of familial affection and ease. 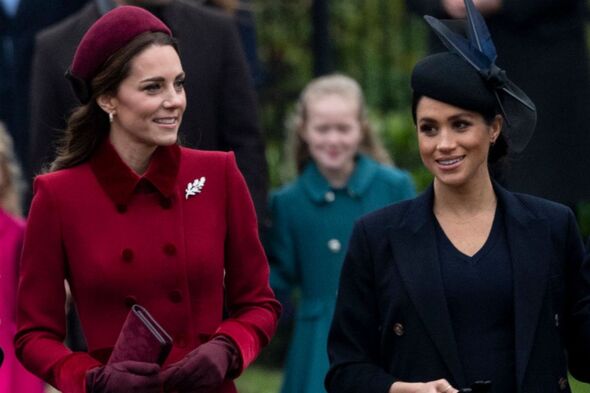 The two brothers, rather, displayed “obvious tension”, both walked with their hands “stuffed into their pockets in a gesture associated with a desire to hide”.

Admittedly, the weather was “chilly”, but “a royal budget should run to warm gloves”.

One thing that was particularly interesting was that both Prince’s mouths gave their inner feelings away – without saying a word – according to Judi.

The expert claimed: “They kept their gaze away from each other and William’s barely-there smile looked forced, with the corners of his mouth often pulling down rather than up.

“Harry often sucked his lips in, which was a gesture of sadness or regret that he used more frequently as the troubles unfolded over the next few months.” 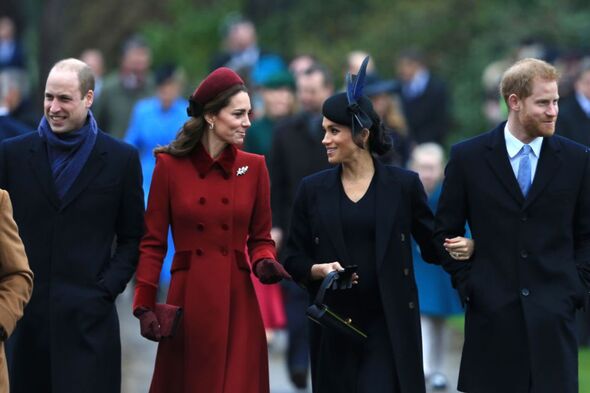 As for the two royal women, “Meghan had her hand looped into Harry’s arm and her right hand held her bag up in what looked like a barrier gesture between herself and Kate”.

It was Kate who ended up orchestrating some normality and ease, according to Judi, moving towards Meghan to “chat right in front of the cameras”.

However, there appeared to be more to this conversation than what meets the eye.

Judi concluded: “Meghan turned her head and smiled and Kate also smiled but as they chatted Kate appeared to have a subtle lower jaw jut and, like her husband, there was a pulling down of the corners of her mouth.

“If we take away the forced-looking mouth smiles the eye contact could be seen as quite challenging.”