Bryony Kimmings did a lot of crying when she was making her theatre piece I’m a Phoenix, Bitch. She still cries quite often during performances. ‘‘It’s nothing to do with sorrow for now,’’ she says. ‘‘It’s just so sad, what happened, and I don’t think it will ever not feel sad. But I don’t feel unsafe or anything.’’
We can feel safe with her too, she says reassuringly at the beginning of the show. She’s not going to crack up in front of us. ‘‘You need to see that, that I am completely all right.’’ And the crying now feels lovely, she says. ‘‘Exhausting for you, lovely for me. I love nailing it. I love being able to think ‘yes, that’s exactly what I want to say’.’’
In 2015, Kimmings gave birth to her son Frank. She was 35. Both she and her then partner Tim Grayburn were longing to have children and a proper family life. They moved into a cottage in the English countryside and doted on the new baby, even as their own relationship began to fray. Then Frank became sick – very sick – with a rare neurological condition that produced seizures. It was impossible, said his doctors, that he could go through such trauma without brain damage. Today, although his seizures are under control, the long-term impact of his illness is unclear.
Eventually, Kimmings buckled under the weight of worry, grief and her own underlying depression. The implosion of her mental health and unravelling of the domestic dream is the story told in I’m a Phoenix, Bitch. Which is, believe it or not, often very funny. 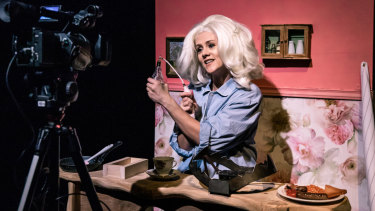 Kimmings’ first solo performance piece, made when she was 29, was called Sex Idiot. It drew on her real-life experience of discovering she had chlamydia and going to see her past sexual partners, ostensibly to warn them but also to see if she could find out who gave it to her. ‘‘The show is like little responses to what everyone said, basically. They would tell me if they had had chlamydia or not and I would make a piece of art from our relationship or about our sex, but the story going along was who the f— gave me chlamydia?’’
Subsequent shows such as 7 Day Drunk and A Date With The Night riffed on her own life; Fake it ‘til you Make it explored depression in men and was a collaboration with Frank’s father, who had suffered bouts of suicidal depression for more than a decade but successfully kept his affliction a secret. So it was perhaps inevitable that someone in the Twitterverse would come out with the sneering suggestion that Frank’s illness was obviously good material for a future Kimmings show.
‘‘We were in the middle of a tour,’’ she remembers. ‘‘Tim was in the show with me and Frank was on tour with us when he got ill. Someone tweeted ‘oh I can’t wait to see the show about this one LOL’. I was just so angry. People are mental on Twitter. I just was thinking ‘oh this is so painful, I would never make a show about this’.
‘‘But then once I’d sort of got a handle on the PTSD side of it and had settled a bit – I was just in chaos before that, drinking a lot, hating myself, wanting to kill myself – a couple of other friends spoke to me about their post-natal depression. And I was just like ‘we don’t talk about this at all’. And then I thought I had to make it. It took me a long time but then it was very, very therapeutic for me.’’

Someone tweeted ‘oh I can’t wait to see the show about this one LOL’. I was just so angry.

I’m a Phoenix, Bitch is unflaggingly energetic, even at its points of greatest intensity. Kimmings spent years doing cabaret nights in a club before she went solo, which means she honed her skills in clubs where drunk people threw bottles at anyone who was insufficiently entertaining. That kind of thing encourages a certain alertness to the audience. ‘‘When the audience is there and then you lose them, because they think ‘I can’t hack this any more’ or ‘this is a bit too self-indulgent’, I feel it. And if I feel it, then I say something.’’
So she begins as a self-deprecating ’50s housewife in a shiny blonde wig poking fun at her own neediness; there is the first of several funny songs written with Tom Parkinson. Starting at the top, she says, you have to make yourself the biggest clown in the room. ‘‘Make sure people like you; make sure people really care what you’re talking about, care about you, as much as possible by making them laugh.’’ 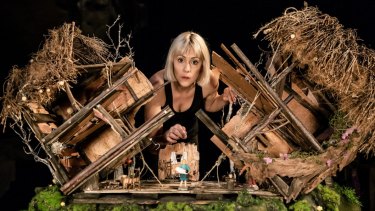 The cottage where Bryony Kimmings lived looks like a nightmare doll’s house in I’m a Phoenix, Bitch.

As the mood darkens, she is supported by tremendous stagecraft. The cottage where she lived by an intermittently rising river arrives onstage looking like a nightmare doll’s house. At the point in the narrative where she loses herself in madness, we get lost ourselves in a projected image of a tangled wood that seems to swallow everything else on stage. ‘‘And there is the point where you really cry or where you feel you can’t take it any more, that’s where a joke has got to be.’’
Looking back, Kimmings thinks she was heading for the precipice well before she had Frank. She had always wanted children; part of her initial attraction to Grayburn was that he did too. She discovered she was pregnant during the Australian tour of Fake it ‘til you Make it. They were in Adelaide. 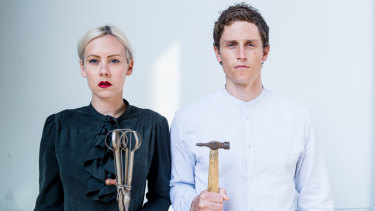 Bryony Kimmings and Tim Grayburn in Fake it ’til you Make it. Credit:Sarah Walker

‘‘Tim remembers that I sat on the tram going to the beach and then all day there listening to music and looked really, really sad. He was really happy. And I think it was from that moment on. I wasn’t sad I was having a baby, because I was really connected to Frank the whole time and I loved being pregnant. But I don’t like being out of control and I didn’t know what it was going to be like. And I was like ‘I don’t know if I’m going to be any good at this’.’’
Nobody does, of course, but the fear caught her unawares. This wasn’t what she expected to feel; it certainly wasn’t what the bloom of pregnancy was supposed to be like. ‘‘I think I had pre-natal depression,’’ she says. ‘‘Because it’s so huge. This is the thing people don’t acknowledge, that it is actually massive, especially if you’re the sort of person who has lived a really full life and done all the things you wanted to do.’’
She was gung-ho, she says, ready to leap tall buildings in single bounds. ‘‘Young, basically. And also living my best life, you know, touring round, getting pissed. I was just suddenly like ‘who the f— am I now? I’m never going to be that person again!’ So you’ve got a grieving.’’
And she was supposed to be the sane one. She is certainly not oblivious to the irony: she was touring a show of her own devising about her partner’s depression and the importance of talking about it, while keeping schtum herself.
‘‘I think I did that classic co-dependent thing, which is to say ‘I’m fine and you’re unwell … I’m going to make a show and you’re going to be able to lose your job and I’m going to smother you with sort of mothering care and you’re going to feel completely emasculated and we’re never going to have a conversation about mental health properly’.’’ Not about hers, anyway.
Writing it down was part of her recovery. ‘‘The first drafts of this no one should ever see. I just sobbed in a room for about three months and was so angry and really needed to get rid of it all.’’
Gradually she found a way – in tandem with different kinds of therapy – to tell the story the way she always does, by writing down the events she wants to cover and asking what they say about her, about the audience and about the world at large. ‘‘I try to find some kind of context, at least in my head.’’
She tried to think of her character’s journey as a quest, a hero’s journey, even if nobody is fighting or winning or overcoming anything and it didn’t feel like one. ‘‘It’s just that you’ve been conditioned to think about the hero’s journey as men going off fighting and winning or overcoming something,’’ she says. ‘‘But that’s not how the world works. The truth is that you are also doing that by not topping yourself.’’
I'm a Phoenix, Bitch is at Arts Centre Melbourne, September 11-15, and QPAC Playhouse, Brisbane, September 18, 20 and 21. Lifeline: 13 11 14.