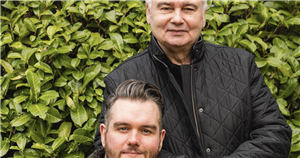 Eammon Holmes has announced that he has become a grandfather for the first time after his son Declan has welcomed a baby girl.

The This Morning presenter, 61, announced the heartwarming news on the ITV daytime show and told viewers: "My son Declan and his wife Jenny, they're the happy couple. Jenny gave birth to Amelia, who is 7lbs and 6 ounces.

"That's my first grandchild, my mother is a great grandmother."

Declan is the eldest son of the ITV presenter from his marriage to ex-wife Gabrielle Holmes. The pair, who also share children Niall and Rebecca, separated in 1994 and divorced in 2005.

The 32 year old is the founding director of drinks-led hospitality company, Nightcap Event Group, which he founded in 2013, and provides consultancy and mobile bar services across Northern Ireland.

Declan, who has a degree in Film Studies from Queen's University Belfast, is also the director of online content solutions company, Content88, which he has listed in his Instagram bio.

Declan first went Instagram official with Jenny in 2012 and posted a sweet selfie with of the happy couple to his 3,647 followers.

It comes after Eammon's wife Ruth Langsford questioned what he would like to be called in his new role as she said: "What are you going to be, gramps, grandad? Grumps we came with up, didn't we? But he didn't seem too keen on that one."

To which he responded: "It surprises me because people come up to me and say, 'He's too young to be a grandfather….'"

Eamonn, who recently couldn't believe Dr Zoe called her baby Lisbon Lion, continued: "I've got people getting in touch with me about glamorous grandad competitions and all kinds of things like that but my friend Bill has anointed himself Papa."

Eamonn then joked: "It's like the Pope, there's an infallibility that goes with it, so I'd quite like my grandchildren to call me Papa."

Fans flocked to Twitter to offer their congratulations on the happy news as one person wrote: "Huge congratulations to @EamonnHolmes @RuthieeL @thismorning on the birth of your granddaughter Amelia [purple heart emoji] I think you look like a “pops”, alongside crying with laughter emoji.

Another said: "Congrats to @EamonnHolmes in becoming Grandad to his son @decholmes and daughter-in-law Jenny in becoming parents. Look forward to seeing " Grandad Holmes " with his grandchild."

While a third added: "Congratulations Eamonn. You'll be an amazing papa".