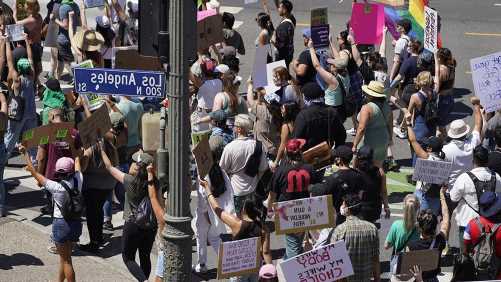 A group of prominent entertainment industry women gathered Saturday for a video conference call to discuss next steps in the reignited fight for reproductive rights in the wake of the Supreme Court’s decision to overturn Roe v. Wade.

The gathering was organized in part by Katie McGrath, a partner in Bad Robot who is married to superproducer J.J. Abrams, and the social impact strategy firm Acora Partners. The presentation was said to run about two hours. McGrath and Abrams have been vocal and active supporters of pro-choice movements

The discussion was said to have included a presentation from an ob-gyn and medical experts, and a presentation on the complex legalities around abortion triggered by the high court’s decision. With Roe going away, numerous states are triggering highly restrictive laws or outright legal bans on the procedure.

A source familiar with the conversation said the participants agreed to set up regular meetings to help guide collective action in response to the jolt brought by the end of Roe and the protections for a woman’s right to chose. Much of the conversation was focused on the immediate need to generate money, health resources and a network of services for women in states like Texas, Oklahoma, Missouri, Ohio, Kentucky, Louisiana, Mississippi, Wyoming and South Dakota where abortion is now outright illegal.

There was also discussion of the long-term need to organize and develop public policy campaigns to block any efforts to enact a federal nationwide ban on abortion. Moreover, alarm was shared over the prospect of opening up battles on more than one front, in light of Supreme Court Justice Clarence Thomas’ chilling reference in his concurring opinion to the need to revisit other decisions securing fundamental rights like same-sex marriage and access to contraception.