Dr. Leonard L. Bailey, who elicited both admiration and outrage by transplanting the heart of a baboon into a dying infant in 1984, died on May 12 at his home in Redlands, Calif. He was 76.

The cause was neck and throat cancer, his son Brooks said.

Although Dr. Bailey went on to pioneer human heart transplants for infants, and to build a renowned center for children’s cardiac surgery at Loma Linda University in Southern California, he remained best known to the public as the doctor behind the wrenching story of the infant known as Baby Fae.

Called Baby Fae at the time to protect her privacy, she was later identified as Stephanie Fae Beauclair. She was born in Barstow, Calif., on Oct. 14, 1984, with little more than half a heart. She had a fatal birth defect called hypoplastic left heart syndrome, in which the main pumping chamber of the heart does not develop. She was quickly transferred to Loma Linda.

At the time, babies with the condition lived only a few weeks, if that long. Surgery to try to repair the defect had poor results. Two infant heart transplants involving other patients had been tried at other hospitals, and failed. Donor hearts were vanishingly rare. A doctor told Stephanie’s mother, Teresa Beauclair, that she could keep her daughter in the hospital until the end, or take her home to die.

Ms. Beauclair decided to take Stephanie home to Barstow. The doctor gave her a card with the telephone number of the coroner to call when the time came. She was 24, with a 2½-year-old son, and had broken up with the children’s father two weeks before Stephanie’s birth.

Dr. Bailey had been away when Stephanie was admitted to Loma Linda, but when he returned, a colleague told him about her, thinking she might be eligible for a procedure that Dr. Bailey was studying: transplanting a heart from a young baboon into an infant. The hospital’s ethics board had given permission for five such operations. Dr. Bailey agreed that the colleague could call Ms. Beauclair about the surgery.

“I wondered if the doctor was a mad scientist,” Ms. Beauclair said in the 2009 documentary “Stephanie’s Heart: The Story of Baby Fae.” “But when you get down to it, it’s just an organ. A lifesaving organ.”

She, her mother and a friend bundled Stephanie up and drove 75 miles south to Loma Linda. They met with Dr. Bailey, and he stayed up all night with them in his office, answering their questions and explaining the years of cross-species research he had conducted, transplanting lamb hearts into baby goats. Stephanie’s father did not attend the meeting, but Ms. Beauclair recorded it for him, and they ultimately decided together to go ahead.

“I knew she was going to die, and I had to try,” Ms. Beauclair said in a telephone interview. “If I hadn’t tried, I always would have wondered, could we have saved her? Until you’re faced with that, you don’t know what you’ll do.”

Dr. Bailey emphasized that the operation would be highly experimental, and Ms. Beauclair said she had understood that the transplant might be rejected.

“But somebody has to be first somewhere at some point,” she said in the interview.

Dr. Bailey had six young baboons, and he conducted various tests to identify one with tissue that seemed most immunologically compatible with Stephanie’s. But the animals’ blood type did not match the infant’s — something that Dr. Bailey later called “a tactical error with catastrophic consequences.”

The operation took place on Oct. 26, 1984. At first, Stephanie seemed to thrive. During a news conference at the hospital, Dr. Bailey was ebullient, describing her as a “beautiful, healthy baby” whose transplanted heart was doing “everything it should.”

Baby Fae made headlines around the world. The public was enchanted by her. But reactions to the surgery ranged from awe to horror. 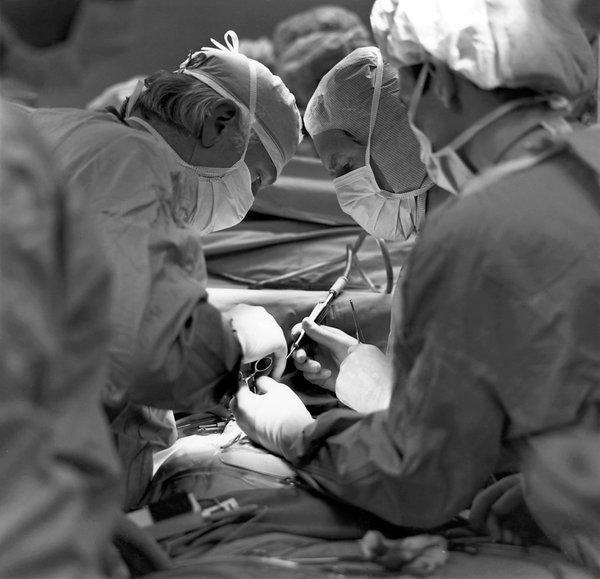 Some saw it as a courageous first step toward saving the lives of people with failing hearts. Others considered it reckless, asked why a human donor had not been sought and suggested that the baby’s parents had not understood what they were getting into and therefore had not given truly informed consent.

“I may have been young and naïve,” Ms. Beauclair said in the documentary, “but I wasn’t dumb.”

Animal rights groups said killing the baboon was immoral and held demonstrations outside the hospital and Dr. Bailey’s home. He and the hospital received threats.

“This wasn’t a wild whim,” Dr. Roger Hadley, dean of Loma Linda University School of Medicine, said in an interview. “He had worked for years on doing cross-species transplants in animals. We had a whole lab of animals who had somebody else’s heart.”

Dr. Hadley added that the hospital at Loma Linda is faith-based — the hospital and the university are run by the Seventh-day Adventist Church — and said that all its ethicists and theologians had thought that the transplant was the right thing to do.

By the time Baby Fae came along, it was abundantly clear that transplants could save lives, especially with the use of cyclosporine, a powerful anti-rejection drug that had recently become available. But organ donors were in short supply. Long before Baby Fae, a surgeon had transplanted a chimpanzee heart into a person; the transplant failed. Other surgeons had experimented with transplanting kidneys from chimpanzees into humans. The longest surviving recipient lived nine months, and was well enough to go back to work.

Stephanie’s initial rally after the surgery did not last. Rejection and organ failure set in, and she died on Nov. 15, 1984. She had survived for 21 days.

Her case helped focus concern on the plight of babies born with fatal heart defects, and the desperate need for organs. The next year, Dr. Bailey performed the first successful heart transplant in an infant, from a human donor. He went on to perform 375 more over the course of his career, as well as other types of pediatric heart surgery. He continued operating until 2017.

Because of growing ethical concerns about experimenting on primates, research on using them as a source of organ transplants has mostly been abandoned. But efforts are underway to genetically alter pigs to make their organs compatible with humans.

He graduated from Columbia Union College (now Washington Adventist University) in Takoma Park in 1964, and earned his medical degree from Loma Linda University School of Medicine in 1969.

In 1966, he married Nancy Schroeder, who attended nursing school while he went to medical school. She died in April. They had two sons, Brooks and Connor, who survive him, along with two granddaughters and his sister, Joan Bailey. Two brothers, Nelson and Donald, died before him.

Dr. Bailey’s lifelong passion for infant heart surgery began in the 1970s, while he was training in thoracic and cardiovascular surgery at the Hospital for Sick Children in Toronto and saw many babies die from congenital heart defects. He returned to Loma Linda University in 1976 as an assistant professor and performed more than 200 experimental transplants on infant research animals.

Nancy Bailey had left her nursing career to raise her sons, but later returned to work as a nursing consultant and then became the manager for the tennis player Bobby Riggs.

About a year after Stephanie’s death, Ms. Beauclair and her son, Beau, moved back to her home state, Kansas, to be closer to family. Years later, she had Stephanie’s body disinterred and moved to a grave in Kansas. She had two more children, now grown, and went back to school. She works full time as a nurse.

For a time, she remained close to Dr. Bailey and his wife.

“To think of all the children he saved over the years,” Ms. Beauclair said. “I always said he was the heart of hearts.”