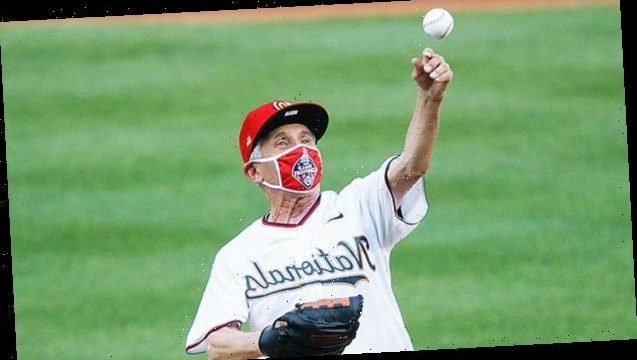 After the COVID-19 pandemic put sports on hold, Dr. Anthony Fauci, the nation’s leading infectious disease expert and medical professional leading the fight against the novel coronavirus, helped usher in the 2020 Major League Baseball season on July 23. Dr. Fauci, 79, got a chance to show some love to his native New York City by throwing out the ceremonial first pitch between the Washington Nationals and the New York Yankees on Opening Day. The pride of Brooklyn stepped up to the mound, and threw a pitch that went way wide and left. While his throwing aim was a bust, fans cheered that it was still more respectable than President Donald Trump‘s response to the pandemic that has killed over 146,000 Americans since March.

Interestingly, Dr. Fauci has now done something that President Trump hasn’t in his four years in office: throw a ceremonial first pitch. But that’s about to change. Just hours before Fauci’s first pitch, Trump told reporters at the White House that he’d been asked by Randy Levine, president of the New York Yankees, to do the honor at one of their games. The New York born tycoon announced that he’ll be throwing the opening pitch at Yankee Stadium on August 15.

While many publications have said Trump has broken an 110-year old tradition of presidents throwing out ceremonial first pitches, the Washington Post notes that this isn’t entirely true. Jimmy Carter reportedly didn’t throw out a pitch while in office. Presidents Bill Clinton, Barack Obama, and Ronald Reagan all threw out pitches, but at an irregular frequency.

“The Washington Nationals are thrilled to announce that Nats super-fan Dr. Anthony Fauci, Director of the National Institute of Allergy and Infectious Diseases, has accepted our invitation to throw out the ceremonial first pitch on Opening Day,” the team said in a statement on July 20. “Dr. Fauci has been a true champion for our country during the Covid-19 pandemic and throughout his distinguished career, so it is only fitting that we honor him as we kick off the 2020 season and defend our World Series Championship title.”

Originally, the 162-game 2020 season was scheduled to begin on March 26, but that was when the COVID-19 outbreak in the United States was ramping up. Now, the 2020 season will only be 60 games, and teams will not venture outside of their “regions.” The games will be played in empty stadiums (no fans), brawls are prohibited, and if a game goes into extra innings, runners will be placed on second base to ensure that everything ends on time. These guidelines have also prevented the Toronto Blue Jays from playing games in Canada since the country fears that frequent border crossings would lead to increased infection rates.

Though Dr. Fauci has ushered in the MLB season, he said in June that the “Fall Classic” should wrap up by the end of September. “If the question is time, I would try to keep it in the core summer months and end it not with the way we play the World Series, until the end of October when it’s cold,” said Dr. Fauci, per CNN. “This virus is one that keeps fooling us. Under most circumstances — but we don’t know for sure here — viruses do better when the weather starts to get colder and people start spending more time inside, as opposed to outside. The community has a greater chance of getting infected.”