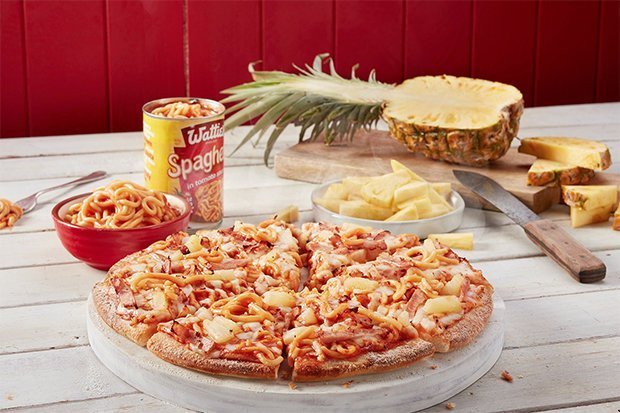 Pineapple on pizza has long been an ongoing controversy in the pizza world.

Whether you love the savoury cheese and sweet, crunchy fruit combo or are deeply offended by the concept, there’s no denying it inexplicably gets people very worked up.

President Johannesson of Iceland even went so far as to propose BANNING the toppings combination in 2017.

So we dread to think what he and his acolytes will make of Dominos latest offering.

Domino’s in New Zealand has stirred the pot by not only producing a pineapple pizza but also, bizarrely, adding CANNED spaghetti for good measure.

In a Facebook post, the company wrote: “This is no joke! We’ve officially added Hawaiian SPAGHETTI pizza to our menu for a limited time only, with help from our friends at Wattie’s NZ.”

Surprisingly some customers were keen to get their hands on one.

One fan commented: “Yummy, cant wait to try one”

Some were less enthused, with another quipping: “I’m not mad, I’m just disappointed.”

You may remember that Kiwi company Watties have form for this sort of thing.

Back in March, the food producer teamed up with Tip Top to create tomato ketchup ICE CREAM.

Clearly trolling the public with bizarre food pairings is their M.O.