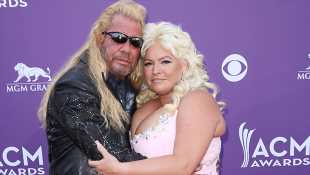 Duane ‘Dog’ Chapman says he’ll remember wife Beth most for ‘her love,’ and he promised her before she died that he’d never replace her. He explained why in our exclusive interview.

Duane “Dog The Bounty Hunter” Chapman made a promise to his late wife, Beth Chapman, before her death in June 2019. “Well, I am a man and I will have a girlfriend probably — but I will never get remarried. I promised Beth I would never get remarried,” he told HollywoodLife in an EXCLUSIVE interview. “I told her the same thing; if I were to pass away I told her, ‘You better not f**king get married! I don’t care what you do and how many boyfriends you got, but please don’t ever stand next to someone and say the vows.’ So, we both made a deal like that.”

“I am sure that means if I get a girlfriend and she’s ugly then Beth is going to be mad at me,” Dog added, laughing. “She was a very protective woman.” Dog said that he does believe that Beth, who tragically passed away after a years-long battle with throat cancer, is looking down on him and guiding him. “I hope that she is watching and I definitely feel her sometimes,” he said. “I do always think, ‘What would Beth say? Or what would she do?’” The couple’s highly anticipated new reality show, Dog’s Most Wanted, was filmed before Beth’s passing, and Dog says that we’ll plenty of his wife doing what she loved the most onscreen.

“It’s the most action-packed TV show we have ever done! And we go after America’s Most Wanted. We go after fugitives of all kinds — all sorts of scumbags, the real cream of the crop bad guys,” Dog said, excitedly. “I’m honoring [Beth] anyway that I can through this show, because she is my wife and I love her. With this show, she wanted America and her fans to show what it was like [living with cancer]. She wanted to be able to show fans how to beat it, and she never really did give up.”

Dog’s goal for Dog’s Most Wanted is to “make sure I am doing things that will make her proud. I need to be instrumental in doing that.”  He’ll have no problem with that whatsoever.