Global climate action is making big disruption inevitable for carbon-intensive industries and the future of some regional communities hangs in the balance despite the federal government’s promise they will be shielded from economic loss.

The federal government faces international pressure to increase its current climate targets ahead of the United Nations climate summit in Glasgow next month. The Prime Minister is aiming to commit to achieving net zero emissions by 2050, but needs to convince the National Party the policy won’t hit regional economies.

Many of the jobs in Australia’s carbon-intensive industries such as heavy manufacturing, agriculture as well as coal and gas exports are in regional areas. These sectors have not yet reduced their greenhouse gas emissions, even though Australia’s national emissions have fallen 20 per cent since 2005.

That’s because around 90 per cent of Australia’s emissions cuts to date have come from avoided deforestation – otherwise known as land clearing bans – while cheap renewables have flooded the grid to replace coal and deliver the remaining cuts to carbon pollution.

Prime Minister Scott Morrison has promised the Nationals that rural and regional Australia will be shielded from losses, and Energy and Emissions Reduction Minister Angus Taylor said traditional industries will power on for “many, many years” under the government’s plan to help fund industry to reduce costs and drive uptake of low-emissions technology. 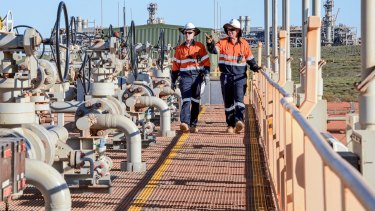 The PM’s commitment to reach net zero emissions by 2050 will disrupt regional industries like gas exports.Credit:.

But experts say it remains to be seen how cost-effective the replacement technologies are; if investors will fund them; and whether they deliver the same volume of jobs and economic output as existing industries.

“Someone’s going to have to pay for it and I don’t think governments will ever be able to fund it completely,” Mr Wood said.

Some of Australia’s biggest coal and gas customers, such as Japan and Korea, have set ambitious decarbonisation goals and Mr Wood said these buyers, not the federal government, would determine the future of Australia’s fossil fuel exports.

“Any business who thinks that they can make their own decisions about the future and bugger the customer, is almost certainly going to go out of business,” he said.

Nationals Senate leader Bridget McKenzie said on Wednesday regional people had been burnt by national reforms like the Murray-Darling Basin Plan and the sale of Telstra and warned there would be no deal with her party “unless it’s right for the regions”.

“There have been promises out of Canberra of perceived opportunities that haven’t been realised,” she told ABC radio. “The lived experience of people out there in the regions isn’t what was promised prior to those decisions being made.”

The ClimateWorks think tank released a report on Thursday that said if state governments deliver on their current emissions reduction targets Australia’s emissions will drop by up to 42 per cent by 2030, far higher than Australia’s pledge under the Paris Agreement to cut emissions by at least 26 per cent in the next decade, based on 2005 levels.

ClimateWorks said for Australia to act consistently with the global action required to limit global warming to 2 degrees, which is the minimum goal of the Paris Agreement, Australia needs to cut its emissions by at least 50 per cent by 2030.

Senior researcher Richard Posner said it’s “absolutely achievable” for Australia to help limit global warming to less than 2 degrees if “we go hard in every sector across every part of the country”.

That means assisting heavy industry to decarbonise and looking for new and emerging industries to “ensure regional communities remain competitive”.