The head of the independent Productivity Commission warned against a run-up in large budget deficits and a political drive for the country to become self-sufficient across key industries, saying they will leave future generations poorer.

Michael Brennan, in a speech to the Committee for Economic Development of Australia on Tuesday, said debt and increased protectionism were two dark clouds that could undermine the country’s strong rebound from the coronavirus pandemic. 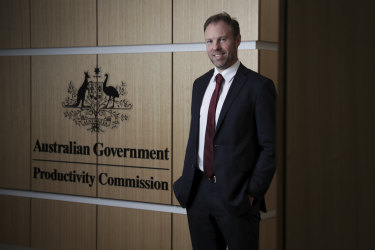 The May budget forecast a deficit of $106.6 billion in 2021-22 following a record $161 billion deficit in the current financial year. Treasury is not expecting the budget to return to surplus this decade, with debt hitting a record $1.2 trillion by 2030.

The government and the Reserve Bank have played down concerns about the size of government debt, noting low interest rates meant it was manageable. Both have argued as long as economic growth is higher than interest rates, the country’s debt burden will fall.

But Mr Brennan said there was a growing risk that this argument could be used to imply that debt and deficits no longer mattered and the country could afford further increases in debt.

Mr Brennan said the country needed to rebuild its fiscal buffers to fight the next emergency that might require more government spending.

There was also a risk that if inflation re-emerged, or interest rates started to rise, the government would be forced into a politically difficult reduction in expenditure.

“Successful fiscal consolidations in history are rare. They are not often popular. And they would likely be even less popular in a period of rising inflation or falling terms of trade or slow real growth or rising interest rates: but those are the very circumstances in which our currently favourable debt dynamics would reverse,” he said.

Mr Brennan said there was a cost to government spending that was measured in terms of the other areas on which it could have been spent.

“An infrastructure project that doesn’t pass a cost-benefit analysis, or a funding model that rigidly locks in an existing business model, or an industry program that diverts resources into a favoured sector, can all act to reduce growth and wellbeing,” he said.

“In other words, in addition to observing aggregate fiscal rules, governments have to ensure that their interventions (backed by coercive powers like taxation) are consistent with allocating scarce resources to their highest value.”

Mr Brennan said while it might make sense to borrow heavily now given very low interest rates, that did not mean it was right to bring forward significant consumption by borrowing heavily from the future.

He said there were substantial inter-generational costs that had to be considered, but the voices of future taxpayers were increasingly being discounted by immediate concerns.

Australia’s budget frameworks and budget rules had served the country well but they were at risk.

“If that public consensus fragments, or is undermined by ‘expert’ opinion, then gross debt is unlikely to stabilise at 51 per cent of GDP,” he said.

The other dark cloud cited by Mr Brennan was the growth and promotion of ideas of national self-sufficiency and sovereign capability.

Both sides of politics, led by Prime Minister Scott Morrison, have championed self-sufficiency in areas from personal protection equipment and vaccine production to multibillion-dollar defence projects.

But Mr Brennan said the death of free trade had been much exaggerated and a push to encourage domestic production was likely to undermine economic growth.

Productivity Commission research suggested just 2 per cent of Australian imports came from concentrated sources for which there were few substitutes and which flowed into essential industries.

Even at the height of the coronavirus pandemic, most of Australia’s PPE requirements were met from overseas suppliers.

“That is not to say vulnerabilities will never arise and that policy should not respond,” he said. “But as always it should be determined on the evidence and the particulars of the case, rather than a general claim that we can no longer rely on trade and have to make things here.

“We can’t make everything here but we could certainly make ourselves poorer in the attempt.”