In the 1990s, Denmark’s television screenwriters witnessed the explosion in American premium cable dramas like The Sopranos and Six Feet Under and turned them creatively inside out. The result was a boom in so-called “Scandi noir” which has, in many ways, been recycled back into the global television machine, elevating the form into its so-called “golden age”.

Surfing the wake of that tsunami of TV was a wave of American teen dramas, a sort of post-The OC generation of very polished but often superficial coming-of-age soaps about young angst. The new HBO drama Kamikaze is, to some extent, the same cultural response to the American teen drama genre: dark, complex and almost overwhelming. 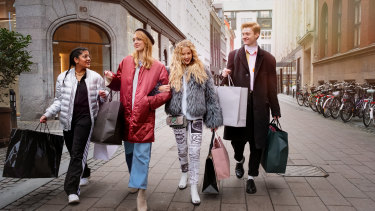 The carefree world of Julie (Marie Reuther, third from left) is about to implode in Kamikaze.Credit:HBO Europe

As the series opens, we meet Julie (Marie Reuther) – no surname – a young girl living in the comfortable glow of her family’s evident wealth. She is surrounded by a group of friends whose quiet pause when the lunch bill lands suggests they are accustomed to Julie picking up the tab. Shown off to great effect in several slow-motion sequences, they could be Junior Sex and the City.

And then a cataclysmic event occurs: Julie’s parents and brother are killed in a plane crash, and as the series progresses, Julie undergoes a dramatic transformation. In some ways, it is like watching a butterfly’s life in reverse: she begins the story with large colourful wings, but as events unfold, the colour palette changes to something darker and more neutral, and the show’s tone with it.

“At the beginning of the series, there are a lot of changes of outfits,” Marie Reuther says. “It shows that it has importance to her, but throughout the series, she wears more and more the same [single outfit of] clothes. She’s not occupied by her outfits any more. It’s like, you take these worthless things away and you are more pure and naked, in a way.”

That transformation also taps into one of the key themes of the series: that without her family around her, Julie’s seemingly perfect world of a massive home, expensive possessions and limitless clothing is virtually worthless, forcing her to re-evaluate her understanding of value.

“[She’s] a girl who has everything in terms of finances and materialism, but when it all comes down to everything, she has nothing because she doesn’t have her family,” Reuther says. “It’s not as important any more. Of course, it gives her more opportunity to go out and explore the world because she has the money to do that, but it’s not what it’s really about.” 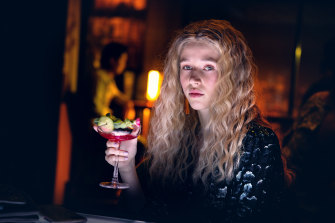 Julie’s (Marie Reuther) charmed life is upended when her family is killed in a plane crash, prompting her to reassess every element of her being.Credit:HBO/Binge

What she finds, Reuther says, is a different kind of life. “Honestly, I think she’s happy in another way. I don’t think she’s necessarily happier … Julie becomes more in contact with herself, with her feelings, and she begins to reflect upon what’s important in life. We have this saying in Denmark, the people who don’t think as much are maybe better off because they’re carefree.

“Maybe from the outside, Julie cared about her wardrobe and her friends and cute boys and parties. And she did not think about what life is really about,” Reuther adds. “But maybe those people who don’t have to ask themselves those questions are happier. So, it’s hard to give a simple answer.”

The series is based on the novel Muleum by Erlend Loe. Some actors are hesitant to pick up a source text, lest it undermine decisions made by the screenwriter, but Reuther kept the novel on set with her, aided enormously, she says, by the fact that it is written in a diary format.

“For me, it was very useful,” Reuther says. “I’ve always been a big fan of [Erland Loe]. And the book is written in a diary form, so I was just given her whole mindset. And I read it many times and I noted, how does she relate to the whole world, to her friends, to her family who she knows, who is she most close to?”

Julie's fictional diary also gave Reuther the tools to play Julie in the aftermath of her grief, clutching at memories of her family provided by the diary Loe had written. "When you lose someone you've been close to, the things that can remind you of them, I tried to build that, and also [use it to build] that lost in the universe feeling."

The series was adapted by screenwriter Johanne Algren and directed by Kaspar Munk. Because Danish television series are made more like traditional film (as compared to American television shows, which are typically led by a writer/producer "showrunner"), Reuther says she depended mostly on Munk.

“The most important person on set was Kaspar, and Johanne, she wrote a wonderful script and that was our guideline, how to get through this crazy mosaic of scenes glued together for a whole story,” Reuther says. “But sometimes Johanne had written [something], but circumstances were different, so how do we solve this? That was a collaboration with Kaspar.”

In one of the first episode’s key setup scenes, the audience glimpses Julie’s family in their final moments. “We’re crashing. I love you. Do what you want. Dad”, Julie’s father texts in those last desperate flashes. Later, narrating the story, Julie says: “Depending on the speed of the plane, you either have minutes or seconds to act.”

Julie, Reuther says, is "so occupied with the future all the time, her family is occupied with plans and the question, what do you want? Success, friends, influencer vibe, stuff like that. But when you take all that away, if you don't think about the future, what will you do now?"