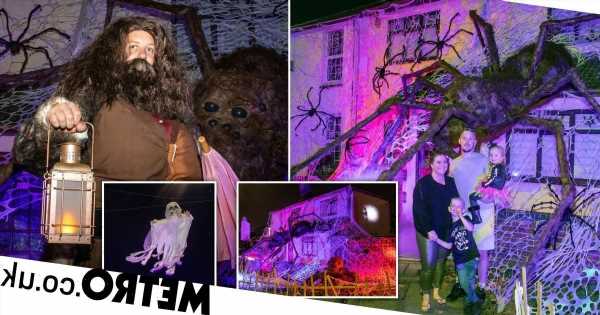 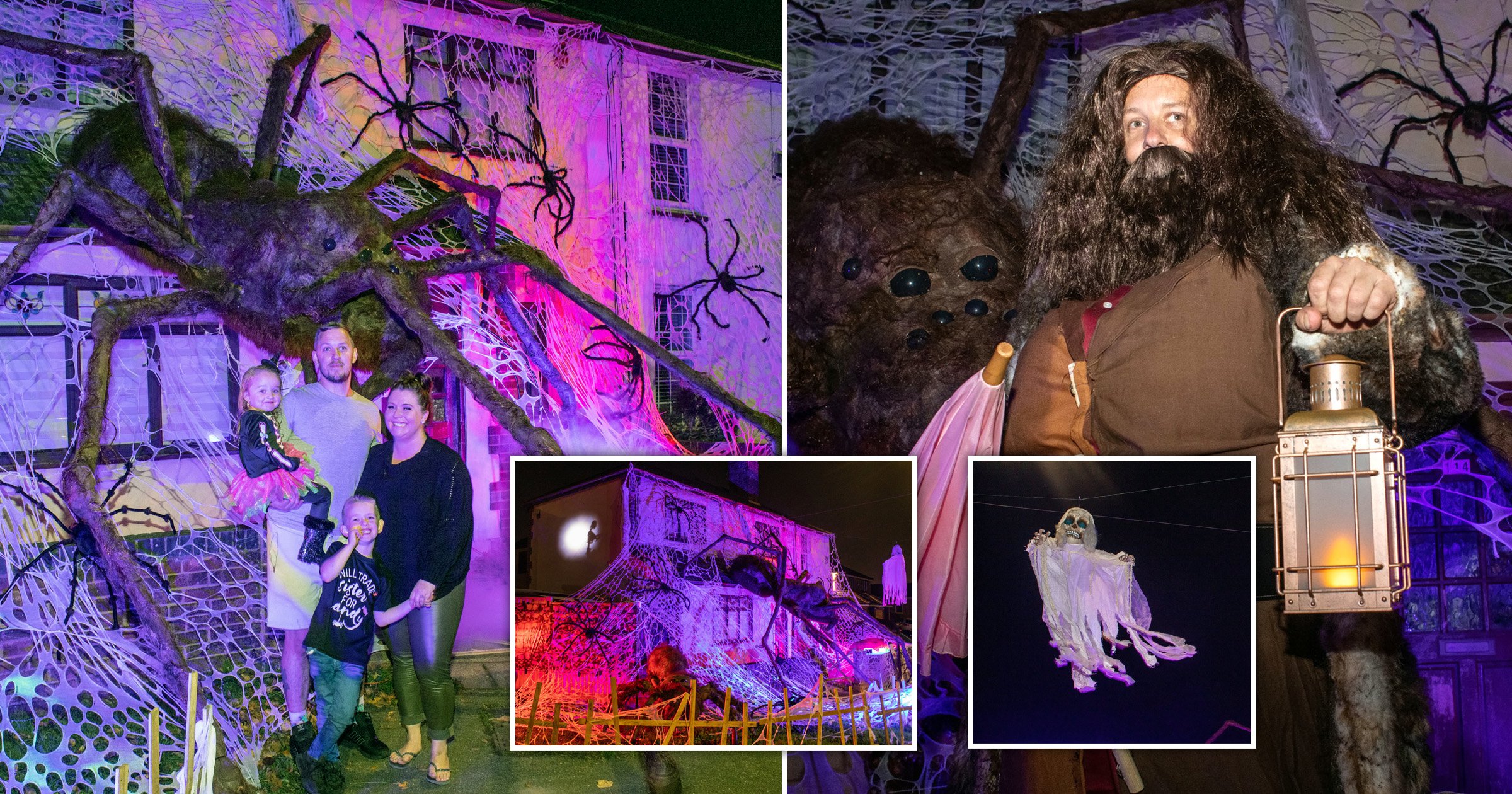 A dad transformed his family’s home with epic handmade Halloween decorations – including a £1,000 giant spider – to raise cash for charity.

Mr King and his family start preparing for their Halloween display during the summer, with most of the decorations being handmade.

‘Apart from the black spiders and inflatable tree, I made everything you can see,’ the escalator engineer and carpenter said.

‘Every year I build on the last and it just gets bigger and bigger.

‘This year we have different skeletons which I made, some rotting flesh and an eight foot demon.’

His partner, Becky Cross, and two children, all joined in to bring the spooky house to life – A Halloween tradition Kieron been doing for the past six years.

‘I’ve always enjoyed fancy dress parties and stuff,  so when Halloween came around at the time my kids were at the right sort of age, we all got together and started decorating the house,’ he said.

For Kieron, it wouldn’t have been possible without his kids.

‘Everything I have made here the kids have helped out with,’ he explained.

Of course, the creation of such an extravaganza does come with some large costs.

According to Kieron, the big spider ‘probably’ cost around £1,000 to make – but creating it was a learning curve.

He said: ‘I learnt from my mistakes from last year, as last year I made a smaller spider out of expanding foam, which cost a fortune.

‘This year, I found some polystyrene in a skip and glued it all together to make a big block and I carved the body and the head out of it.’

It brought the costs of making the spider down and gave him a way to recycle polystyrene that could’ve been wasted.

The idea to raise money for charity came last Halloween when people started offering money to look at the display.

Last year the family raised just under £2,700 in three days for the Children’s Hospice called Demelza.

They are now determined to do even better – last year, people were just giving change while for this Halloween, he’s got a fundraising page setup to beat the previous total.

At Christmas, Mr King also joins his motorbike club on a charity ride, where he visits the hospice dressed as Santa and snowmen and delivers presents.

He hopes that the children from Demelza will be able to pay the spooky house a visit this year.

‘Last year they were too unwell and it was too close to Covid, but I have spoken to the staff and they are planning on bringing them over,’ he said.

The family hopes that the house can provide some joy, excitement and some screams over the Halloween period.

‘Everyone has been miserable through Covid because we haven’t been able to go out and do anything,’ he said.

‘Last year and this year are the first proper Halloween since then, so we just want to give people something fun to do.’

The family also goes all out for Christmas, covering the house with lights and putting up a nine-foot gingerbread man and Santa in the front garden.

Kieron is already thinking about the next gruesome surprise he can come up with for next year, and he is open to suggestions.