Six months is a long time in politics.

Back in March, Matthew Guy, the man most likely to lead the Coalition to the next state election, promised Victorians there would not be another leadership challenge before polling day in November, 2022. 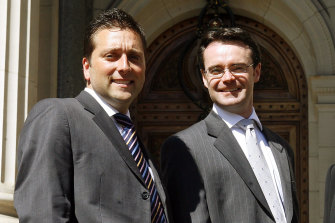 All smiles in 2006 when Matthew Guy and Michael O’Brien were first elevated to the Liberal frontbench.Credit:Paul Rovere

"Michael will be there at the election, we'll fight this thing out with him. I can't be any clearer than that," he said at the time.

It wasn’t true, of course. It’s the rhetoric recited by all soon-to-be challengers ahead of any political assassination. And few politicians or pundits believed him.

Guy’s motivation to support Michael O’Brien in March was driven by the fact he was caught off guard when fellow frontbencher Brad Battin unexpectedly launched a coup.

Like a scorned lover, Guy felt that if it wasn’t his for the taking, then it couldn’t belong to anyone else.

O’Brien won that contest 22 votes to nine, and Guy’s support was integral to his success. But his days were numbered from the moment the votes were cast. Battin may have lost, but his challenge exposed a substantial rift in the party and set out a blueprint for Guy’s return.

After his victory, Guy was one of the first to join O’Brien in his office and was key in convincing him that he should sack those members of the shadow cabinet who had betrayed him. He then spent the months that followed quietly securing their support.

If a spill motion goes ahead on Tuesday, and that remains an “if” given O’Brien’s precarious position, Guy is expected to win, having secured between 17 and 21 of the 31 votes available.

But it didn’t happen overnight. 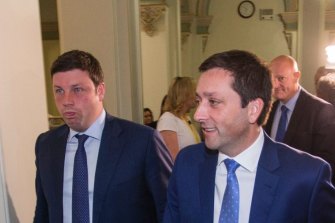 By contrast, O’Brien largely dismissed reports of leadership tensions and his allies, including his deputy Cindy McLeish, failed to offer their man any protection.

With the partyroom split between Guy and O’Brien, Guy knew he would need the backing of that third key faction wallowing on the backbench and who were responsible for the March coup.

Discarded by O’Brien, the collective support of the group which includes one-time shadow ministers Battin and Ryan Smith as well as Nick Wakeling and Richard Riordan, would be key to whichever candidate wanted to lead the Coalition to the next election. 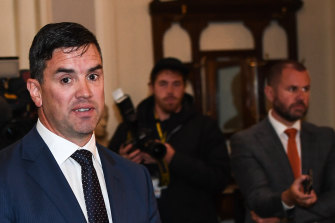 Brad Battin after his spill motion was voted down in March.Credit:Justin McManus

O’Brien may have realised it, but whether through wilfulness or naivety, he did little to regain their support. Guy, on the other hand, stepped up his efforts over the winter break repairing his relationship with Ryan Smith, which had soured in recent years.

To put it simply, Guy gets politics.

This goes some way to explaining why he has been able to convince so many of his colleagues to back his return despite such a convincing loss in 2018.

He may have suffered a crushing defeat, but Guy can be a formidable opponent, and he is also a charmer. Even Labor describe him as a savvy operator who cannot be underestimated.

By contrast O’Brien is smart, stable and strong on policy, but lacks the pizzazz and punchiness of Guy. As one former Liberal colleague put it, “O’Brien’s a good, honest and straightforward guy but that’s sadly not enough.”

In the end O’Brien’s leadership was hindered by a lethal mix of his own stubbornness and by circumstance. He failed to inspire his partyroom and maintained a head-in-the-sand response to critique and criticism.

In the fight of his political life, O’Brien has also reminded colleagues of the circumstances he had found himself in, explaining the difficulty of leading an opposition in an unprecedented health crisis.

It's a tough lesson Matthew Guy could be about to learn firsthand.